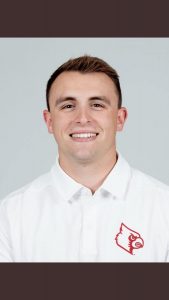 Seth Tatum was a three sport athlete when he attended Mercer County Senior High School. His love for the game of basketball has lead him to the University of Louisville, where he is a manager for the men’s basketball team under Head Coach, Chris Mack. (Image submitted.)

As a manager with the Louisville men’s basketball team and a participant in their bubble-like protocol to protect from COVID-19, Seth Tatum won’t be able to celebrate the holidays with his family in the traditional way. The 2017 graduate of Mercer County Senior High School is in love with the game of basketball and says he could not pass up the opportunity to be a manager at the University of Louisville.

Tatum initially attended Louisville in pursuit of a career in pharmacy, but over time he has come to understand that God is calling him toward a career as a basketball coach.

Growing up in a household of Cardinal fans, Tatum jumped at the opportunity to learn from Division-I coaches. His father, Spencer Tatum, was also a Division-I basketball manager, as well as a coach, at both Harrodsburg High School and Mercer County High School. Spencer managed under  the  Kentucky men’s basketball coach at the time, Rick Pitino, and is currently the principal at Mercer County Senior High School.

“When I was offered the opportunity to be a manager at UofL, I could not pass it up. It was an opportunity for me to go to school, still be a part of a team and a sport that I love and learn from the very best,” said Seth.