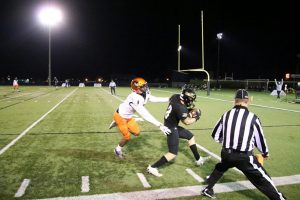 The Harrodsburg Herald/Sam Warren
Senior Luke Sheperson slipped past the defender to score for the Rebels Friday night against Hopkinsville.

The Boyle County High School football program is one win closer to earning their ninth state football championship in 21 seasons. The Rebels (9-0) routed the Tigers of Hopkinsville (7-3) 55-0 with a dominating display on both sides of the ball this past Friday, Dec. 11.

Hopkinsville proved an unworthy opponent as the Rebels tallied 542 yards of offense on the night and triggered the running clock on the first drive following the halftime intermission. Senior running back Will McDaniel showcased his electrifying ball-carrying ability, as he often has in 2020, rushing for 160 yards on 18 carries. The two-year starter has been a leader on and off the field for the Rebels this season, drawing high praise from first-year Head Coach Justin Haddix.

“Will is one of the leaders on our team and has been from the very day I saw him in the weight room! He understands the expectations we have for him and this team. Will knows it takes a whole team to win the big one and he would be the first one to tell you that. He doesn’t care about stats. He just wants to win,” said Haddix.

McDaniel carried the Rebels to their first three scores of the game, finishing off the first drive with a 2-yard touchdown run. Kicker Jackson Smith, who received a Division-I offer from the University of Kentucky this past July, missed his first two extra-point attempts to the dismay of the Rebel sideline, as the kicks missed by a narrow margin and seemed to have crossed between the uprights. This game wouldn’t be decided by such a fair margin though, and on the following drive, McDaniel rushed three times for a total of 43 yards to put the Rebels ahead of Hoptown, 12-0.

Just over a minute of action passed before McDaniel carried the ball again, this time scoring on a 38-yard run, and extending the Rebel’s lead to 20-0 following a successful two-point conversion attempt, with 4:05 remaining in the first quarter.

The Rebels were no less impressive on the defensive side of the football, holding the Tigers to just 79 yards of offense throughout the game.

Cole Lanter did well to bring a later Hopkinsville drive to an abrupt halt with an interception just outside of his team’s own endzone. Later in the first half, it was Lanter who found himself on the end of a 9-yard Jagger Gillis pass for the Rebel’s fourth touchdown of the night, making the score 26-0.

Gillis kept it on the ground for Boyle County’s next score, rushing from 15 yards out for his third rushing touchdown in the last two games.

A 38-yard field goal attempt by Smith was missed just before halftime, and the scoreboard read 33-0 as both teams prepared for the second half.

Boyle County triggered the running clock on the opening drive of the second-half following a 40-yard connection between Gillis and Lanter, Gillis’ (24th) passing touchdown of the season.

Finishing off the scoring for the Rebels were senior running backs Eli Glasscock and Cas Phillips. The 55-0 scoreline is one of the most one-sided matchups ever seen at this stage of postseason play, and Boyle County seems to be playing their best football as they prepare to face the Franklin County Flyers with an opportunity to avenge their one-point loss to Johnson Central in the final game of last season.

Franklin County is soaring into their final game of the season. Electrifying athletes like Fred Farrier, Zach Claudio, Kaden Moorman and prolific quarterback Nick Broyles, who’s 272 yards per game, 73 percent completion rate and 26 touchdowns without an interception make him one of the most efficient offensive weapons in the state, are leading the Flyers to their deepest-ever run in the KHSAA state football playoffs.

Since Eddie James took the position as head coach of the Flyers in 2017 his team has won 35 games while only losing 11. This is now the furthest any Franklin County side has ever advanced in the playoffs, and Haddix finds it is largely due to their ability to create big plays. Farrier, Claudio and Moorman have combined for 34 offensive touchdowns this season, not to mention Claudio’s four defensive touchdowns this season, and one punt returned for six.

“Franklin County is a very good football team. Great players and very well-coached. We have to limit the big play from their athletes,” said Haddix.

Haddix has experience competing at the highest level of Kentucky high school football. His Corbin team’s in 2015 and 2016 reached the semifinals of the Class 3A playoffs, and in 2017 made an appearance at Kroger Field, only to fall to then competitor Boyle County. Again in 2018, the Corbin Redhounds had the opportunity to clinch their first state title in 38 years but were bested by one point in a 20-19 loss to Central. Continuity has been key to the Rebel’s success so far this season, and according to Haddix if they want to complete the year undefeated, his team must perform exactly how they have in their first ten games.

“We just have to do what we do. Every team is different. Every year is different, this has been the wildest,” said Haddix.

Boyle County football has been the epitome of success so far in the twenty-first century, and the tradition built by great coaches before him is an inspiration for Haddix to grow it even further.

“The tradition here and expectations is what drew me to this place! We have a great foundation built here before me with Coach Smith and Coach Pardue and I just want to make it better. It takes everyone to improve it and keep it there. Great players, great assistant coaches, community and school support are all needed to keep it growing,” said Haddix.