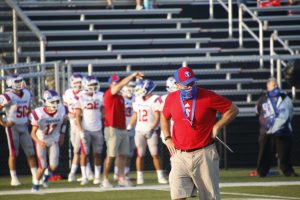 The Harrodsburg Herald/Sam Warren
Coach David Buchanan was named class 3A coach of the year for the second consecutive season.

Following the Mercer County Titans 23-7 loss in the second round of the KHSAA Class 3A football playoffs, the Titan’s record was 7-2. A 77 percent win rate, the highest win rate in the program since 2006, the 15-0 state championship winners.

While the Titans weren’t able to play a full 10 game regular season schedule, through nine games, they won at a higher rate than any season coached under Head Coach David Buchanan.

Mercer County’s program has established itself in a district that many thought was a level ahead of the Titans. After a successful season many awards and plaudits have been given to Titan players and coaches.