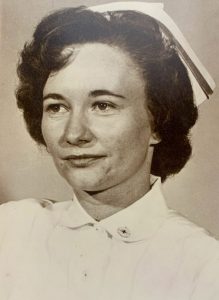 On Dec. 7, Marie Sanders Claunch White left this world to enter into the arms of her savior Jesus Christ.

Marie Claunch was the daughter of the late Henry B. Claunch and the late Martha Patterson Claunch, and she spoke often of her childhood growing up in Dixville, noting many adventures with her beloved brother, Bural.

Marie was a red-haired, green-eyed girl who attended Rose Hill High School and was in the last graduating class in 1955.

Marie studied nursing at the Danville School of Nursing.

Marie married the late Marshall (Pete) Sanders and raised four children, eventually moving to Burgin. Marie worked as a nurse at James B. Haggin Memorial Hospital where she met and cared for many in the Harrodsburg area. Later on, Marie would retire form Homestead Nursing Home in Lexington, where she would meet and marry Lee M. White of Lexington.

Marie wasn’t the grandmother known for baking or knitting, although she was the first to offer whatever she had to those in need and to lift up family in prayer and those prayers are ongoing and being answered now and for many years to come.

Her life on earth wasn’t ideal, but she endured to the end giving and receiving love, warmth, good humor and compassion.

Our mother is loved and admired and will be missed by those that know the value of a kind and gentle soul.

“When heaven draws its curtains and pins them with a star, remember I will love you…no matter where you are”

In lieu of flowers or contributions, the family wishes for expressions of sympathy to be made to support Hospice and or the battle against dementia.