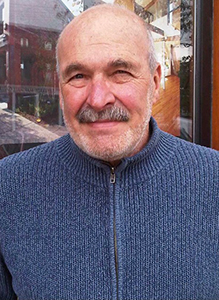 Tim Peters, age 77,  husband of Lois Mateus, passed away at home peacefully and quickly of a heart attack on Sunday, Dec. 6. Born at Fort Benning, Georgia on Aug. 24, 1943, he was the son of Gen. Roy W. Peters and Irma Ranscht Peters.

Tim grew up in Milwaukee, Wisconsin, where he attended Rufus King High School and  played football at the University of Wisconsin before joining the Army in 1965, serving in Vietnam where he received two Bronze Stars and a Purple Heart. He held various other posts in Maryland and Fort Knox before leaving military service in 1975 as an Army captain. A proud veteran, he was a graduate of the University of Louisville.

After leaving the army, he established the T.C. Peters Construction Company in Louisville and began a stellar career as a general contractor, developer  and construction manager.

Tim was a champion for adaptive use of old buildings, completing dozens of historic renovations and restorations, including the Muhammad Ali homeplace, the Kentucky Museum of Art and Craft, the Edison House, the Barn at Yewdell, the Mill at Wolf Pen Farm, Neubaurer Drug Store,  Chestnut Street Library, Early Times Distillery Break House, the Middleton Barn, Creation Gardens Market Hall, the Elijah Pepper House at Woodford Reserve Distillery, the Penthouse at 21c Museum Hotel, several Wayside buildings in the 800 block of East Market and numerous buildings on the Sacred Heart Campus in Louisville. He was  Louisville’s first LEED Platinum builder with the Green Building.

After purchasing farmland in Mercer county in 1994, he built St. Andrew Catholic Church and the Mercer County Public Library, and completed the restoration of the Fiscal Court Building. He and  his wife  have restored seven historic buildings in downtown Harrodsburg since 2011. In the late 1990s, spurred by the Kentucky Heritage Council and the James Harrod Trust, he moved and restored what is believed to be the state’s oldest Pennsylvania Dutch style bank barn to the couple’s farm, saving it from destruction at its original location in the local industrial park.

A recent Rotarian, Tim served on the Harrodsburg Mercer County Chamber of Commerce and was a governor’s appointee to the Kentucky Heritage Council. He previously served on the boards of Louisville’s Preservation Alliance, Operation Brightside, High Hope Steeplechase, Preservation Kentucky and the Kentucky State Board of Housing, Building and Construction.

He was a member of the James Harrod Trust, the National Trust for Historic Preservation, the Kentucky Historical Society’s Lincoln Society and Slow Food Bluegrass. He was an owner and member of the executive committee of Village8/Baxter Avenue Apex Cinemas in Louisville and one of the developers in the NuLu East Market District.

Tim was a passionate gardener and lover of wildlife. He enjoyed cooking, reading history and English literature and long walks and drives with his Border Collies. He was brave, handsome, honorable and hard working, kind and considerate to everyone he met, warmly welcoming friends to Tallgrass Farm.

In addition to his wife, he is survived by two sons, Dr. Timothy Duncan (Susan) Peters and Douglas Peters; and three grandchildren,  Rosemary, Henry and Elliott Peters. Also, several nieces and nephews.