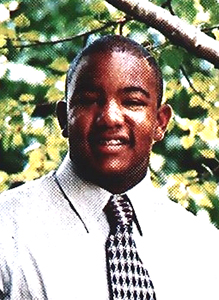 Born Feb. 9, 1981, in Harrodsburg, he was a 1999 graduate of Harrodsburg High School, attended the University of Kentucky for four years, was a hospitality manager working at several locations including the former Happy Days in Harrodsburg and Lexington and most recently Danville’s Hampton Inn. He enjoyed dancing, was an avid fan of Janet Jackson and the UK basketball team and attended the St. Peter AME Church and Centennial Baptist Church, both in Harrodsburg.

Survivors, in addition to his parents, include: his grandmother, Ruby Meaux of Harrodsburg; two uncles, Ricardo (Frances) Meaux of Lawrenceburg and Shawn Meaux of Los Angeles; three aunts, Lisa Meaux of Lexington, Pat Linton and Liz (Melvin) Ison, both of Harrodsburg; six special cousins, Lamont Linton, Kristi Blackford and Melvin Ison Jr., all of Harrodsburg, Earl Matthew Sims of London, Venus Griffin of Lexington and Lance Meaux of Fort Wright; special friends Nicole Jones of Harrodsburg and Whitney Johnson, Shakira Faulkner and Ashli Dunn, all of Lexington; a great-aunt and uncle, John and Martha Cunningham of Lawrenceburg; and a host of other cousins and friends.