Education was the most important factor in Baxter’s decision; he believes Marshall University’s physical therapy program is ideal, saying that “graduating from college and getting a degree is way more important than playing baseball.”

Baxter is 6’3″ and is capable of throwing an 89 mile per hour fastball so it is not surprising college coaches showed strong interest in the Admiral’s standout pitcher. The Thundering Herd coaching staff, however, stood out to Baxter because of the great connection he made with the staff throughout the recruitment process.

“The baseball coaches have always shown a lot of interest and I just feel a great connection with them. Also the new baseball facility is going to be amazing too,” said Baxter, who was most concerned about having a coach who was invested in him.

Baxter believes “the man above” had the biggest influence on his life up to now, saying He was most important.

Another big factor in his development is Danville Baseball Head Coach Paul Morse. Morse has coached Baxter since he was 6-years-old.

Baxter has hefty expectations for the Admirals this season saying “this season I want to help my team win state.”

Baxter plans to always compete when on the mound and soak up all of the coaching he gets from what he believes to be a pitching staff that is, “made up of great talent.” 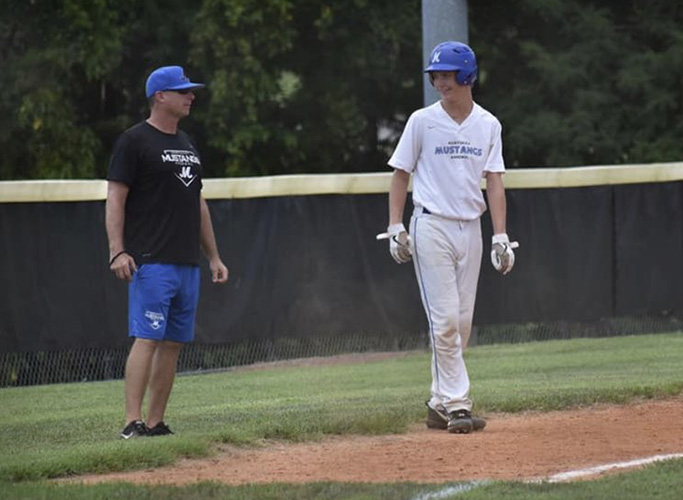 Two years ago the Admirals lost a thrilling 12th region championship game to the Somerset Briar Jumpers 9-10, and that feeling has grown according to Baxter, who is ready to help lead Danville to Whitaker Bank Ballpark.

“As a team, we all want to win the 12th region. We fell short of that two years ago, but the team put in so much work to get better. After that, we are going for the state title. We have so much talent on the team and I believe 100 percent that we can do that,” said Baxter.

Morse believes the Admirals pitching lineup may be one of the best Danville has ever had, and more than anything he is happy to see his student-athletes succeeding.

“It’s just awesome to see their hard work pay off,” said Morse, who was also referring to Baxter’s teammates, most notably Ethan Wood, a Louisville baseball commit, and Christian Howe, who recently committed to the University of Kentucky.

Baxter wants everyone in his life–family and friends– to know how thankful he is for them and their effect on his development.

“I also need to thank everyone at the Morse Baseball Academy. Josh Loughry, Blake Perry, CJ Lynn and Durane Elmore,” said Baxter. “Lastly I need to thank my teammates for always helping me get better. KJ Stanfield, Brady Morse, Christian Howe, Jack Simpson, Logan Smother and Trenton Taylor most definitely. Man, I love those guys and they have all pushed me to be the best player I could be.”