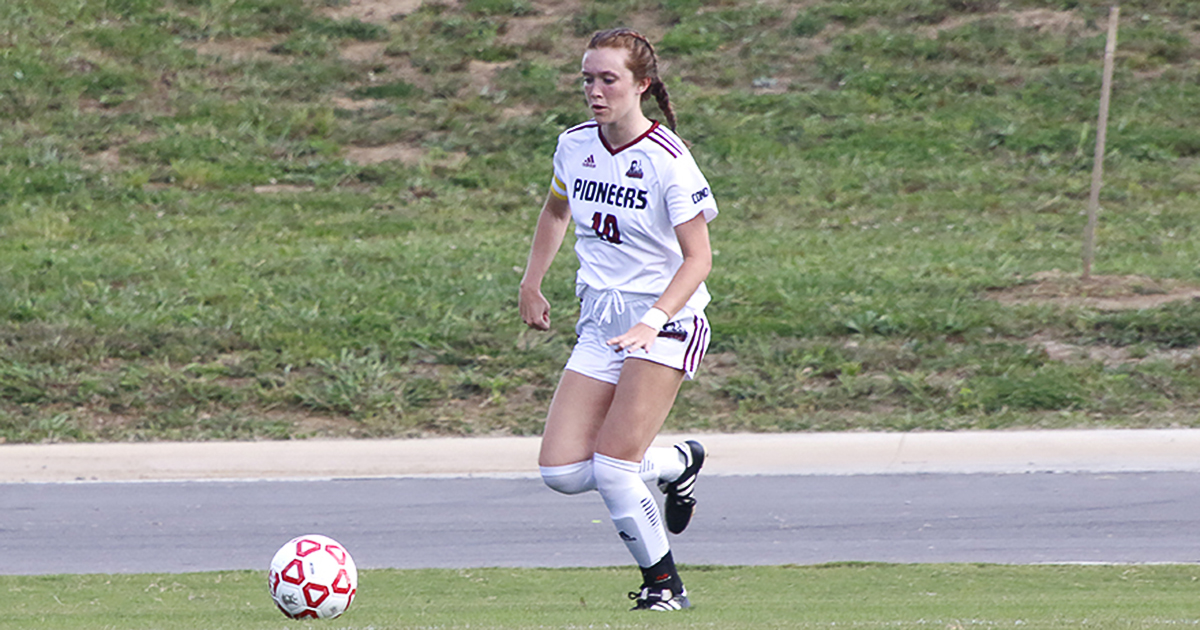 The Harrodsburg Herald/Sam Warren
Katie Turner scored both of the Pioneer’s goals against the Grace Christian University Tigers, the first two goals to ever be scored by the CU Harrodsburg program.

The CU Harrodsburg Women’s soccer team (0-1) christened their new field in the programs first ever match this past Friday, Sept. 25, against the Grace Christian University Tigers (3-1).

Unfortunately for the Pioneers, their first game ended in defeat, but Paul Brooks was happy with how his team played in their first time ever playing against 11 opposing players.

“Oh, it’s fantastic. No one knew what to expect, we’re playing a very established program and that team has gone to nationals several times in our conference. So you know, without knowing what to expect these girls have never played another 11 players before. The fact that they could keep the score where it was for a brand new program was remarkable,” said Brooks.

Jennie Sue found the net after 10 minutes putting the Tigers up 1-0, but freshman Katie Turner, the leading scorer for East Jessamine High School in 2019, found herself in a one-on-one situation with Tiger keeper Regan Befus and calmly placed the ball past the goalie, scoring the first goal ever by a CU Harrodsburg soccer player.

“Katie Turner scored a brace, two goals, so that will go down into history for her, and for our program,” said Brooks.

Jennie Sue poked the ball past Pioneer keeper Rylee Thomas in the 29th minute, making the score 2-1, and again just two minutes before the half, Hannah Heyboer sliced her way through the Pioneer’s defense to make the score 3-1 after 45 minutes.

“We have a lot of injuries so we only had one sub, so taking all that into consideration, it was remarkable,” said Brooks, who was coaching a team with a 12 player roster. “So the fact that we could score two goals on a formidable, established opponent is just fantastic for us.”

Another goal for the Tigers came in the 48th minute after the ball fell past the goal line from a corner kick. Hannah Heyboer got on the score sheet for the second time to finish off the scoring in the 59th minute.

Turner’s second goal didn’t change the outcome of the game, but it certainly solidified her as the Pioneers most efficient forward. She created nearly all of her team’s chances on the day and played a big part in keeping the game competitive.

Brooks says while the coaching staff obviously would have preferred a win, the team just wasn’t prepared. A lack of scrimmages and experience caused by this nontraditional offseason has really deterred the team’s full potential from showing, especially when you take into consideration that the Tigers of Grace Christian had already played three games.

“Obviously we would prefer to win but we think it was a sensible and true result,” said Brooks. “We’ll go back to the drawing board. [There are] a few things we have to tweak and fix but you can’t do that until you play your first game.”