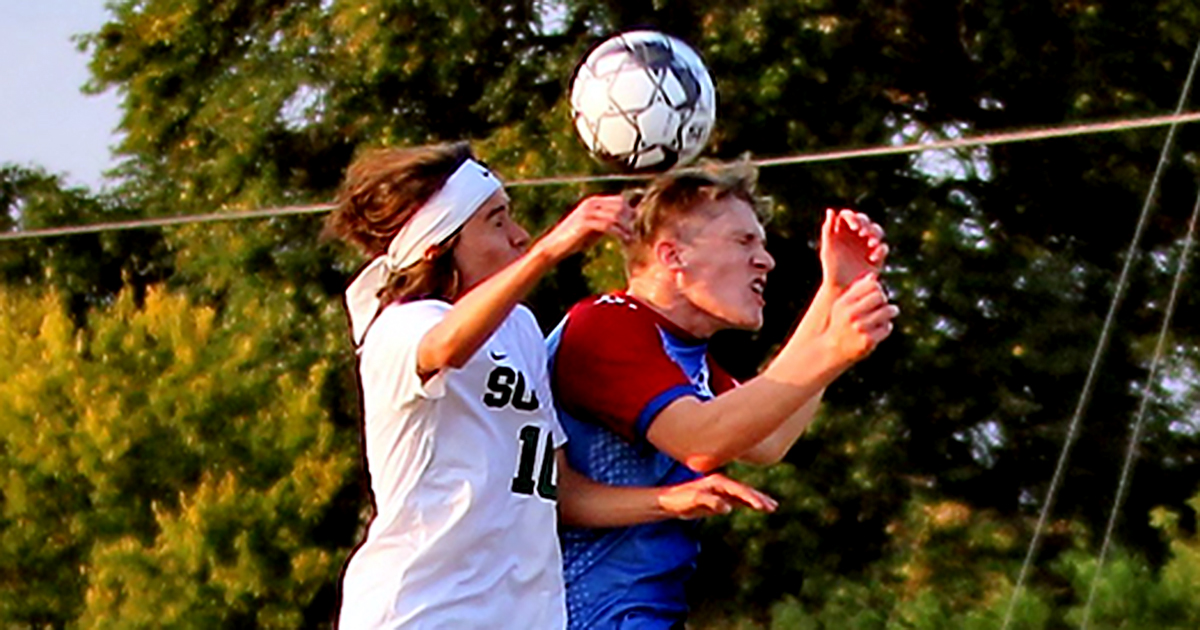 Despite a COVID-19-shortened regular season, the Titan boys soccer team held their senior night this past Saturday, Sept. 26, at the Mercer County High School soccer complex. Coming into Harrodsburg with an undefeated record were the South Oldham Dragons (3-0-1) from the 8th Region. Under normal conditions, Coach Garrett Stark would have selected a different opponent for the senior night festivities, but with a shortened schedule, every game is significant in preparing for the postseason.

The coaching staff had prepared the team for a week of three strong opponents, including a difficult 2-1 loss at district foe West Jessamine last Tuesday and a 3-1 loss at home against Lexington Catholic last Thursday night.  Stark expected both the seniors and underclassmen to play with a lot of heart throughout the game.

After 10 minutes of action, the Titans had a solid chance of breaking through into the scoring column, as senior Jamie Bordeaux sent in a corner kick, leading to a shot from senior Seth Eastman that was stopped by the South Oldham keeper. Just one minute later at the other end, Sam Reagan headed in the first goal of the night for South Oldham. The score remained at 1-0 for the next 15 minutes of play, but at the 14-minute mark, South Oldham struck again, this time off the foot of Spencer Kellems. Grayson Klehr and Kyle Kimberling added goals over the next few minutes of play, making the score 4-0 in favor of the Dragons.

The Titans finally got on the scoreboard at the 4-minute mark of the first half, as Forte Bess played a ball to senior Jeron Winchester, who sent it into the net to close the Titans to within three, 4-1. There was one more scoring chance for the Titans as Bordeaux was fouled attacking the goal with less than a minute left, leading to a yellow card and a scoring chance for Mercer County, but it was turned away by the South Oldham defense, ending the action of the first half.

South Oldham began the second half with several shots in an attempt to put the game away, but each was stopped by Titan goal keeper Aiden West.  Forte Bess had an opportunity to close the gap with a breakaway scoring chance, but his shot was turned back by the Dragon’s goalkeeper. To the dismay of the home crowd, at the 54 minute mark in the second half the ball deflected through the Titan defensive line and was struck home by Caleb Scheben for a 5-1 Dragons lead. There were scoring chances by Winchester, Sam Walls and Gavin Wilson, but it took until the 62 minute mark for Winchester to score his second goal of the night off an assist from Taylor Booth, making the score 5-2.

The Titans had a few more scoring opportunities, but finished on the losing end, 5-2. Mercer County ended the game with 20 shots on goal, 13 of which were on frame, three opportunities from corner kicks and Aiden West totaled 10 saves.

Seniors Sammy Berger, Jamie Bordeaux, Chris Day, Seth Eastman, James Johnston, Orlando Roblero, Aiden West and Jeron Winchester were recognized along with their families before the match. Coach Stark spoke about their contribution as a class to the soccer program.

“It’s an emotional night every time you have senior night, but these guys have really worked hard over their four years of being here. I’m very proud of them as soccer players, but also the young men they’ve become,” said Stark.

The coach credited his players for the way they battled their opponent.

“All of our seniors gave heart and played as hard as they could,” Stark said, “but it was good to see some of the younger guys out there on the field with them. We played a good team and I was proud of all of them for the effort.”

In looking ahead, Coach Stark hopes the team take the lessons learned this week and apply them in the weeks ahead.

“We’re going to take that momentum and be ready to finish out the rest of our regular season,” he said. “We’re going to hopefully be peaking at the right time for postseason.”