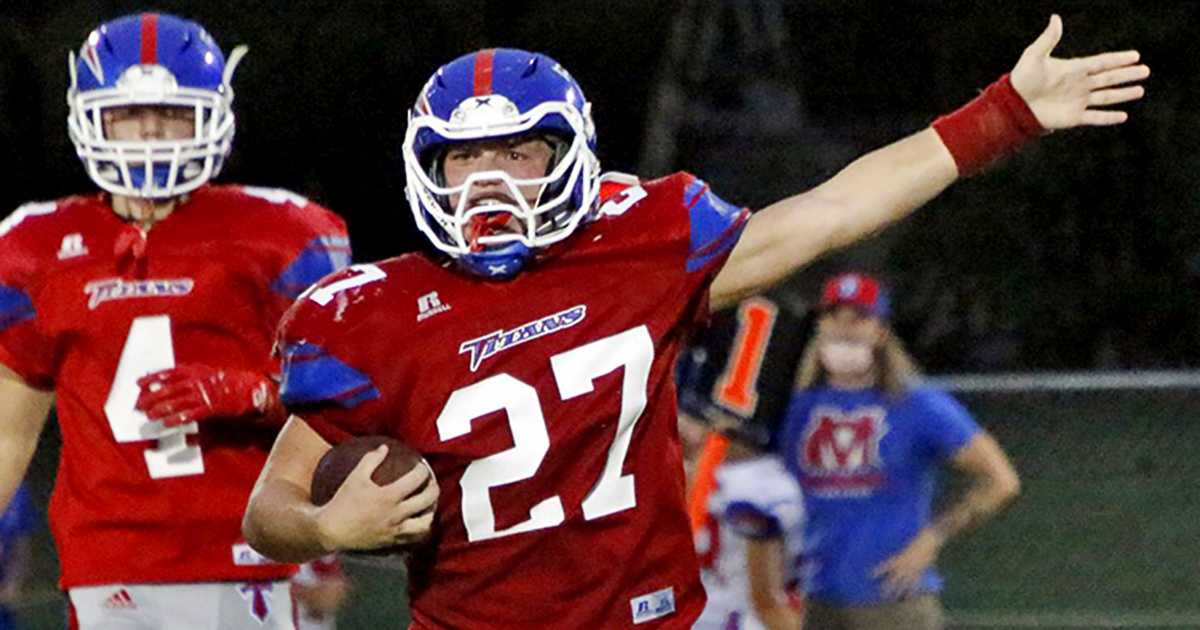 The Harrodsburg Herald/Sam Warren
Junior Wyatt Sanford signals for a first down during the Titans 31-28 overtime victory against the Christian Academy of Louisville.

The Mercer County Titans (2-1) defeated district rival Christian Academy of Louisville (1-2) this past Friday, Sept. 25, in a thrilling overtime victory that ended 31-28.

The Titans and Centurions were equal for most of the night, scoring their points in waves of momentum that would eventually be seized by the other team.

Senior Jalen Lukitsch recorded 103 total yards, two touchdowns and an interception on the night, making his case for being the most valuable player on the field. Lukitsch started the scoring, taking a pitch from quarterback Trosper Buchanan through heavy traffic and into the end zone on a 15 yard run scored with 4:42 left in the first quarter.

CAL stuck with their bread and butter, passing the ball and eventually quarterback Connor Clayton Masters found junior wideout Easton Messers open deep down the middle of the field for the Centurions first score.

Later in the second quarter, the Titans were forced to punt and senior punter Noah Davis did all he could to flip the field. A 61-yard-punt from Davis was made redundant on the following play when CAL running back Gage Geren ran 92 yards to the house. The Centurions missed the extra point and the Titans trailed 13-7.

The Titans didn’t pass the eye test, and the Centurion players that lined up on the opposite side of the ball were almost always larger in size, but Mercer County’s physicality and determination helped them score again before the half. The Titans ran the ball straight through the Centurion defense and eventually Brayden Dunn broke the plane, making the score 14-13 Titans, as the teams headed to the locker rooms. 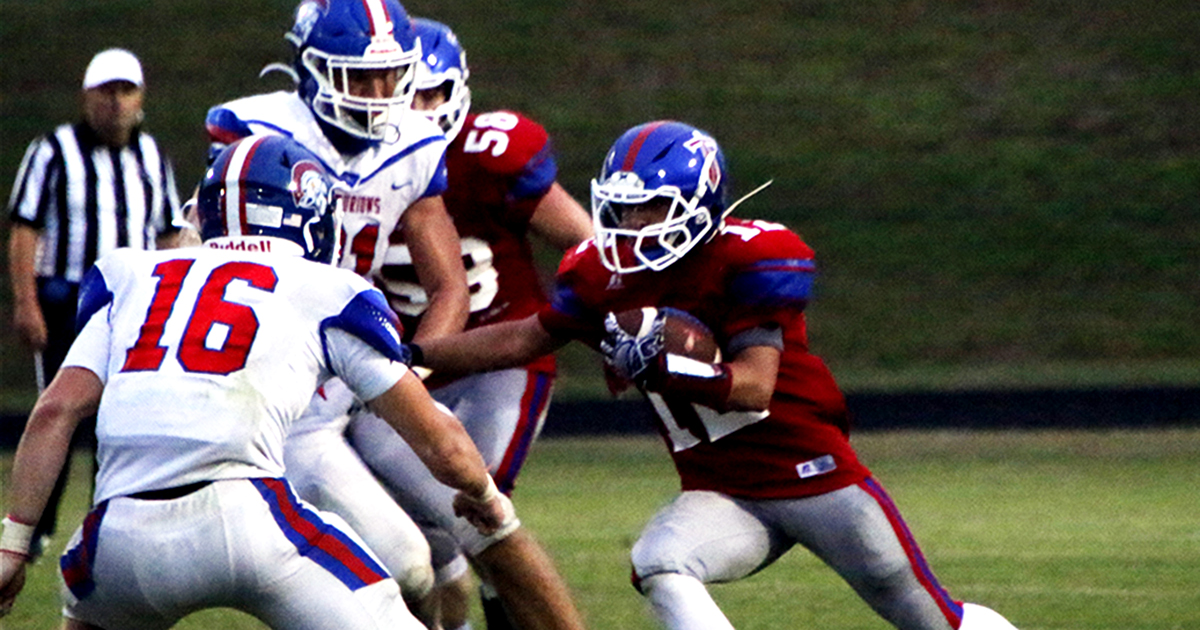 The momentum stayed with Mercer County, and six minutes into the third quarter, Dunn caught a Buchanan throw on a crossing route and hit the sideline, heading 30 yards towards the end zone. Neither team would score again until six minutes remained in the game. Lukitsch took the handoff 36 yards straight through the Centurion defense to the endzone making the score 28-13.

At this point in the game, it seemed like CAL had no chance of coming back. Mercer County had the momentum and a 15 point lead with only six minutes left, but complacency nearly  cost the Titans.

The Centurions converted through the air with 2:42 remaining, and still the game was Mercer County’s to lose. The Titans only needed two first downs to put the game away, but on third and seven with 1:42 left in the game, the handoff to Dunn was fumbled and the Centurions recovered just 43 yards from the Titan goal line.

Easton Messer capped off the drive with another touchdown reception and CAL made the two point conversion look easy. They had clearly retaken momentum as the two teams prepared for overtime.

The Titans won the toss and elected to play defense. Mercer Head Coach Buchanan praised the Titans’ defensive efforts against the Centurions.

“I thought they did a wonderful job. I was pleased with them,” Buchanan said. The Titans defense were relentless throughout the game and counted on great plays from various players to get the result they wanted. The Titans forced four turnovers on the night: two interceptions from junior Cayden Devine, another from Lukitsch, a fumble recovery from Bryce Walton and a big hit on third and nine from sophomore Thaddeus Mays to knock the game-winning catch out of the Centurion receiver’s hands. Each play were helped steal the  momentum from the Centurions and led to the Titans’ victory.

Mays’ pass breakup forced the Centurions to kick on fourth down and the kick floated wide right. The Titans would restart play on the 10 yard line, with a potential district title to play for.

Two negative yardage plays enforced by the CAL defense put the Titans in a bad spot, and after failing to convert on third and 12, the outcome of the game was in Davis’ hands, or more accurately, feet.

“At first I was very nervous, but once I lined up and took my steps, it was like a wave of relaxation, and it was like everything went silent,” said Davis. The game-winning 27 yard field goal was the second made field goal of Davis’ career, the other coming at the end of the Titans’ first match up with CAL last year, which also won the game for Mercer County.

“I had one of my best games I’ve ever played. A 62-yard punt and the game-winning field goal, it doesn’t get much better than that, definitely one of the best highs in life,” said Davis.

Lukitsch, like many of his teammates, had such a positive impact on the game for the Titans. Buchanan thinks it was because his team was more physical than they had been in the past.

“I thought he (Lukitsch) did a good job battling and this is part of what helped us tonight. I think we were a lot more physical and I thought that really helped us win this game,” the coach said.

“What I appreciate about our kids and our staff is how hard they have worked because when we got put in this district, people thought we had no prayer,” said Buchanan. The coach has now led his team to two wins against Christian Academy of Louisville, the 2018 class 2-A state champion, since they initiated their district rivalry in week six last season. Buchanan went on to thank the players and staff for surpassing certain people’s expectations for the Titan program after being moved to the district with two Louisville powerhouses.

“Our kids and our coaches have just worked like dogs to put us in this spot, and I’m just really proud of the hard work that’s gone into making us so much better,” he said.

Comparing score lines is not an efficient way to judge a team’s ability but the Centurions were tied with the Boyle County Rebels last week halfway through the third quarter. Seemingly, the Titans have taken a huge step forward since week one, when they lost to the Rebels 51-7.

“I think our kids have improved dramatically in the last two weeks,” Buchanan said. “The Boyle video was ugly, but we saw a lot of things that needed to be changed. We made those changes and our kids have really done a good job.”