EDITOR’S NOTE: The Mercer County Health Department has postponed the flu vaccination clinic until the end of October. 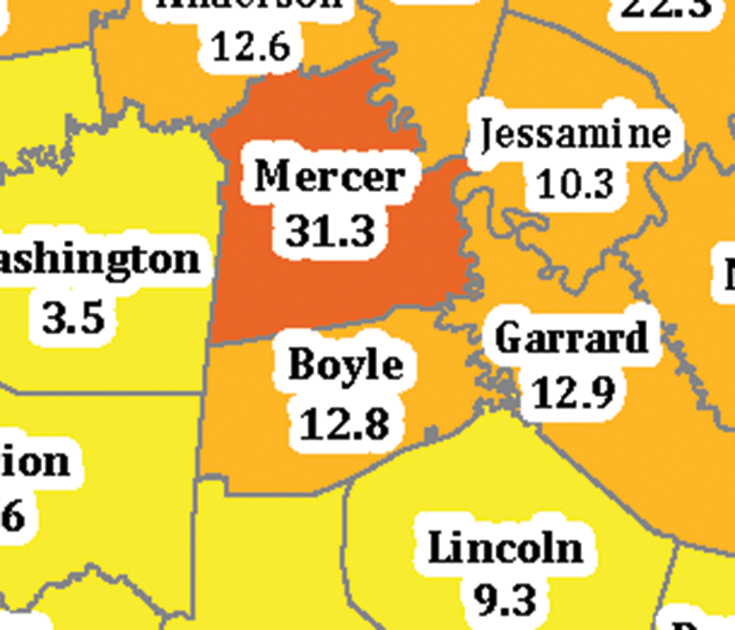 Mercer County moved into the COVID-19 red zone this weekend, forcing local schools to cancel all sports except golf and to postpone the opening of in-person instruction. The escalation in cases comes at the start of the flu season, which has state and local health officials worried.

Catharine Akins, interim director of the Mercer County Health Department, said Mercer is currently averaging about six positive cases per day. The seven day incidence rate, which the state uses to determine a county’s status, is calculated by taking the number of cases reported in each county over the past seven days and dividing it by the county population, then multiplying by 100,000. Mercer County’s incidence rate on Tuesday was 31.1 cases per 100,000 people.

Mercer has been listed as red on the state COVID-19 map since Saturday, when the county first exceeded a rate of 25 cases per 100,000 people. Mercer remained red Sunday and both Mercer County and Burgin Independent Schools—which were supposed to begin in-person instruction Monday—postponed re-opening until Monday, Oct. 5.

“We will convene Friday to review what has happened with the COVID numbers this week, but right now it’s our intention to start back on Monday,” said Donald Wayne Smith, the athletic director for Mercer County Schools.

As for sports, Smith said the Kentucky High School Athletic Association gave individual schools the power to make decisions on whether to hold sporting events.

“When athletics will start is really an open ended questions with a lot of different factors,” he said. Officials will look at whether the spike in infections are within the school or the community.

“There are a lot of variables to consider,” Smith said. “The hardest part is taking all the information to come up with an educated decision and have the backlash from people with limited information that isn’t always factual. We try to be a thorough as possible and I believe if what your deciding is done for the right reasons, the answer will be right.”

In a Facebook post, Burgin Principal Chris LeMonds said he was  disappointed but that schools hold a responsibility  to protect students and staff.

“When both the state and the local health department ‘strongly recommend’ that you do not have in-person school, then you basically have to go with what they say,” LeMonds said. “The risks associated with returning to school while going against the advice of state and local health officials would put our district at risk.”

It’s not just Mercer County that’s in the red zone. Kentucky, which recorded its largest tally of new cases last week was placed in the red by the White House Coronavirus Task Force Reports for Sept. 27. The White House noted Kentucky is in the red zone for cases, indicating 101 or more new cases per 100,000 population, with the 21st highest rate in the country. Kentucky is in the yellow zone for test positivity, indicating a rate between 5 and 7.9-percent, with the 15th highest rate in the country. In addition, to the increase in new cases, the positivity rate—the number of those tested who test positive for the coronavirus which causes COVID-19—has also gone up, although it has not passed five percent so far.

Across the nation, the number of new daily coronavirus infections  continued to rise this past week. According to the Johns Hopkins University Coronavirus Tracker, the U.S. reported more than 55,000 new cases on Friday.

The increase in COVID-19 cases is worrying because it coincides with the beginning of the flu season.  Health officials are asking people to get the flu shot. Dr. Steven Stack, commissioner of the Kentucky Department for Public Health, said the federal government has ordered 200 million doses of influenza vaccine this year.

“It’s going to reduce the burden of flu,” Stack said. Noting that wearing masks could also help prevent the spread of the flu, he said officials are hoping to be able to slow down the spread of flu this year. During the 2018-2019 flu season, 34,157 died of the flu.

“This is within our ability to affect,” Stack said during Tuesday’s briefing.

On Tuesday, the health department reported three new cases, raising Mercer to 72 active cases, with 216 people in quarantine. There are currently eight people in the hospital, while 10 have died. So far, there have been 280 confirmed cases, with 198 people listed as having  recovered.

On Tuesday, Gov. Andy Beshear announced 1,018 new cases, the second highest total since the pandemic began. So far, there have been 67,856 confirmed cases with 11,792 listed as having recovered.

The governor said the state is beginning another escalation. He said the fall has the potential to be the most dangerous time seen in Kentucky.

“We can’t let this thing get out of control again,” said Beshear, who implored the public to keep wearing masks and social distancing.

Across the world, there have been over 33.7 million confirmed cases, according to Worldometers.info, with 210,525 new cases reported by press time Tuesday. So far, 25 million people are listed as having recovered while over a million have died.