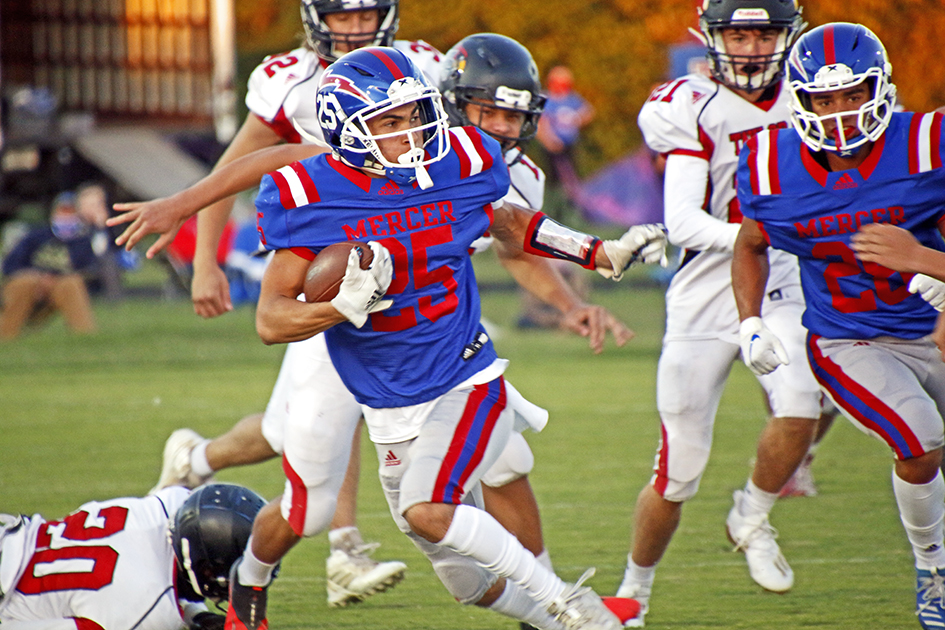 The Mercer County High School Titan’s football program (1-1) failed to disappoint this past Friday, Sept. 18, when they outlasted the Cardinals of Taylor County (1-1) 20-14 in a thrilling victory at Alvis Johnson Field.

Jalen Lukitsch took the opening kickoff 40 yards to give the Titans the early momentum, which they would not lose until late in the first half. It only took two minutes for the home team to get on the scoreboard, and Brayden Dunn capped off the drive with a barreling touchdown run from seven yards out.

The Titan running game excelled against the Cardinals defense. It carried Mercer County’s offense with 184 yards on 32 carries. Juniors Jackson Peavler and Dunn combined for 180 yards and two touchdowns, and Dunn praised the offensive line’s efforts at winning the line of scrimmage.

“The line stepped up big tonight. They’ve been working hard all week, and they gave a great effort tonight,” said Dunn.

The Titan offensive line, led by seniors Jesus Garcia, Richie Macias, James Mathe and Blake Brown, opened up gaping holes in the Cardinals defense. But Head Coach David Buchanan said they still need to improve ahead of next week’s match up with the Christian Academy of Louisville, specifically in pass protection.

“I thought they did a nice job. I thought they blocked pretty well. Pass protection, we’ve obviously got some work to do on that, but early on, run blocking, we did some good things,” he said.

Buchanan is known for trick plays which often end in Titan touchdowns. This night was no different, as junior Cayden Devine took the reverse from Dunn and tossed it to wide open receiver Riley Peavler, who completed the 63 yard touchdown completely untouched, making the score 14-0.

Senior outside linebacker Bryce Walton sacked Cardinal quarterback Ethan Coghill, forcing the punt with just under seven minutes left in the first half. Less than 60 seconds later, Jackson Peavler took the handoff and ran 62 yards straight through the middle of the Cardinal defense for a third Titan touchdown.

Taylor County struck fast. With 4:04 left in the first half, Coghill found Connor Roney down the sideline for a 47 yard touchdown pass. 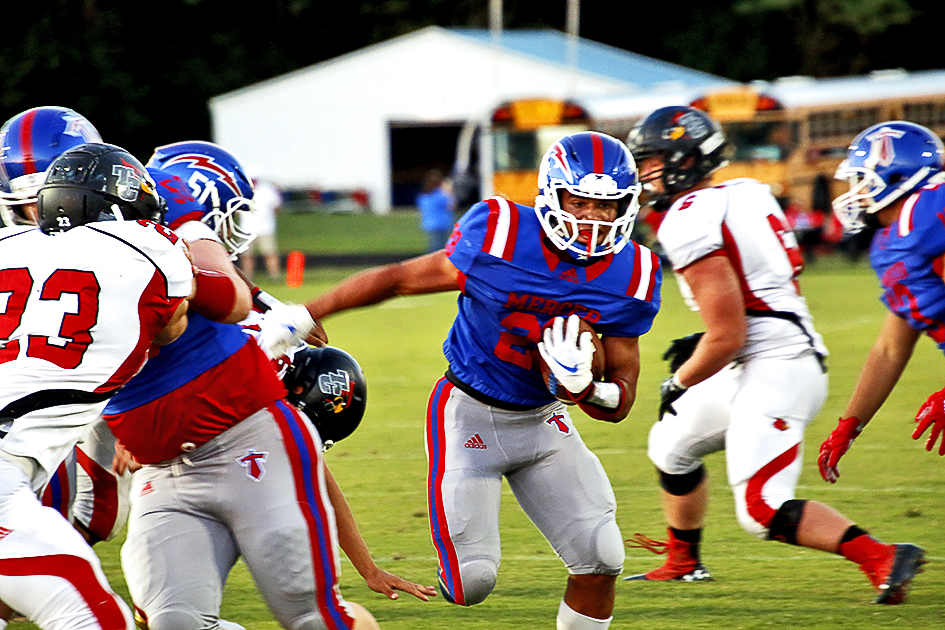 The Titans lead 20-8 heading into the locker room after two quarters.

The game rekindled a recently developed—and short-lived—rivalry between the two teams, who  had been in the same district since 2011. While they are both now in class 3A, they no longer compete for a district championship. The last time the Titans played the Cardinals was for the district championship in 2018. Taylor County edged Mercer  26-21. A year prior, Buchanan coached what he believes to be one of the worst losses he can remember as coach of the Titans.

“It’s interesting you brought that up. One of the ugliest games we have had here was in 2017, it was as ugly as it could be,” the coach said. “Now they’re a final four team from last year and this was a really good win for us, really good.”

The Cardinals controlled momentum in the second half, and only four minutes passed before senior running back Wes Oliver ran 15 yards for a Taylor County touchdown. The two-point conversion failed, and the score was 20-14 with 7:57 left to go in the third quarter.

Both teams failed to score for the remaining 20 minutes, but the Cardinals always seemed to be threatening to take the lead. They made their way inside the Titans 25-yard line five times in the second half, but only scored the one touchdown. Four separate times the Titan defense stopped the Cardinals from scoring in the red zone, and the front seven refused to let Oliver take control of the ball game for the Cardinals.

It was the Titans’ ability to hold the Cardinals’ best player to just four yards a carry that sealed the deal late in the game. Oliver tallied 140 total yards, but it took him 35 carries and a catch to achieve them.

The Titans didn’t win because of their dominating play, and they didn’t overwhelm the Cardinals with talent. Their refusal to lose shone bright and Buchanan praised their ability to find a way to win.