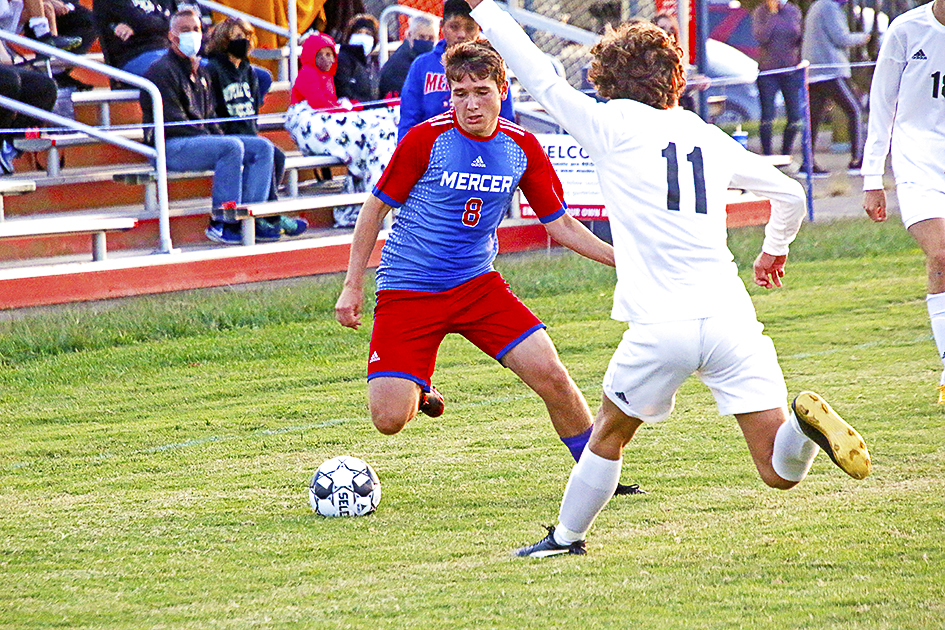 The Harrodsburg Herald/Sam Warren
Senior Jamie Bordeaux had a big game during the Titan’s win over the Rebels Saturday, Sept. 19.

The Titans got on the board quickly and after a fast build up through the middle of the field, the ball landed at the feet of senior midfielder Sammy Berger, who played striker Forte Bess for the quick conversion (5’).

Senior Caden Ferrell scored the Rebel’s first goal of the night (16’), but seconds after the kickoff, Jamie Bordeaux worked the ball into the box and attempted a cross that deflected off of Rebel goalkeeper Jack Little and slowly rolled over the line (16’).

Rebel sophomore Andrew Leines made consecutive fouls on Bordeaux in the area, which led to a Titan penalty kick. Bess stepped up to take the kick and finished with composure (28’).

Bess’ hat trick was plenty enough to temporarily replace the efforts of Senior striker Jeron Winchester, and Head Coach Garret Stark believes it may be because of his devotion to soccer over football.

“I mean, we’ve expected a lot from him this year,” Stark said. “His focus has been on soccer, where he’s been a dual sport athlete, last year as a freshman. He made the decision to stick with soccer this year and we’re expecting him to be ready to play in the varsity games and contribute by scoring goals, which he did tonight.”

Winchester’s absence from the lineup resulted in major changes to the positioning of the Titans starting 11. Stark says only two players started in their original position, but it was sophomore Beau Brown who stood out amongst the changes. Brown’s versatility was a key factor in his move up to midfield from the backline, and Stark was pleased with his performance.

“I mean, he’s fast, he’s physical, he made good touches, was able to connect passes.  He definitely gave us a little spark there tonight,” said Stark, who said he is comfortable with playing Brown in the defensive midfielder role in future games.

Bess managed to walk his third goal into the net, completing his hat trick, following multiple miscues in the Rebel defense (48’). Sophomore forward Tristan Compton netted a consolation goal for the Rebels in the 69th minute.

Bordeaux shined brightly for the Titans and his ability to carry the ball up the pitch was a game changer. The final Titan goal came from a Bordeaux connection with midfielder Gavin Wilson. Bordeaux worked the ball up near the Rebel goal before tapping it to a wide-open Wilson, who finished with ease.

“Yeah, I think the biggest thing is we just have to take our opportunities. We practice enough during our practices and things like that.  It’s just being calm in front of the net and being able to pick out the corner of the net when we do,” said Carlson.

The Titans took a step forward after the season’s initial kick-off, in which they lost 5-2 to Somerset.