The Lady Titans honored seniors Kendall Edelen and Kiera Marcum before their game on Thursday, Sept. 17.

“Kendall Edelen and Kiera Marcum have an important role on the volleyball team as seniors,” said Head Coach Lynn Flach. “Both girls are tremendous leaders.  They are positive to their teammates, they do a good job of picking up players when they are down, and they are very good at teaching the younger girls the expectations of the high school program. They do a good job of keeping the team in control while playing and try their best to not let the team get caught up in the negative mental part.” 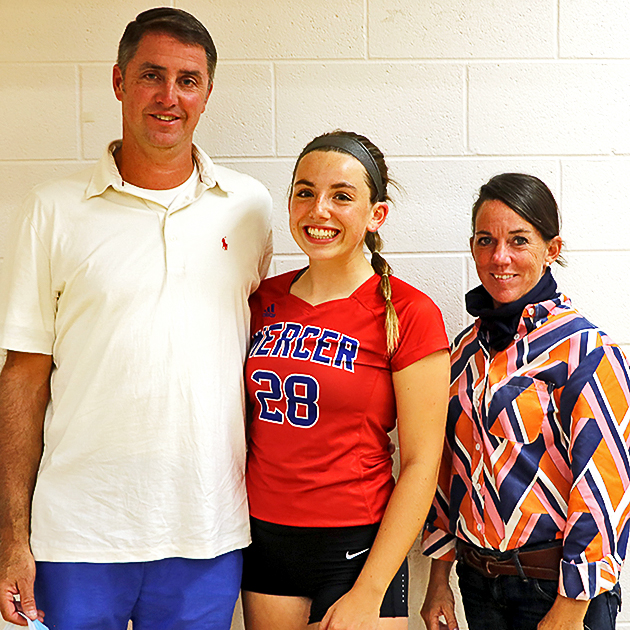 The Harrodsburg Herald/April Ellis
Mercer County Senior Kendall Edelen, center, was recognized prior to the Lady Titans match against Western Hills Thursday, Sept. 17. Pictured with Edelen are her parents Chad and Jennifer.

Western Hills senior Nicole Shouse stepped to the service line to start the game and earned five points before serving into the net.

Mercer struggled with wild passes and Jai Piazza had good swings but the ball kept sticking in the net.

Piazza, a sophomore, redeemed herself just a few plays later, nailing a hard hit just inside the Lady Wolverine’s back line. Recent graduate Jaclyn Devine left a hole for a big hitter that Piazza has the potential to fill.

“Jai Piazza and Jamesyn White are both sophomores who do a great job hitting in the front row. However, it never tends to be on the same night. Against Western Hills Jai was on, against Casey County Jamesyn was on,” Flach said. “I look forward to the day they are both on at the same time. I will not compare either one of them to Jaclyn Devine because they are a different type of player.”

The coach pointed to the differences between the players.

“You have to keep in mind when Jac was a sophomore, she was not near the player she was as a senior,” Flach said. “Jac’s sophomore and junior year we had a lot of losses that were close games and could have gone either way.  I do see the same thing happening again, we have had several losses that could have gone either way.  What I hope to see is that Jai and Jamesyn continue to improve as Jac did every year and by their senior year I hope to have another dominate team.” 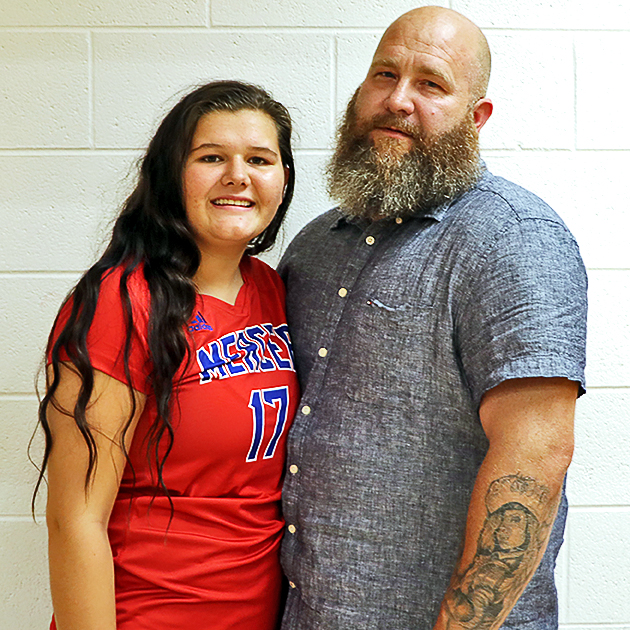 Marcum made her presence known with a big block at the net bringing Mercer within two, 8-10.

Western Hills called a timeout and it was a good strategy. The Lady Wolvernines jumped out 14-8 with junior Allie Dick at the net getting great sets and making hard hits Mercer couldn’t handle.

The Lady Titans caught a break when Dick hit it into the net, but couldn’t get their momentum going and lost the first set, 25-11.

In the second set, Western Hills jumped out 8-0 before Head Coach Lynn Flach called a timeout to settle her team.

Mercer looked to change their luck when Rylee Freeman was able to dig a hard hit from Dick and get Mercer on the board 10-1.

The Lady Titans started to inch their way back. Edelen placed a perfect set for Piazza, followed by a hard hit from White, who got through Western Hills’ blockers. Mercer got within four points, 12-8, when the Wolverines went on a scoring run, 17-9, until Coach Flach called a timeout.

Western Hills jumped out 22-11 and Haven Six stopped their momentum with a perfectly placed dink on the net, but it wasn’t enough and the Lady Titans dropped the second set, 25-12.

Six meant business opening the third set. She set Piazza for the sneak attack dropped over the net and joined Elle Prewitt for a block and dig out of the net to bring Mercer up 1-2.

Junior Anna Shaffer went to the service line for the Lady Wolverines and helped her team regain the lead, but the Lady Titans weren’t giving up.

Marcum, Six and Prewitt worked the net well together and kept the score within one to two points and at one point took the lead, 11-10. Freeman kept the ball alive with passes on the back row and Piazza showed her hustle, crashing into the bleachers.

Six had a couple perfect quick sets to Piazza that Western Hills was unable to return.

Shouse stepped back to serve and slowed Mercer’s surge. Shouse brought the score to 23-17.

Six tightened the score from the service line 21-23, but Mercer just couldn’t hold on and the Lady Wolverines swept the match, 21-25.

“We are having a lot of struggles with inconsistency this year,” said Flach. “ A lot of that comes from having such a young team.  The more they play, the more experience they get, will hopefully lead to them learning how to win games.  We go on runs where we play really well, so I know they have the ability, then we go on runs where we can’t do anything right. At this point, to become more consistent, we have to reduce our number of passing and hitting errors.  We need to mature as a team and understand that if anyone on the team makes an error, we have to correct it the very next play and make it error free. Instead we tend to let an error spiral into several errors, and it is hard to win a game once that spiral starts.”

The Lady Titans’ next game is Thursday, Sept. 24,  against their district rivals at East Jessamine.