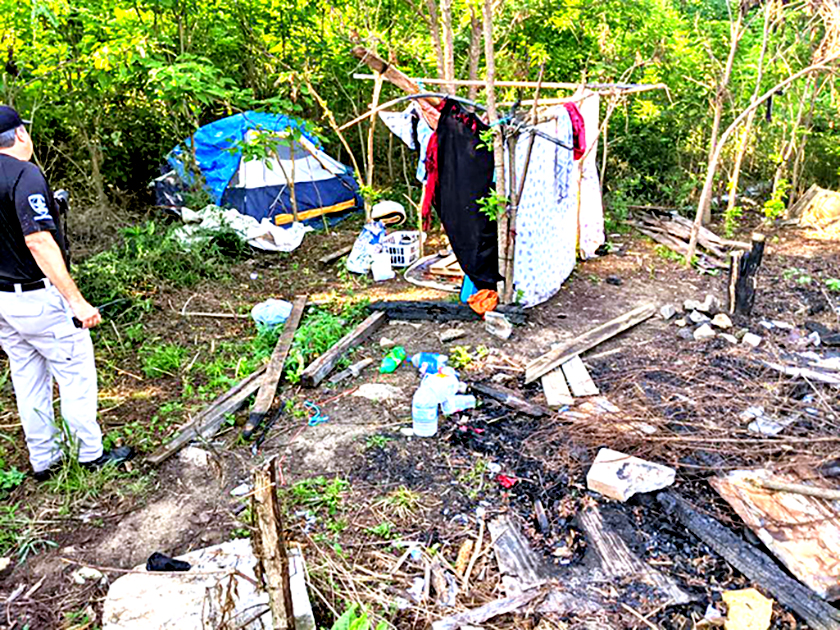 Image: Albert Moore
A living space for someone behind Lemons Mill Brewery according to Albert Moore, superintendent of parks and streets for the City of Harrodsburg.

The Harrodsburg Homeless Taskforce has called a community forum to discuss the issues facing the city on Thursday, Sept. 24, from 6-7:30 p.m. in the Lions Club Community Center during a meeting last week.

“The taskforce has no expectation of solving the problems on its own,” said Jack Coleman, chair. “We have identified the situation, gathered perspectives, engaged the people, established communication between groups and offered consistent opportunities to mitigate homelessness.

Coleman said the hearing is to discuss options for the city and make the issues public.

“The problem has been here for years,” said Coleman. “It will continue to be here.”

Coleman said it is important to distinguish between those on the street who want help and those who have chosen it as a life style.

“There are those who need help, they want help and we can offer it to them with programs,” said Coleman. “There are also those who have no desire for help and are happy with the street lifestyle.”

According to Scotty Hammons, the latter is the issue.

“We need to separate the riffraff from those who are just down on their luck,” said Hammons. “We want to help those who need it, but we can’t help someone who won’t even talk to us.”

The problems at Old Fort Harrod State Park have been solved with help from park rangers but the people sleeping there didn’t leave Harrodsburg, Hammons said.

“We are cleaning up everyday,” said Albert Moore, superintendent of the Harrodsburg road department. “Feces, clothes and trash everyday.”

Moore said the recent vandalism of Old Towne Park prompted an extensive clean up and the perpetrator to be arrested.

“We had him arrested but he beat the cops who took him to jail back to Harrodsburg,” said Moore. “They kept him 30 minutes because of COVID.”

Mercer County Jailer Bret Chamberlain said that without a violent crime the jail would not keep them.

“They get issued a summons and released because of COVID,” Chamberlain said.

Logan Steele, assistant Chief for the Harrodsburg Fire Department, said the homeless are keeping them busy with calls.

“Between the hours of 11 p.m. and 5 a.m. they are out walking the streets,” said Steele. “We have a lot of drug calls related to the homeless.”

Discussion of property destruction, break ins, feces on the streets along with community and business owners being scared to walk outside were all addressed during the meeting.

“We have a bad reputation as a city with all this,” said City Commissioner Charlie Mattingly. “I have had enough.”

Proposed solutions ranged from busing them out of town, building more low income housing to building a shelter.

Trevor Short, executive director of the Christian Life Center, said he is helping those he can but disagreed with the idea of bussing them out of town.

“Even if we shipped them out of town they would come back,” said Short. “The problem would still be here and we need a transitional solution.”

Some participants commented on the availability of food as a draw for vagrants to stay.

“We can feed them and they might stay but if we don’t feed them they will die,” said Mike Riley, program development manager for the Bluegrass Area Development District, who serves as board support for the Bluegrass Workforce Innovation Board. “I agree we need a transitional solution. But we don’t need to reinvent the wheel. We should bring in someone who has experience to talk to us about solutions.”

Riley said Community Action has the means and programs in place to help with jobs, work boots, clothing and more.

“We have more jobs available than we have people willing to work,” said Riley. “We might be able to help one and that doesn’t seem like a lot but that is one less we need to help next week.”

A call for a community meeting to discuss the issues and possible solutions came from Coleman as the hour-long meeting was forced to end.

“We are having good discussions. We will set a community hearing and bring this to the public,” said Coleman.

The community hearing is scheduled for Thursday, Sept. 24, from 6-7:30 p.m. at the Lions Club Community Center.