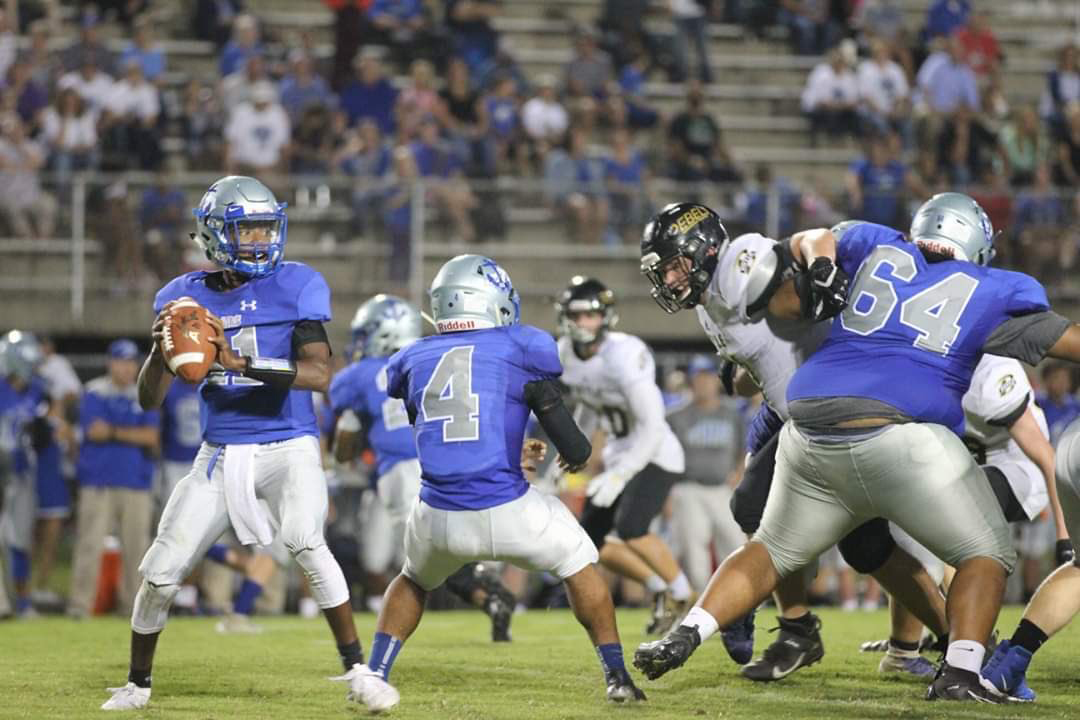 The Danville Admirals football program has had great success under Head Coach Clay Clevenger. Clevenger, in his eighth season now with the Admirals, has led the team to two state title games and one championship in 2017.

Since 2017, the Admirals have struggled. Their record last season was  3-7. It’s certainly not what the Admiral community is used to, but at the same time, it all has its own philosophy.

Coach Clevenger said they have filled their schedule with tough teams, to better prepare themselves further into their careers.

The Admirals have had some very talented seniors over the past two years. Darrian Bell, a 2019 graduate is now a Division-1 player at the University of Louisville. But outside of their seniors they have been particularly young teams.

In 2019, at one of, if not the most important position–quarterback, they started most of their games with freshman standout Sage Dawson. He performed well despite his lack of experience at the high school level. Playing in tough games like the Ads have been has a done lot to help his potential.

Experienced or not, Clevenger is ready for this team to put the pieces together and really start to hit their stride.

“We have played a tremendously tough schedule these last few years, we haven’t been able to gain confidence during a season to make a solid run. To get back in the championship hunt, we have to be a lot better,” he said.

Clevenger sees the potential of this team.  He expects them to show off that potential once they gain the needed confidence. He knows this is no simple task with a young roster, but one that must be done to make progress.

“We have some experience coming back. We need to be able to get some confidence and play with an edge. We have some potential, we just need to work hard each day to reach that potential,” said Clevenger.

The Admirals roster will feature several names that got heavy minutes last season.

On offense, they return their leading passer, top three running backs and their leading receiver. The more impressive part is nearly all of them will only be juniors for this season.

Burns finished last season with a total of 1156 rushing yards on just 160 attempts, averaging 7.225 yards per carry and an average of 128.4 yards per game. He also scored 15 touchdowns on the year, averaging 1.7 touchdowns per game.

The receiving core will return Crawford, but is also losing their second leading receiver in Bell. Bell was a difference maker as a solid outside blocker, but had tremendous athleticism helping him to accumulate 259 receiving yards and three touchdowns. It is now up to the younger core to help develop the passing game, they have the chance to grow alongside their quarterback, Dawson.

Their offensive line only had two 2019 graduates,  Hezakaya Thornton and Braeden Turner. They will now have a solid, young front line who hope to have the same success in the running game as they did last season. The young line will also have six seniors to help lead them throughout the year, Hagen Burns, Christian Evans, Alex Gutierrez-Jacobs, Ethan Scott, Colby Stevenson and Catavyon Whitehead-Webb.

The kicking situation is one the Admirals know they have locked in for a while. In just his freshman season, place kicker Sam Walls, started every game, making 27 of his 33 point after attempts, an average of 81.8%. He looks to improve on his numbers, knowing his potential and success is all within his own hands.

The Admirals have an abundance of young offensive talent, but it translates to the other side of the ball as well.

While it is undeniable that 2019 seniors, Bell and Seth Gosser, were a force to be reckoned with on defense, there were still others who flashed potential when given their opportunity.

Senior Dontious Slaughter had a great season in 2019, finishing third on the team in total tackles and led the team in forced fumbles with two. He paired well next to teammate and now sophomore Xzavion Grey. Grey made his presence known as a freshman and with growth both with the experience with the high school game and physically, is prepared to make a large leap in defensive production

In the secondary, the Admirals will feature seniors Crawford, Dante Hayden, Brady Johnson, Bryce Johnson, Omareon Johnson and Blake Jones. Along with those seniors is junior Keelan Story. Story was second on the team in solo tackles and led the team in fumble recoveries with two. He also had one interception on the year.

The Admirals are shaping up to have a lot more experience on both sides of the ball and one of the more experienced teams that Clevenger has had in awhile. With young standouts and solid senior leaders, Clevenger is excited about his team.

“We have a great group of kids on the whole roster and especially our seniors. They have really worked hard this summer and fall and they did not let all the Covid stuff distract them, which in my opinion says a lot,” said Clevenger.

Clevenger praised his players in their maturity, “Our kids have been resilient throughout all this Covid stuff. They have handled it better than a lot of adults have for sure.”

The differences throughout this offseason due to COVID-19 regulations have taken their toll on many teams, but the Admirals have worked their hardest, all in hopes their season takes place.

If all goes as planned, the Admirals will begin their season on Friday, Sept. 11 in a home game against the Hazard Bulldogs, who they lost a heartbreaker to, 30-29, just a season ago.

But the game isn’t being seen as a revenge game, but rather a beacon of hope to have a full season as everyone has been so hopeful for.

“At this point we just hope to get to that game. I know our kids will be super excited to get on the field and play. At this point I don’t think it matters who the opponent is.”