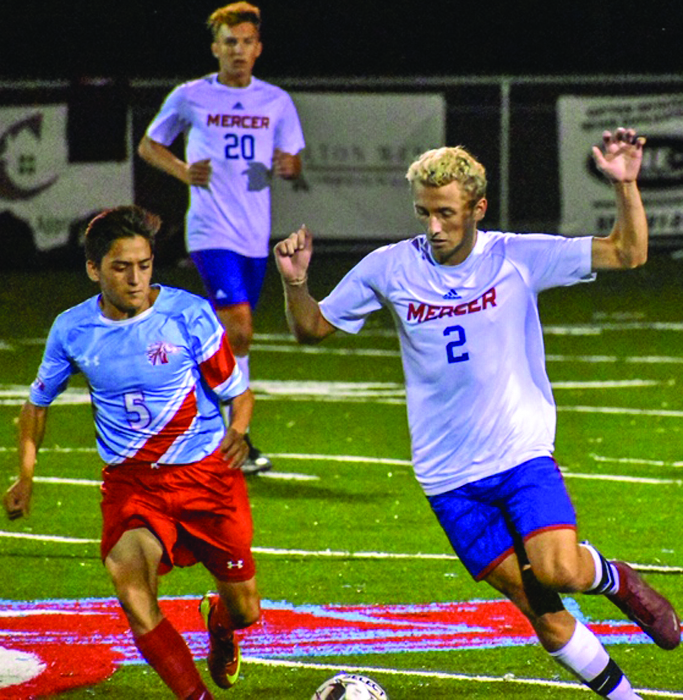 The Mercer County Titans soccer program has never experienced a losing season with Head Coach Garret Stark at the helm. Every season the Titans graduate talent all over the field. Last season 2019 graduate Hunter Booth scored or assisted on 22 of the team’s 55 goals from a midfield position, and some players will have to pick up production if the Titans want to continue their success.

Jeron Winchester is a senior striker who has scored 12 goals throughout his high school career. Stark is relying on Winchester to put the ball in the back of the net this fall, and quality service from players like Jamie Bordeaux, Forte Bess and Chase Mobley could make this Titan attack elite amongst the 12th Region.

The Titans are accustomed to being elite in the 12th Region, winning the tournament in 2012, 2015, 2016 and 2017. There is nothing Winchester wants more than to see the Titans back on top, and he says the whole team has that same goal.

“I think we all have the same goal in mind. We have had this goal ever since we were eighth graders, and that is to bring home another region championship to Mercer County. Mercer county is notorious for running the 12th region. Our senior class this year had the amazing experience of winning the 12th region when we were all freshmen, and it was the greatest feeling in the world. We plan on finishing off our careers as Titans that way as well. Not only do we want to win the region, but to make a run in the state tournament. I know we can do it, and I have complete confidence in our team to do that this coming fall,” said Winchester.

Bordeaux has progressed his goal contributions each year of his varsity career playing as a winger, but due to Booth graduating, and now playing for the Pioneers of CU Harrodsburg, Stark plans for Bordeaux to adopt a new role in the offense. Bordeaux’s ability to create chances for his teammates will come from a more central role this season, and Stark says it is strictly for goal production.

Out wide the Titans will rely on junior Chase Mobley and sophomore Forte Bess to create chances for Winchester and Bordeaux.

Bess played in 12 games last year for the Titans as a freshman, but will see significantly more minutes in 2020, filling Bordeaux’s role. Mobley will look to improve on his three assists from a season ago, replacing the production of winger Nate Randall who is also continuing his career at CU Harrodsburg.

“We’ll be relying basically on those four players for offensive production,” said Stark.

The Titans are returning all five starters in defense including captain and four-year starter James Johnston. Johnston, alongside standout sophomore Beau Brown, makes for another great center-back pairing according to Stark, who feels he has been “spoiled” with great central defenders since he began coaching at Mercer County in 2013.

“You know, I’ve been spoiled here at Mercer County, because we’ve always had great center backs come through our program in the years that I’ve been here, but they definitely stepped up to the role to keep that going. With James being a senior this year and Beau being a sophomore, he’s gonna have a little more discipline this year, so it should be great to watch them play together,” said Stark.

Johnston feels he is filling the shoes of great Titan defenders of the past that played under Stark. Players like Chase Edwards, Nick McClain, Juan Mercado, his older brother Johnny Johnston, and so many others.

“Mercer County has had great center backs in the past and Beau and I hope to live up to the rest of them,” said Johnston, who understands his role as a leader this season is crucial to the team’s success. “I feel good about that role this year. I feel like it’s time to step up and take charge this fall. Alongside the other captains Sammy (Berger) and Jeron, we will be capable of leading each part of the field,” said Johnston.

Johnston and Brown both have the ability to bring the ball up the field with solo runs, which is exactly what Stark wants them to do as it adds an extra element to the Titans forward progression.

“I like all of our defensive players to push the ball forward when they have opportunities to do that, and our players know if those backline players make runs up that we drop back to support them, so I’m hoping to see the same thing this year,” said Stark.

The defense, like many years in the past, will be a strength for the Titans this season, and not just in the center back position, but the unit as a whole. All of Mercer County’s starting defenders return from last season, including senior and three-year starting goalkeeper Aiden West, and senior fullbacks Seth Eastman, Orlando Roblero and Chris Day. Junior Jonah Lewis can also play fullback for the Titans as well, and sophomore fullback Sam Walls has transferred from Danville High School and will add depth to the Titan’s lineup in many different positions. Stark believes he can play multiple positions on the pitch and says he will definitely be competing for first team minutes.

“I think he’ll definitely be fighting for them.  Right now, it’s too early to tell just because you know he’s only been with us a couple of practices and we’re so deep defensively. We may even utilize him some in the midfield, or out on a wing,” said Stark.

Wingers, Mobley and Bess, and junior midfielder Taylor Booth are three names that Titan fans should get used to ahead of the coming season as they are expected to get much more game time this season than last. Sophomore Gavin Wilson is also expected to be challenging for minutes in the midfield this fall as well.

The Titans have struggled to fill their one month of regular season play with games. As of now, they are only scheduled to play eight games highlighted by a trip to West Jessamine on Sep. 22, and home appearances against Boyle County, Lexington Catholic, Anderson County and Pulaski County. The most important thing for Stark is that they are prepared for the postseason.

“Obviously, it’s gonna be a short season this year, so I don’t know how the district and region are really gonna look, but if we’re allowed to, you know, play those postseason games, obviously, our goal is to be playing strong at the end of the season and be gelling at the right time. We don’t have as long to prepare as far as the number of games, but hopefully, we’ll be ready to compete when it comes time,” said Stark.

The Titan players expect a return to 12th region glory this fall, and Johnston believes they have the talent to bring home another 12th region title.

“Alongside the other captains, Sammy and Jeron, we will be capable of leading each part of the field. We have a ton of talent this year and we’ll be ready to bring home that region trophy,” said Johnston.