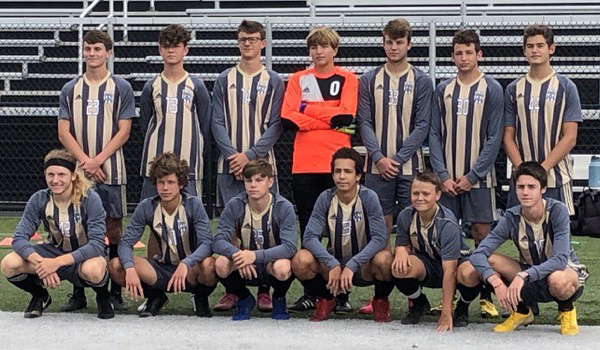 Jeremy Carlson will soon be entering into his first season in charge of the Boyle County Rebels boys soccer team and he has plans to win the 45th district. The Rebels return most of their team from a year ago after only losing three seniors this past spring.

Ethan James was a four-year starter in goal for the Rebels and is now a keeper for the Division l Raiders of Wright State. It will be hard to replace James between the posts, but sophomore Jack Little is determined to help his team in any way possible. Little did wear the gloves for Boyle County some last season, but Carlson says he has recently made a commitment to be the team’s full time keeper.

“He made a really big sacrifice for us a couple of days ago and agreed to go in goal. We’re excited to have him there. There are some intangibles that Jack brings in terms of communication and leadership that are great,” said Carlson, who plans to take advantage of Little’s experience in the outfield. Carlson wants Little to be the start of the attack, and use his good decision making and ability with the ball at his feet to be a sort of sweeper for the possession-based offense. “We’re really excited to be able to use that this year hopefully to our advantage as we progress forward,” said Carlson.

The Rebel’s offense will be possession-oriented this season according to Carlson who wants the Rebels to be patient and pick the right opportunities to move the ball forward.

“I would really like to implement a possession-oriented style of offense that switches the ball back and forth to pick out our opportunities to go forward,” said Carlson.

This philosophy would require an abundance of technical ability and talent in the midfield, which the Rebels have no shortage of. Seniors Caleb Kincaid and Caleb Sims, as well as junior Judson Perry, plan to lead the team from the center of the pitch and create chances for the Rebel forwards.

“I’m excited about this upcoming season not only because new coaches bring new opportunities, but I think this Boyle County team could do big things this year. Over the past few years of playing soccer, coaches have introduced possession and not trying to force situations that would not end out in our favor. So Coach Carlson is really trying to push us to possess the ball and to be disciplined enough to make good decisions during the games,” said Sims, who is confident in the Rebel squad ahead of this fall.

Boyle County’s midfield will be sending the ball forward to two senior goal scorers; Caden Ferrell and Gabe Hodge combined for 44 goal contributions for the Rebels in 2019 and plan to lead the team this season, not only in the attack but mentally as well.

Ferrell and Hodge have both seen varsity minutes since they were freshmen, and Carlson says their experience can carry the team through tough situations. Senior leadership is a critical piece to this season’s puzzle for the Rebels and players like Ferrell and Hodge will have a big load to carry on the road to success this season.

“They have those experiences that they can lean on when we get into tough situations or good situations. We will go as far as our senior leadership will take us and that extends past those two, it extends to Caleb Sims and Caleb Kincaid and a few of our other seniors if they are able to have a productive senior year and lead us, then I think the sky’s the limit for our team,” said Carlson.

The Rebel squad this season is a broad mix of all classes, but the seniors know what to expect this offseason, and Carlson says they are hungry to win the 45th District championship.

As for Ferrell, he recognizes that this is his last opportunity to play soccer as a Rebel, and due to COVID-19 his time may be cut short even further.

“This season really means a lot to me as high school soccer is something I love doing and is one of the best experiences of my life. I know once the season is over that I’ll look back on the memories I’ve had playing and miss it a ton so I’m gonna give it everything I got my last year playing,” said Ferrell.

Carlson is not worried about COVID 19s effect on his team’s preparation this offseason. Heading into your first season as head coach with an extremely shortened practice schedule could pose some problems, but Carlson says, because all coaches are in the same boat, it doesn’t worry him.

“It’s not going to be a smooth transition for anybody. I think we’re doing the best with what we’ve been given,” said Carlson. “They’ve done a really good job of embracing what we’ve been preaching as a coaching staff.”

Aside from teaching his new tactics on the field, Carlson is focused on helping the kids grow as people, not just players. His coaching staff is determined to guide the players along throughout the wins and losses this season, and help them grow mentally when facing the confidence of a winning streak or the disappointment of back to back defeats.

“Our coaching staff views the game of soccer as an opportunity to teach the kids about life. Sport has a tendency to be a microcosm of life, you’re gonna go through some ups and downs and we’re surely going to experience those during the season,” said Carlson.

Carlson is pleased with the spread of talent across all four classes in his team, and he is particularly excited to see the progression of this year’s sophomores. The class of 2023 makes up most of the Rebel’s defense this season; Matthew Britt, Andrew Leines, Jack Little, Ben Reynolds and Brock Keller all got significant varsity minutes last season as freshman, and are all expected to make a sizeable impact on the pitch for the Rebels in their second season as well.

“That sophomore class is really our biggest class on varsity, which for me is exciting because that means that I get three more years with them. I’m excited to watch their growth over this season, there will of course be peaks and valleys as there are with any young team, but I’m excited for them and I think they’re up for the challenge,” said Carlson.

The lone freshman on Boyle County’s roster this season is Fain Hackney, he wears the number 10 jersey for the Rebels in the midfield, and Carlson is expecting him to surprise some fans too.

“I think we’ve got a good group of senior leaders and we’ve got a really good young team who’s really hungry to do some exciting things this year,” said Carlson.

Leadership and team cohesion are pivotal for a program, especially a young squad like the Rebel’s, and Carlson is confident that this year’s team is excelling in both of those aspects.

“The team cohesion that I have been able to see so quickly has been fantastic, and that starts with our leadership from our seniors. All of them are willing to make sacrifices for the betterment of our team,” said Carlson.

Carlson admits a squad this young may struggle in certain situations to be composed and he says they will need to learn how to ride the roller coaster of ups and downs that is a high school soccer season, but if they can persevere through that, the season will be a success. His main goal for this season is to teach his student-athletes to always stay focused and competitive whether for an hour-long practice or an intense rivalry game. Those characteristics along with a considerable amount of returning talent can lead the Rebels to a district championship and beyond.

Below is a list of the Rebels roster with the exception of incoming freshman not yet added to the official roster.