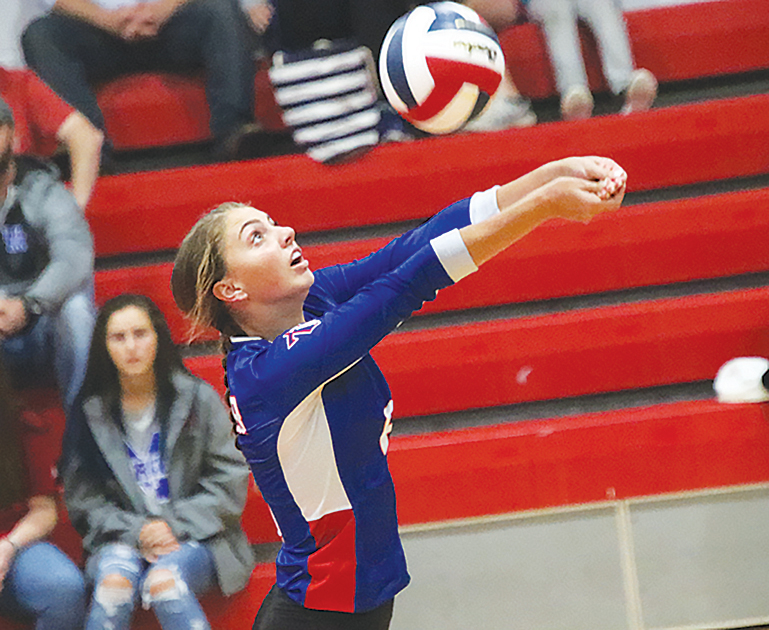 The Harrodsburg Herald/Arpan Dixit
Junior Haven Six was an offensive weapon last season for the Titans, now she plans to lead the team from her setter position.

The Titan volleyball program will need to rely heavily upon the talent of underclassmen this upcoming season. Six seniors graduated this past offseason, leaving the Titans without experienced depth, a libero or their two most efficient hitters from last season, Jaclyn Devine and Hanna Blevins.

Head Coach Lynn Flach admits that the talent of former Titans Jaclyn Devine and Hanna Blevins, as well as libero Brinkley Prewitt, is not immediately replaceable. The Titans are losing nearly 80 percent of their kills from last season and nearly 90 percent of their defensive effort. Flach will look for a mixture of new leaders and young talents to keep the team moving forward, and she believes some teams could be surprised.

“It’s really hard to replace players like Jaclyn, Brinkley and Hanna but I also think that my young girls are gonna surprise a few people. I think it may be an advantage that a lot of people are gonna come into a game expecting for us to be down, and for it to be a rebuilding year, and hopefully we will take some teams by surprise,” said Flach.

Junior Haven Six believes she will need to expect more of herself for the Titans to have success this season. Not only is she expecting herself to take on more offensive responsibility, her leadership must improve as well and chemistry with her hitters needs to improve.

“I feel as if it’s my job to expect more out of myself this season and give my 100% in practices and games. Jaclyn, Hanna, and Brinkley all brought leadership to the table in prior seasons. Now it’s time for me, as well other players to fill the leadership role. As a setter, it is very important to have a strong connection with your hitters. In the upcoming season, I have new hitters; therefore, I also have to work toward establishing that connection in order to execute each and every play,” said Six.

Six is established as the best setter for the Titans, and Flach is happy with Six’s progression, she contributed 591 assists last season with an average of 7.78 assists per set. Flach is even considering giving Six a more attacking role that allows her to hit more often.

“Haven in my opinion is one of the better setters in our region. She does a great job of running the court and keeping the team going, and she’s actually also a really good hitter. So we may try to do some things offensively where we not only have her set but we get her some hits,” said Flach.

Flach is expecting a big contribution from junior Salena Cox. The outside hitter is prepared to help the team in any way, and has impressed Flach with her work ethic and great attitude. Flach believes if Cox’s leadership and work ethic rubs off on her teammates, the Titans will be in much better shape this season.

“Salena Cox is going to be a major all around contributor to our group and that girl has a lot of hustle, a lot of heart and always gives 110 percent. I really need to see all of the other girls on the varsity level to step up and match what Salena gives, and if they do that and they all come together we should have a pretty good season,” said Flach.

Flach says the young talent is there for the Titans, but many of the players lack varsity experience and perhaps aren’t where they need to be as leaders on the court. 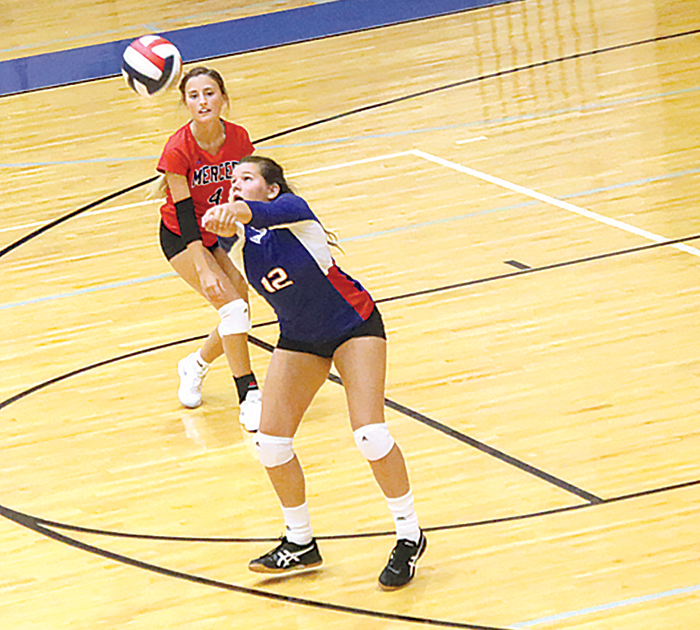 The Harrodsburg Herald/Arpan Dixit
Senior Kiera Marcum is one of two senior for the Titans this year. Flach believes Marcum will help lead the titans with her vocal leadership.

Cox is planning to influence the Titans by leading by example and help her younger teammates learn what it takes to succeed on the court.

“I plan to motivate my team on and off the court to be the best that we can be,” said Cox, who wants to motivate the team and give maximum effort to fill the shoes of the six lost seniors. “We lost a lot of great talent this past year and we have to step up and motivate our new players to compete to the best of our ability,” said Cox.

Senior Kiera Marcum will also help to lead the team, her vocal leadership and positivity helps encourage the team, and that is exactly what this year’s team needs. Flach believes that communication and experience may hinder the Titans this season, but overall the young players have just as much potential as the seniors from the 2019 season.

“Getting them to talk and play together as a group and to learn the speed of the varsity game,” said Flach.

Rylee Freeman is expected to fill the libero role left open by Prewitt. Freeman was the starting libero for the JV team last season and will be a junior this upcoming season.

Another upcoming Titan volleyball star is sophomore Jai Maria Piazza. Her extreme athleticism has led to great deals of success on the track, and now she plans to excel on the court as well. Flach looks for Piazza to continue her great hitting and even add a blocking element to her game this season, as her performance will influence the team greatly.

Flach knows her team has growing to do, but she believes this year’s lineup is completely capable of surprising other teams in the district. Despite losing so much talent she still has high expectations for the Titans.

Visit mercer.kyschools.us for the volleyball schedule.