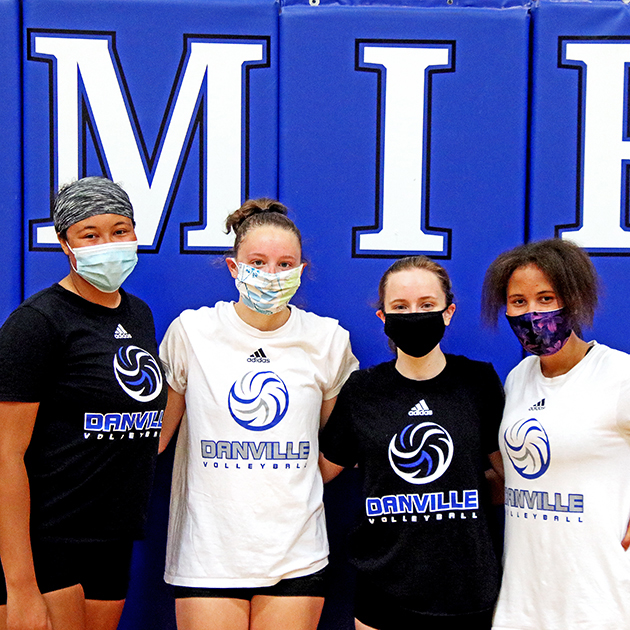 To say that Maggie Myers, head coach of the Danville Admirals volleyball team, is excited about getting the season started would be an understatement. Myers emanated confidence when talking about the upcoming season and the talent that this Admirals team has at their disposal this year.

“I do have a lot of expectations. This group, particularly this group of seniors were eighth graders when I became involved with the Danville volleyball program, and this is the first group of athletes that I feel like has gotten consistency in their teaching and coaching and training all through their volleyball careers.

This group of seniors was in the seventh grade when Danville first started their middle school volleyball program, making them the first group of athletes to play volleyball for Danville schools for six years, instead of four.

“That being said, my expectations are very high for this group. I believe that they play strong and consistent defense. I believe that they have a complex in-system offense with lots of options and we have a very strategic out of system offensive plan. All of those components together with a very aggressive serving strategy, I believe make us the top team in the district and one of the top teams in the region. Which is very exciting to say because Danville has not been in this strong of a position pre-season before this year,” said Myers.

Myers has developed a team with depth, versatility and height, and she thinks it could be the best team she has ever been a part of.

“They are so strong in all of the individual elements in addition to having some of the best team chemistry I’ve worked with. They are very supportive of one another, they are very encouraging, they give each other positive feedback constantly, and that’s one of the pillars that we’ve built this program on because if we want to be a championship program we don’t have time for drama, we don’t have time for discord,” said Myers

Myers is looking to junior Bella Joseph or senior Faith Breitenbach to fill the libero position left open by 2020 graduate Olga Bettoni, who accumulated an impressive 508 digs and 112 aces last season. Myers is confident in her team’s versatility and defensive skill and while replacing Bettoni is (no small task), she believes her team has enough talent defensively to get the job done.

Another young talent that could fill the libero role and see consistent playing time this season is sophomore Katie Jones and Myers is very impressed with her defensive progression.

“Katie is one of the few freshmen that got some consistent varsity time last year, and she (Jones) is coming along and developing some of the strongest defensive play for her age that I’ve seen in a long time,” said Myers.

Myers expects to capitalize on the height and athleticism of her group as well. The Admirals have an advantage in height in nearly every position, and Myers doesn’t believe other teams will be prepared for it.

“I think other team’s hitters are not prepared for the way we are going to make the net so much bigger,” said Myers.

Seniors Briana Johnson and Delaney Dennis will continue to be pivotal pieces in the Admiral attack this season. Myers knows she can count on the pair when she needs a big, strong swing.

“Both of them are power hitters, they are the core of our offense. Both of my setters know if they get an in-system ball their first choice is to feed Bri (Johnson). We want to feed her as many balls as possible. She is tough to dig, she will be tough for opposing teams to handle,” said Myers.

Myers wants senior pair Faith Breitenbach and Keeley McKnight to lead the team. Their composure and maturity on the court will play a big role in the Admiral’s mental state and focus on the floor this season.

“I love having them both on the floor because they are unshakeable, they play with so much positive emotion. Faith and Keeley are our foundation, they don’t get rattled,” said Myers.

McKnight will also act as an offensive weapon for the Admirals, while she is a setter, Myers believes she can be a real offensive threat.

“That is something this program has not had in my tenure, we have not had setters who were consistent offensive threats. Teams have to be ready when our setters are fed a ball, because they don’t know what’s going to happen to it and I like that, I like keeping defenses on their toes,” said Myers.

Senior team leader Breitenbach has a good understanding of what it will take to become an unstoppable force. Team chemistry and the collective pursuit of perfection is the senior-led team’s main focus this year, and how they plan to fully unlock their potential.

Expectations are high and Myers says the team’s first goal is to win the All “A” Region Championship. “Our second goal is the district,” said Myers, “but I’m already mentally preparing for competing with the top teams in the region,” said Myers.