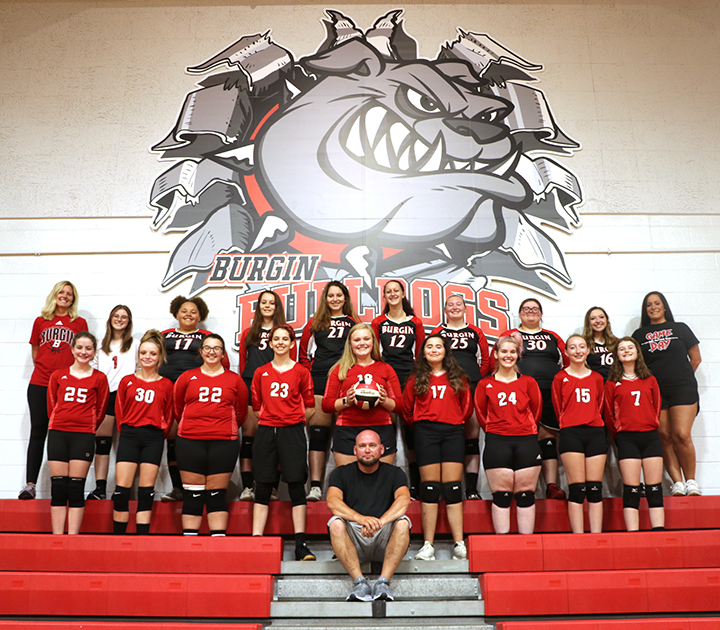 The Harrodsburg Herald/Spencer Moore
Head Coach Rick Stewart is ready to establish the foundation for the future with his largest roster yet.

Burgin only has two sports during the fall season, one being Cross Country, the other, girls volleyball.

The volleyball team is the main source of entertainment for these student athletes and fans until winter sports start. So without football, the girls and Head Coach of the bulldogs Rick Stewart, aims to please every year.

Stewart is in his third season with the Bulldogs as a head coach, and is expecting big things out of this years team. He talked about the improvement that can be made from last season to this one and the expectation he has with one of his most talented rosters yet.

“​Another year under our belt. That covers a lot of things.  Each year we get better at everything.  Coaching, skills, and even recruiting. Recruiting is our biggest thing.  Being a small school and volleyball not being known at the school as a fun or successful program it is hard to get girls excited about playing.  I was the assistant coach years ago when the volleyball program was good! I can remember when it was the female sport of choice at the school.  I want to get it back to that form.  We have had a core group come up over the last few years.  They get better every year. Hannah Stewart, Lara Burke, Heidi Foutch, Miracle Spencer, Brittany Yates, Brynn Simpson, and Kaylee McCray have stuck with it and they are the reason that the program will get better and better. We are excited about the younger ones coming up.  We were able to get a Junior High team together which helps tremendously! We also have eight freshmen that are playing on our JV team this season.  We currently have 21 girls on our team. We have never had that many.” Said Stewart

He also added what he has appreciated most since taking the job as head coach and how much it has impacted him.

“​Players look at me and all the other coaches as examples. Way more than what you realize. Everything you do, say, and how you handle yourself. Over time you can see how they will model themselves after you and other coaches. It’s funny when parents come up to you and say, ‘my kid does this just like you.’  Then you start watching and you see it.  You then understand how much more of a responsibility you have with coaching.  It is not just making them athletes.”

This year, Stewart will be working with three seniors, all three expected to make a big difference on the court. Those three being Lara Burke, Heidi Foutch and Hannah Stewart.

All three bulldog seniors were starters on the team last season, and are ready to take a big step for their final season.

“I expect to be my very best that I can be this year, especially since it’s my last. I’m very excited to be a senior leader because I can help the other girls who are newer and struggling to become the best player they can be and show them how working together and being a team really is.” said Burke

Stewart had a lot to say about this season’s senior class. He has been very close with them throughout their high school career and is excited to have them for this final season.

“​Hannah Stewart of course is my daughter.  Most of the time people would say well we would expect to hear that said type of stuff.  I want to say though I am proud of Hannah. I am hard on her on the court.  I never wanted to give anyone a chance to say that she had it easy because she was the coach’s daughter.  Anything that I threw at Hannah, any job, or task given she took hold and said let’s go. We would have talks about rotations, drills, and everything you could think of with volleyball.  In the process I saw her become better at the physical and mental side of the game. That has made her into the leader she is today.”

“Lara Burke came to us when she was a Freshman.  Lara was introduced to the team and then thrown into the varsity mix.  That is a lot to take on being a new student in a small school.  That is just the thing with Lara though.  Anytime we needed to make a change of any sort Lara always made it look easy.  Lara went from being an outside hitter, to playing all 6 rotations, to now setting the ball. With all these transitions Lara has stepped in and just handled it! She is a key reason why we were able to keep things moving and getting better.”

“Heidi Foutch came to us last year as a new student to the school.  I am very excited about the progress Heidi has made.  Heidi came into the program as a Junior with no experience in organized volleyball.  Heidi is a great example of listening to coaching instruction and following through with it. This year we have already seen growth in Heidi’s game. We are looking to have her block some balls and get some pretty solid hits from the front row.  I can go ahead and say that by the end of this season she will be even better.”

Listed below is the full roster for Burgin volleyball separated by grade:

Being a small school in a district as tough as the 46th is something that challenges Burgin every year, but with each year their pride in being the small school grows stronger. Within the past ten years, they’ve won six district games and even two district titles and want to work on adding to that list in the near future.

They have excellent leaders who have full faith in themselves and their team, as well as a young core that push themselves in every practice. It’s a solid making for a solid future.

It has been unorthodox for all teams practicing during this pandemic, but Bulldogs coach Rick Stewart has taken on the task head first and made the best of a tough situation.

“​It was hard.  Trying to keep 20 girls excited about running and conditioning for practices.  We got through it though.” Stewart said when asked about how difficult this  offseason has been due to the restrictions of the pandemic.

If the Kentucky High School Athletic Associations plans stay put, the Bulldogs will have a week one matchup against the Danville Admirals. That game will take place on September 7th at 7:00 pm and will be an away game for the Bulldogs. The Bulldogs vs Admirals volleyball games have been highly competitive in recent history. Since Admirals coach Maggie Myers moved on from Burgin in 2014, the difference has been nearly even. Burgin taking home six wins and Danville with nine. Stewart has not yet won a game as head coach against Danville but hopes that he can start off the year with a big win against the Admirals in the first week of the season.