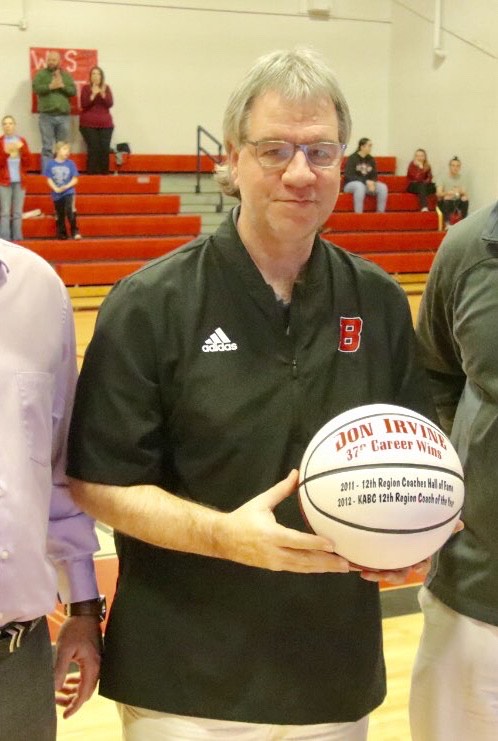 Photo Submitted
Irvine will have quick work to do with his new team for the upcoming season.

Basketball coach Don Irvine has been an interesting one to say the least. But one thing’s for sure, as long as the game of basketball is still being played, he is sure to be found on the court.

After spending a year with the Danville Admiral basketball program as an assistant, Coach Irvine has now signed to be a head coach once again for the Casey County Rebels.

“I am both honored and excited to be named the new head coach at Casey. I had a wonderful experience at Danville last year. I was missing the kids and competition so bad when I wasn’t coaching at a school, that I actually volunteered to help my dear friend Coach McKinney last winter. He was gracious enough to take me in and actually paid me for my services. I had been praying about the next step to take in my career and the Casey opportunity immediately presented itself. So I believe I’m at the place and at the time I’m supposed to be,” said Irvine.

Irvine announced that he was officially retiring from head coaching after the 2018-2019 basketball season where he had great success with his Burgin Bulldogs team.

It was definitely a tough pill to swallow for Burgin’s sports fans, as Irvine has entertained those on and off the court a great deal with his special stories and enthusiastic coaching methods.

It seemed unlikely that he would make a comeback, especially this soon, but he is excited to get started with this Rebels program.

The Rebels have taken a tumble since their 2015/16 season where they won the 47th district championship, and made it to the regional final.

They have gone 29-94 since that great year, and want to get back to their winning ways with Irvine now calling the plays. Irvine’s expectations for the team is simple, just get better each and every day.

“My goals are always the same: to improve every day, to attempt to win every game, and to represent the school and community with heart and pride to the best of our ability.”

No matter the success he has with the Rebels, one thing for sure is that all sports fans will be given even more stories now with yet another team.

Ever since he started a Twitter account (@IrvineDon) Irvine has entertained the community with stories from his coaching and  playing career.

Although he has way more than he could ever tell, I asked him to give me a story that has yet to be told on his account. Here’s what he said.

“Years ago the Russell County gym was undergoing construction so games were played in the Russell Springs lunchroom where tables were locked upright into the walls on the side. Our point guard brings it down on the dribble, slips on mashed potatoes left from lunch on the tiled gym floor, slides head first into one of the tables, dislodging it. It falls on his head knocking him out, and steps were called. While the player was recovering his wits, the janitor had to mop the floor, grumbling the whole time about why the cafeteria was serving mashed potatoes on game day.”

Two of Irvine’s former athletes, Wesley Tyler and Ethan Kessler, explained what makes a coach a great one. They both gave the same answer, culture.

“To be a great coach you have to create a winning culture for the team and get all the players to trust each other with what the team is trying to accomplish,” Tyler said specifically.

With so many of his athletes having this idea of a great culture being needed, it’s no surprise that Irvine has had the success that he has.

It takes a certain person to love coaching high school sports, but it’s a whole different level for Irvine. He has showed compassion and love to every student athlete, parent, and community that he has been a part of. The Casey County Rebels program will get the Irvine experience this upcoming season.