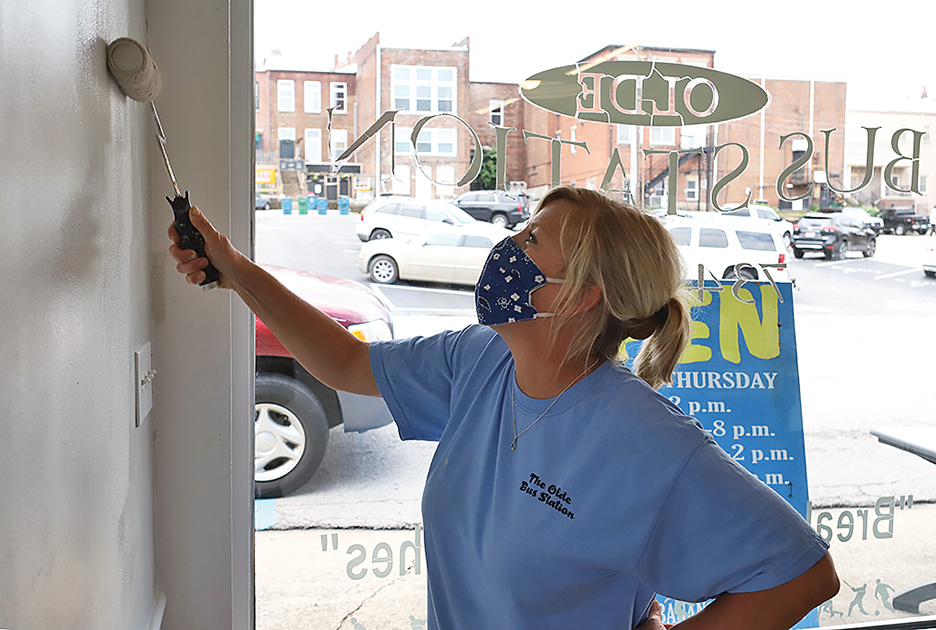 Lora White, owner of the Olde Bus Station, prepared to reopen the eatery in May. Restaurants have been asked to limit their indoor seating capacity to 25-percent. (The Harrodsburg Herald/Robert Moore).

Effective Tuesday, July 28, bars across the commonwealth are ordered to close while restaurants must limit their indoor seating capacity to 25-percent. Bars that serve food can remain open as long as their customers remain seated, while outdoor seating at restaurants can remain unlimited as long as customers can be distant. The emergency orders will last for two weeks. Gov. Beshear also said that when bars reopen, there will be stricter rules, including restrictions requiring patrons to remain seated.

The governor asked the public to support restaurants and the bars that remain open by ordering takeout.

Distilleries, which are considered venues by the state, don’t fall under the order, he said. If the numbers continue to increase, he said the state would look at further venue restrictions.

In addition, the governor recommended public and private schools to postpone in-person instruction until at least the third week of August.

Beshear said the actions are part of four measures recommended by the White House to prevent the surge in COVID-19 cases. Kentucky has already enacted the first two recommendations: a mask mandate and limiting social, noncommercial gatherings to 10 or fewer people.

He said the moves taken by state will help prevent Kentucky from joining states like California, Florida, Texas and Alabama, which have seen an explosion in COVID-19 cases, threatening to overwhelm their public health system.

“We believe it gives us a chance to get this thing under control,” Beshear said. “We do not want this to happen in this state.”

State and federal officials discussed the pandemic Sunday. According to the Lexington Herald-Leader, White House coronavirus response coordinator Dr. Deborah Birx said she was concerned with the rise in coronavirus cases in Kentucky and recommended the commonwealth shut down bars and reduce capacity in restaurants.

“We have significant concerns about the rising test positivity rate and the rising number of cases,” the Herald-Leader quoted Birx as saying. “We can see what is happening in the south moving north.”

Gov. Beshear said he knows these actions will be tough for many bars, which were allowed to reopen at reduced capacity in June. “I’m not confident every bar can survive the next two weeks,” he said.

The governor, who showed reporters a picture of a Lexington establishment where none of the patrons appeared to wear masks or stand six feet away from each other, said responsible bar owners are being punished for the actions of irresponsible ones. However, he said the long term cost of allowing COVID-19 to spread further is greater than the short term cost of trying to control it. He said not taking action could result in even longer closures.

“Most of the decisions I get to make are to avoid the worst outcome,” he said.

Beshear was asked about possible restrictions on long term care facilities, which are connected to roughly two thirds of all coronavirus-related deaths. He said federal research shows infections start at bars and speads to parents and grandparents. The governor said his administration is providing robust testing for staff members and patients at long term care facilities. If cases continue to escalate, they may have to limit visitation again, he said.

He was also asked about the limits placed on social gatherings, but not on protests. “We control what we can control,” Beshear said. He said he had seen significant number of protestors wearing masks and social distancing.

The governor said his administration would monitor a number of factors—including new cases, hospitalizations and the available number of ICU beds and the positivity rate—to decide if further steps needed to be taken. He said state legislative leaders had been apprised of the actions before they were announced to the public. 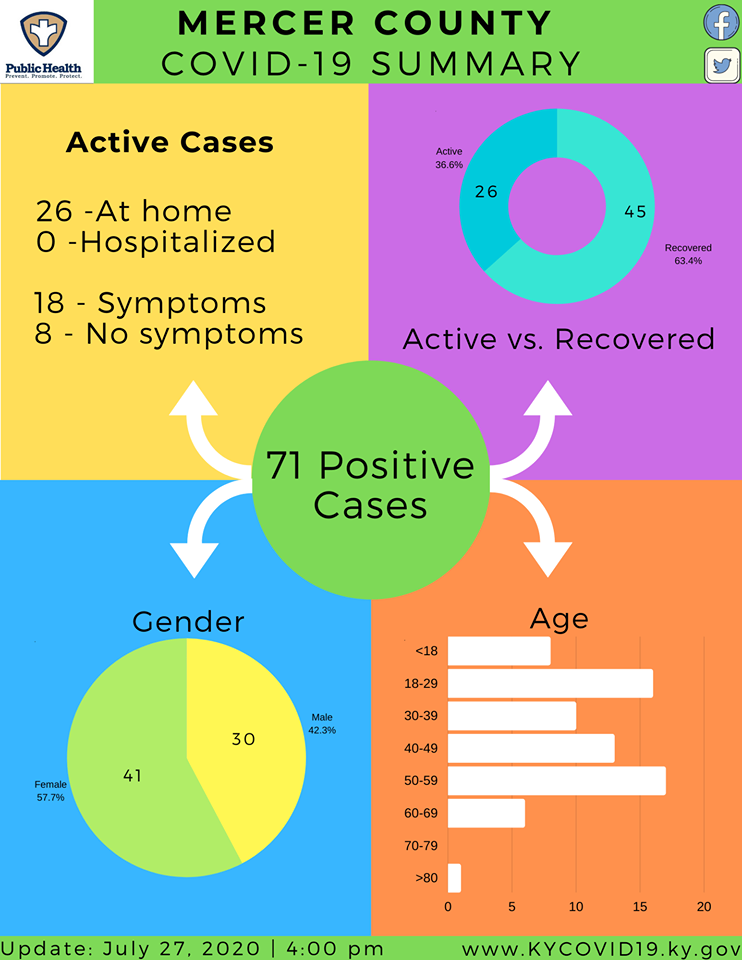 On Monday, Beshear announced 522 new cases, including 21 kids under the age of five. That raises Kentucky’s total to 27,601. The positivity rate is 5.58, based on a seven-day rolling average. So far, 7,466 have recovered while 709 have died, including nine new deaths reported Monday.

Across the world, there are over 16.6 million confirmed cases, according to worldometers.info. So far, 655,865 people have died while over 10.1 million have recovered.

Locally, there have been 71 confirmed cases, with 26 of those cases still active, according to the Mercer County Health Department. So far, no one from Mercer County has either been hospitalized or has died due to COVID-19.