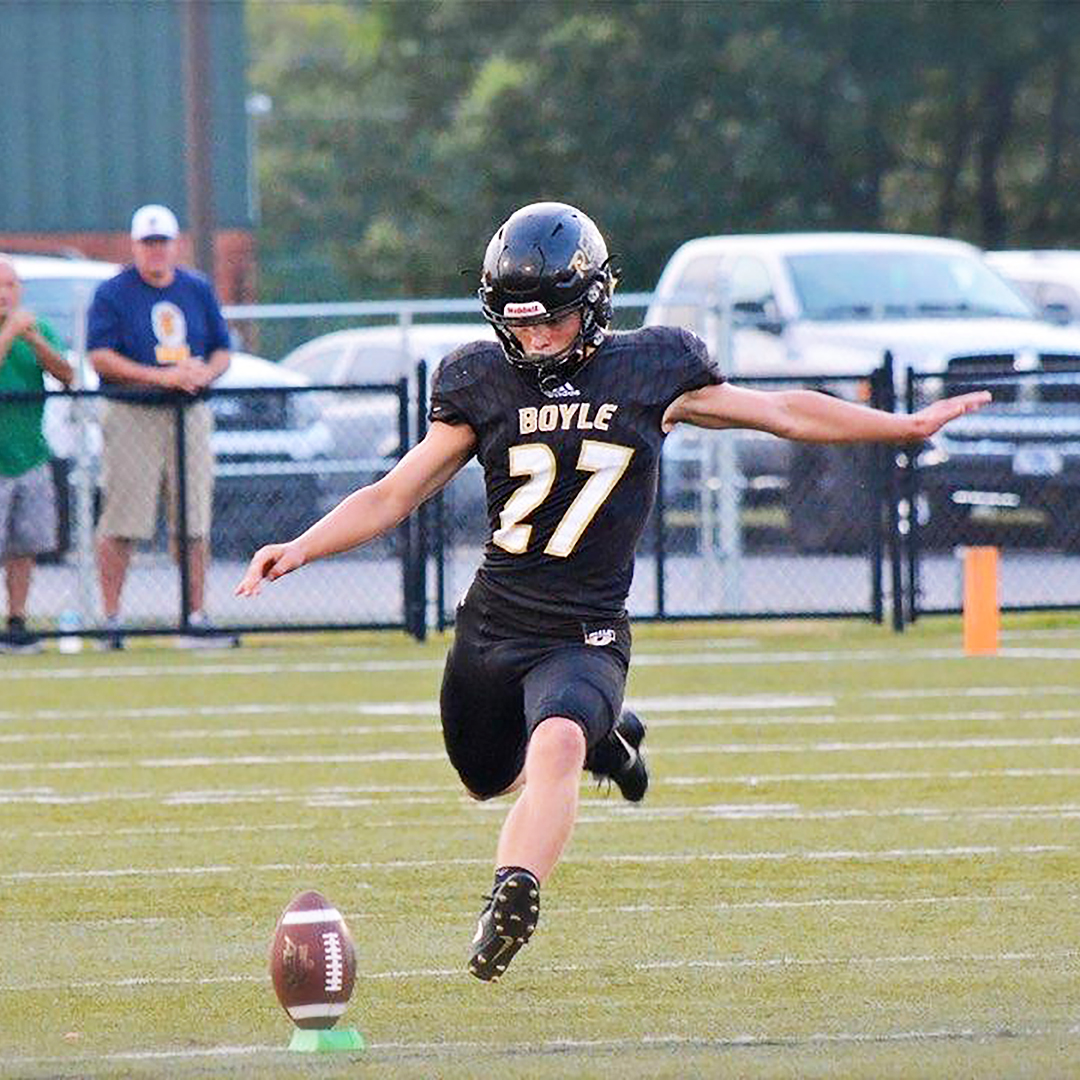 Jackson Smith is practicing his kickoffs this summer, he wants every kick to be put in the back of the endzone for a touchback. (Photo submitted).

Jackson Smith has garnered a reputation as one of the best high school kickers not only in Kentucky but in the nation. He recently received his first scholarship offer from Mark Stoops and the University of Kentucky. Smith knows he has the talent to play on the SEC Division I level, but he is still shocked that the first school to give him an offer was the Wildcats.

“I was surprised that my first offer was from an SEC school. I feel confident in saying that I know I have the talent to play at that level but in most cases, players get their first offer from a smaller school,” said Smith.

Smith is a special case, he has been exceptional across the board when punting and kicking. Last year during his sophomore season Smith was eight for eight when attempting field goals, he made 88 of his 90 PAT attempts and averaged 43.4 yards a punt. Not to mention, he is an excellent open-field tackler and will play many snaps for the Rebels this upcoming season at both outside linebacker and slot receiver. Versatility like this is rare with kickers, and Smith believes it gives him an extra edge over his opponents, and over other prospects in the recruitment process.

“If you look at college kickers and punters there aren’t a whole lot that can play other positions too. There were several times this past season where I made tackles on the kickoff team that stopped the other team from scoring,” said Smith.

Smith has been working hard this offseason to consistently put the ball in the endzone on kickoffs and get more airtime on his punts. He says his field goals have been consistent this summer, but he just needs to carry that over to this fall. He doesn’t kick too much when he practices but he improves by focusing on every kick and making sure that it counts.

“I don’t hit a lot of balls during practice. My main thing is to take every kick like it’s a game rep,” said Smith.

Smith’s training has paid off so far; his accuracy is exceptionally noteworthy for a player who is going into his junior season. Smith has traveled to many prestigious football programs across the country to attend kicking camps such as the University of Florida, the University of Alabama, Ohio State University and the University of Kentucky. He has also attended many pro-kicker camps throughout the last three years, most recently traveling to Murfreesboro, Tennessee to attend the top prospect camp, which he has attended the last three summers.

Smith is more focused on accuracy than strength. He has competed against the best kickers and punters in the country and even though he can’t kick the farthest, he still has an edge on the competition.

“I’ve kicked and punted with the best kids in my class from all over the country. I think I’m right up there with them in skill level and leg strength. I’m more of an accurate kicker than strength. There are a couple of kids in my class who I think have a stronger leg than me, but strength isn’t always the key to putting the ball through the uprights,” said Smith

Smith says he has made a 58-yard field goal this offseason and feels confident when kicking from 50 yards and in. He has high expectations for this fall, not only for himself but for the team.

“My expectations are to help the team out as much as possible whether that be flipping the field on a punt or making tackles as an outside linebacker. My expectations as a team are to win a bunch of games and have fun doing it. We might not have the depth we had this past season, but I think we’ve got a shot at winning a state title,” said Smith.

Head Coach of the Boyle County Rebel football program Justin Haddix says that Smith is a standout athlete. The average kicker doesn’t play on both sides of the ball, but then again Smith isn’t an average kicker.

“I have been impressed with his athletic ability and how hard he works in the weight room. He is an athlete for us and we will use him on both sides of the ball. (He is) not your normal kicker,” said Haddix.