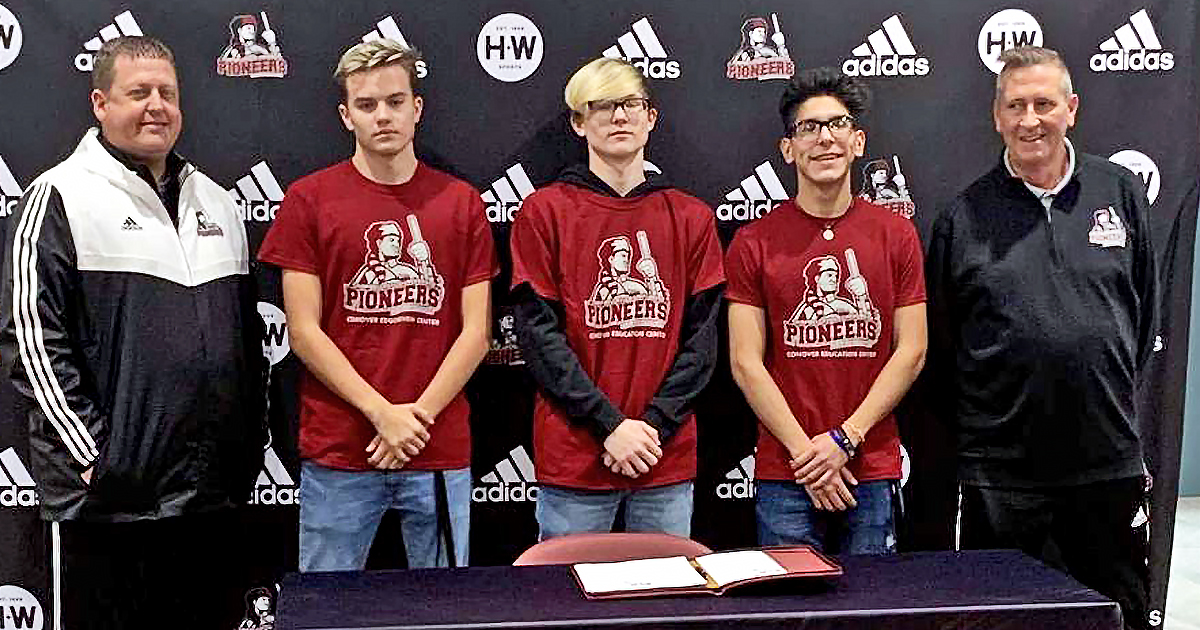 The inaugural soccer season at CU Harrodsburg is set to begin this fall. Paul Brooks, the head coach of both the men’s and women’s programs will be joined by Garret Stark, head coach of the Titan’s boys soccer program.

In the past decade, the Mercer County Titans have established a reputation for having an outstanding soccer program. The Titan boys soccer team won the region championship, earning their bid to the state championship tournament three years in a row from 2015-2017. Lately, Titan soccer teams have been built to dominate the competition, and now the Pioneers of Campbellsville University-Harrodsburg look to former Titan soccer players for help succeeding in the National Christian College Athletic Association (NCCAA).

Ballard and Jenkins are both coming from Midway University where Brooks used to be an assistant coach. Ballard has two years of varsity college soccer under his belt, which makes him one of the most experienced players on the Pioneer squad. In high school, Ballard was one of the most graceful attackers to ever play in Mercer County. During his four years as a Titan, he compiled 92 goals and 67 assists for a whopping 159 goal contributions. The Titans reached the region championship game every year-and won three of them- during Ballard’s four years of high school soccer.

Jenkins has one year of eligibility left, making him the only senior on the squad. He plans to graduate this December and remain with the team as a graduate assistant while earning his master’s degree in sports management-administration.

“I get to come back to my hometown and play a part in the first-ever collegiate season in Harrodsburg. Playing under two coaches whom I’ve played for and coached with, the opportunity to lead as the only senior during my last season, and to continue with my long term goals of coaching at the highest level immediately following my last season; I couldn’t ask for a better opportunity or exciting end to my college soccer career,” said Jenkins.

Ontiveros and Raskin are graduates of the class of 2019 and were a part of each of the region’s championship-winning Titan teams. Raskin played significant minutes all four years of high school; he made 82 appearances as a central defender in the Titan backline, scoring eight goals. Ontiveros, a midfielder, made 66 appearances in the Titan uniform while scoring eleven goals and assisting another 10. After taking a year off both players cannot wait to represent their hometown on the field again.

I am very excited to play soccer again. It was great news, but to play in my home town was a dream come true,” said Raskin.

Booth and Randall are the youngest of the former Titans. As 2020 graduates, they are the most recent players to be coached by Stark. Booth was the most impactful player for the Titans in 2020 scoring nineteen goals and assisting another three. Throughout his four years as a Titan, he played in 67 games scoring 27 times and assisting 10 times. Randall made 38 appearances scoringand assisting four times each.

Stark makes this completely new program feel like home for former Titan athletes. His winning ways, and the connection he has made with the six former Titans on CU Harrodsburg’s first-ever squad, has made a significant impact on each individual player’s commitment.

Booth says that Stark being the assistant coach was the main reason he committed to play for the Pioneers.

Randall and Ballard are very excited to play four more years under Stark as well.

“Stark being the assistant coach definitely makes me more comfortable knowing what’s to come, and the expectations going into the 2020 season. Playing for Stark for most of my high school career makes it even more exciting to continue on at the college level,” said Randall.

“I feel like it’s great that Stark is a part of the college team that’s coming into Harrodsburg. He already had a great impact as a head coach in high school, so I can’t wait to see what he’ll do with a college team. Also, I would say that him being a part of the program made it a lot easier for me to make my decision because he was a great coach and leader for me through my four years of high school soccer,” said Ballard.

More than anything, Stark is excited to coach on the next level, but getting to coach his former Titan players, while coaching on the collegiate level, is a blessing.

“I am really looking forward to having the opportunity to coach several players who I previously coached at Mercer County high school. We have Mercer County Alumni on our CU Men’s roster that graduated in each of the last four years so it is really exciting to have that local talent coming back together to play at the collegiate level. I feel very blessed to be on the CU Harrodsburg coaching staff with Coach Brooks and have the opportunity to coach these guys again,” said Stark.

Both Brooks and Stark will be leading the Pioneer Women’s program as well and the Pioneers currently hold three commitments from former Titans.

Abby Steele and Joselyn Flores were both seniors last season when the 2019 Lady Titans Soccer team made an appearance in the region championship game. Steele was a high-impact player for the Titans. In her time as a Titan, she played in 77 games while contributing six goals and six assists from a defensive position. Academically, CU Harrodsburg was the perfect fit for Steele’s ambitions later in life, which made the decision much easier for her. Her former teammate Flores being on the squad will also make the transition less stressful for Steele.

“Being on the same team with Joselyn is going to make it easier because we’ve known each other since middle school. Joselyn always cheers me up on and off the field, I’m excited to be a Pioneer with her,” said Steele.

Flores did not play soccer her freshman or sophomore year. During her two seasons on the squad, she played in nine games while scoring and assisting one goal each. She didn’t see a significant amount of minutes on the field until her senior season, so the drive to keep pushing and prove herself is always there, especially now on the next level.

“It’s a great opportunity that I get to represent my hometown, continue to play with my former teammate, and get to continue the game I love,” said Flores.

The Pioneer Women’s soccer team also received a third commitment from a former Titan, Emory Rogers. While Rogers did not play soccer in high school, she tried out for the team and impressed the coaches well enough to be included in the 16 woman squad.

The excitement around this brand new program and its first season cannot be overstated. The chance to represent Harrodsburg on the collegiate level is something these former Titans are not taking lightly.

“It’s a huge deal, especially because it is a new program with a very young team. I am very excited to represent a brand new college team in Harrodsburg,” said Randall.

Brooks says that being given the opportunity to coach this team and lead the Pioneers of Harrodsburg is “a true honor and privilege.”

“We will be young; all but two are freshmen on a squad of 30, but I am excited to embrace and mentor these young men; they constitute a third of our roster, which shows the impact a hometown team can have on a community,” said Brooks.

“I consider it a humbling experience; this has been my adopted hometown for 21 years, and I feel like I was placed here for this very reason,” said Brooks.