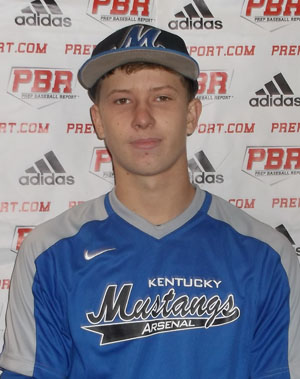 Photo Submitted
Christian Howe will be a senior this upcoming basebal season and he recently committed to play Division I baseball at the University of Kentucky.

Christian Howe has been an important part of the Danville Admiral’s success on the baseball field and has helped them become one the best teams in central Kentucky over his last three seasons. Recently he has decided to play for the University of Kentucky after he graduates in 2021.

During the three seasons prior to 2020, Howe played varsity in the eighth grade, he batted an impressive .417 while earning an on-base percentage of .500. Last season Howe had 23 runs on 118 at-bats while also adding 49 RBIs and six home runs. His 6-foot, 4-inch and 185-pound frame, along with his prodigious ability to get on base, drew the attention of Nick Mingione and the University of Kentucky baseball staff.

Howe believes the UK program will give him the tools to grow outside of baseball. The amount of care they show their players is one of the major reasons Howe committed to play at Kentucky.

“One of my favorite things about Kentucky is that they really seem to care about more than just baseball. They really take time to learn about you as a person, so I feel like it means more there. It’s sort of a place where there’s a chance to do things bigger than baseball,” said Howe.

“Aside from that, I’ve dreamed of being able to play at a very high level, and there’s absolutely nowhere better to do that.”

Howe is excited to begin his career as a Wildcat, but he knows there is still unfinished business in the 12th Region. After losing in the region championship game in 2019 and being forced to sit out last season due to Covid-19, Howe cannot wait to return to the field as an Admiral. Being committed to a NCAA Division I program while still competing in highschool gives Howe even more of a push to improve and dominate the competition next spring.

“I know it’s going to take a ton of work and learning to be able to do well at that level, so I sort of see where I’m at now as a starting point and I need to put in a lot more time and effort to get where I want to end up. I can just focus on improving myself, and I can especially focus on this next season as we’re all working harder and have a very strong team,” said Howe.

Danville baseball Head Coach Paul Morse is excited to see what the future holds for Howe in college.

“I’m really excited for Christian and the opportunity he has to play for the University of Kentucky. Christian is a hard worker and it’s great to see all that hard work paying off for him,” said Morse.

Until then, Morse’s focus is still on the Admirals’ success, and he is expecting Howe to be an important leader on next year’s team as the Admirals look to win the 12th Region Championship, and then make a run at the state title.

Howe has a great appreciation for his high school coaches and what they have done to help him achieve this goal of playing at the next level.

“All of my coaches have done everything they can to prepare me. The coaches at Danville alone have experience at basically every level of baseball, especially college. Coach Morse even played at Kentucky himself, so they know what to expect and how to get there. They’ve all pushed me and others at Danville to work harder and to be the best version of ourselves and I don’t think that will stop once I’m in college,” Howe said.