Ethan James will hang up his Boyle County Rebel uniform and pick up a new one when he becomes a Wright State Raider this fall. (Photo submitted).

James has spent the last four years building his Boyle County legacy between the goalposts, and he garnered much attention from college coaches, but Wright State stood out from the crowd and emerged as the best fit for him.

James was a goalkeeper for Kings Hammer Soccer Club in Covington, so he is familiar with the Cincinnati area, and Wright State’s campus in Dayton is a short drive from Cincinnati. James feels the university is the best fit for him not just because it is close to home, but because it feels like home.

“I’ve been playing soccer in the Cincinnati area for three years now and Dayton is only 45 minutes to an hour from there, so it felt close to home for me. The facilities are great, we have a great stadium and pitch, and the coaches made it even more of a reason to go to Wright State. I chose Wright State because of its home-like feeling,” said James. 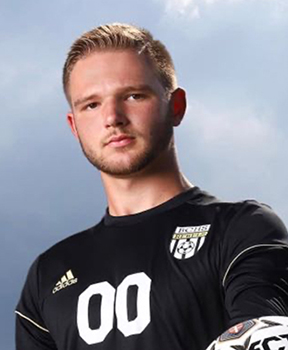 Wright State’s soccer program is on the rise and 2019 was a historic season for the Raiders. It marked the sixth straight season in which their win column has been in double figures. The squad won the first Horizon League title in school history and made the first NCAA tournament appearance in school history, in which they defeated Notre Dame in the first round before losing to Michigan in the second round three days later.

Wright State’s head coach Jake Slemker offered James a scholarship on Jan. 14 and it did not take long for him to be convinced. Within James was committed to the Raiders, which is considerably early in the club season. James also held offers from Elmira College in New York, Transylvania University and he was also in talks with the University of Kentucky, but it wasn’t the right fit.

Above all, James will always appreciate his time as a Rebel, they are four years he will never forget. The Rebel coaching staff had a strong impact on James’ development as a player, and most of all, on his work ethic.

“The biggest thing my coaches drilled into my head is work ethic, staying after practice, arriving at practice early, and just to outwork everyone and strive to be the best,” said James.

“Ethan was great to coach. He was always dedicated and hard working. I’m happy for him and proud that he accomplished his goal of playing division one soccer,” said James’ former Rebel head coach, Chris McMann.

Not being in the starting eleven is something James was not used to at Boyle County, and he views the starting goalkeeper position at Wright State to be wide open.

“As of right now the position is open so my role is to go in guns blazing and try to make it mine,” said James.

“Right now it’s all up in the air so I don’t know who is going to get it, but I plan to go in and work as hard as possible.”