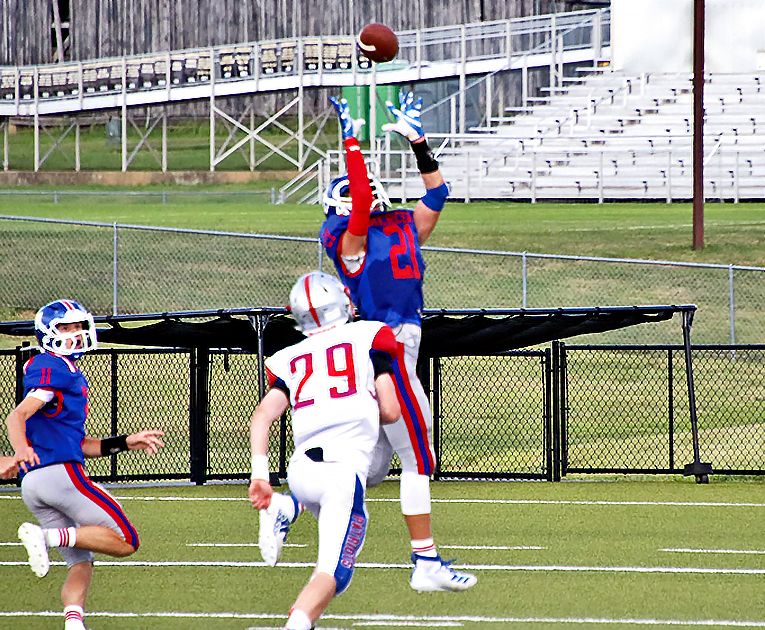 Class of 2020 Mercer County athlete Dillon Warren has committed to play football for the Georgetown Tigers. Warren played for the Titan football program all four years of his high school career and helped lead the Titans to a 8-3 record in his senior season.

Warren is an incredible athlete with quick feet and blazing speed, and now his work ethic has been noticed by Georgetown head coach Bill Cronin.

“A lot went into making my decision. Academics was a very important factor, especially with the credibility and reputation they have, but the deciding factor was the proximity to my family, and the campus felt like a home away from home,” said Warren.

Warren was an explosive wide receiver and a lockdown defensive back for the Titans and he consistently made big plays on both sides of the ball. During his senior year, Warren caught seven touchdowns, rushed for one, threw for another, and had a pick-six in the opener against West Carter.

He was a leader on the defensive side of the ball and along with his 50 tackles, he also contributed two interceptions.

Warren had the opportunity to choose between playing on offense or defense in college but ultimately he wants to benefit the team in whatever way possible.

“That was a tough question to answer because I love playing both, but I told him (Cronin) wherever they need me most and see the best fit, that’s what I’ll do with 110 percent effort,” said Warren.

Warren’s talents were not exclusive to the football field, he was also on the baseball and track and field teams.

In his junior season, Warren received all-district and all-region honors while compiling a .447 batting average and accumulating 20 RBIs. He also represented the Titans in the East-West All-Star Game. As a track athlete, Warren was a sprinter and a jumper, finishing second in the long jump at the region competition and qualifying for state his junior season. As a standout football player, celebrated baseball player and impressive track athlete, he certainly left his mark on Mercer County athletics.

Now Warren plans to leave his mark on Georgetown, a historically great, championship-winning, NAIA football program that has not had a losing season in 23 years.

“I want to make a huge impact. I want to be the best I can be and contribute to many wins and hopefully championships, but I know for that to happen I have to outwork everybody and push myself even when I want to stop,” said Warren.

To head football coach David Buchanan, Warren is exactly the kind of player you want leading your team. He possesses a willingness to learn and a great work ethic, two things that can not be coached.

“Dillon was a worker and that work translated to success on the field. He is an outstanding young man and athlete,” said Buchanan.

Warren has been a Titan athlete since he was a young kid playing little league baseball, and he attributes his success to the great learning environment his coaches have made for him at Mercer.

“There are so many things, and a lot of coaches, that have helped me get where I’m at today. All the way through little league up to high school, but I think spending the past four years with the entire high school football staff has been very beneficial to me. They obviously helped a lot with football and skill and strength, but they were all people who I could lean on if I was having difficulty with something,” said Warren.

“They would give us advice almost every day, and they showed time and time again that they loved all their players and would do anything for them. So I think being around that positive energy for the past four years really helped me get where I’m at today.”