Jennifer Marsh
Herald Staff
jmarsh@harrodsburgherald.com
Protesters took to the courthouse steps Saturday evening in Harrodsburg. Joining many others around the country.

“We just wanted everyone to know the color of your skin should not matter,” said Amy Trigg. “ I worry for my husband and son every day.”

Trigg said although Mercer County has less racism than other places it still exists here.

“We are here to bring awareness to the injustice in the justice system,” said Ford. “Black Lives Matter.”

The protest is currently peaceful and most passerby vehicles wave or honk in support.

Other protests in this past week haven’t remained peaceful as outrage of George Floyd’s death in Minneapolis. Minnesota, last week and Breonna Taylor in Louisville this past March sparked violence.

According to LEX 18, hundreds of protestors have gathered in Lexington this evening to protest against police brutality.

This morning, the Governor issued a video message and signed a letter to deploy approximately 350 Kentucky National Guardsmen to help provide safety and protection to the citizens of Louisville. 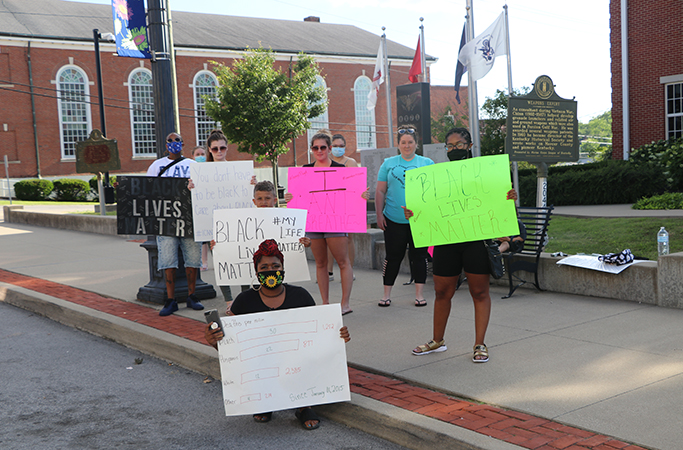 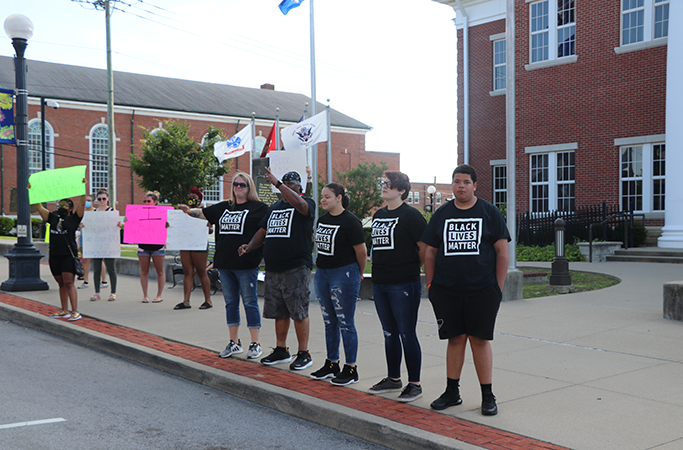 In his message, the Governor said Breonna Taylor’s death was tragic and that he can never understand the depths of feelings many Kentuckians are experiencing, but he pledged to listen and do everything he could moving forward.

He added that the demonstrations started out peacefully, but especially last night, outside groups moved in and are trying to create violence and harm to everybody who is on the streets.

This is a developing story. The complete story will be in next week’s issue of the Harrodsburg Herald.

Pictured: Diamber Ford and a group of protesters took to the court house steps Saturday evening to bring awareness to injustice in the justice system.  The Trigg Family, Amy, Rennie, Keyava, Cassie and LJ donned matching shirts while protesting on the court house steps in Harrodsburg Saturday.