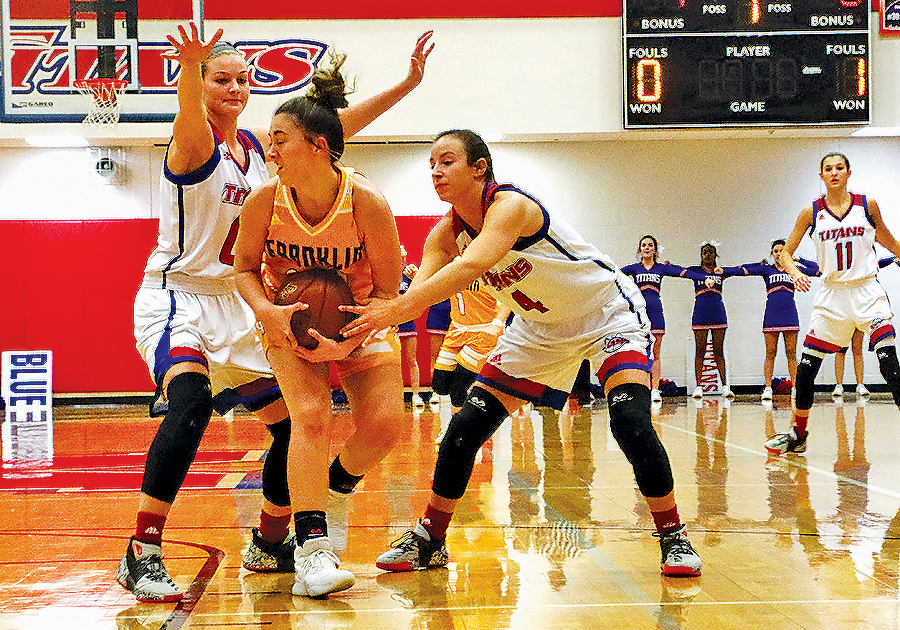 Former Lady Titan teammates Emma Davis and Seygan Robins will be back on the court together at University of Tennessee in Martin. (The Harrodsburg Herald/Arpan Dixit).

She began her legend in 2013 when the King Middle School Lady Titans won the state championship trophy. Robins later led the Lady Titans to the first two high school basketball state titles in the history of the school when they dominated back to back Sweet 16’s in the 2017 and 2018 seasons. She then became the only Lady Titan to ever win the Ms. Basketball award when she received the honor along with fellow Titan, Mr. Basketball Trevon Faulkner in 2018.

They remain the only two players from the same high school to win the award in the same season.

Two years later, the top-ranked recruit decided to further her basketball journey at the University of Louisville. After two years of great experiences and memories that will last a lifetime, she is now transferring to the University of Tennessee in Martin.

Robins’ goal was to find the school that made her feel at home. She was looking for a place in which she could fit in with the team and coaches on and off the court. Eventually, the small community of Martin and the closeness of the team and staff was the determining factor in Robins’ decision.

The Skyhawks have a competitive basketball program that competes in the Ohio Valley Conference.

“UT Martin has a great program that has consistently been at the top of the OVC and I look forward to competing there,” said Robins.

“I’m just hoping to come in and help an already great team be better in any way that’s asked of me.”

In addition to the inviting community and tight-knit atmosphere of the program, Robins will be teaming up with former Lady Titan and two-time state champion Emma Davis who graduated with Robins’ in 2018.

Robins and Davis are a force to be reckoned with on the basketball court and they are both excited to pick up where they left off.

“I am beyond excited that Seygan decided to come to UTM. I can’t wait to get back on the court and play alongside her again. I’m glad to have my best friend back on the same team with me,” said Davis.

“Emma is one of my best friends so it’s definitely a bonus getting to play with her again. She was able to speak to the culture at UT Martin and how well their team got along with each other as well as how much she enjoyed the campus and her teammates,” said Robins.

Davis also believes that Robins will transition swiftly into the UTM squad.

“Seygan will adjust to Martin just fine. Martin is a small town like Harrodsburg, so she won’t have any trouble adjusting. She is a hardworking and selfless player who will impact our team in many ways on and off the court,” said Davis.

From her days as a Titan to her time as a Cardinal and now a Skyhawk, Robins is very thankful for the memories and most of all her support system.

Her family has been nothing but supportive throughout her decision-making process. As well, memories made and lessons learned have given her the experience needed to succeed in the OVC.

“As for my time at Louisville I’m very grateful for the two years I spent there. I made memories to last a lifetime, and even better I made lifelong friends there,” said Robins.

“As a Titan as well as a Cardinal my coaches taught me you can accomplish a lot in basketball and in life through hard work and grit.”

The Titan basketball star is a monument to Mercer County High School and will forever be celebrated in Harrodsburg.

She can be seen playing this upcoming season in navy blue, orange and white as the UTM Skyhawks attempt to make their ninth Ohio Valley Conference tournament championship appearance in the last 11 seasons.