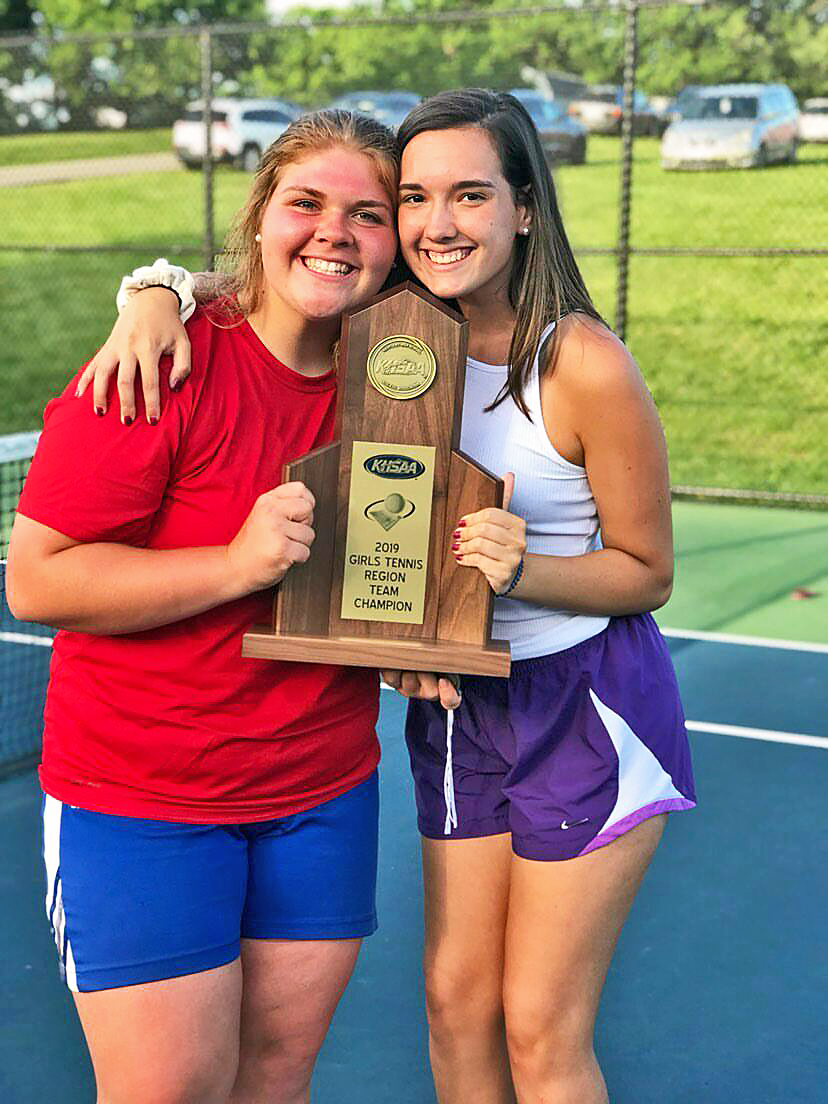 Kirsten Bryant and Raegan Long were all smiles after winning last year’s regional championship. Both the boys and girls seniors hope to make one last push for a regional title. (Photo submitted.)

The Mercer County Tennis program had big aspirations this season. But no matter how big the goals, they were certainly attainable in the eyes of the athletes, as well as, head coach Shawn Curtsinger.

After taking over for the Titans in 2018, Curtsinger took his young teams and taught them to use the potential they possess. In his first season as head coach, he helped lead the Lady Titans to a regional championship, along with a singles champion for freshman Rebecca Trent.

After the 2018 season, there was more work to be done. Both the boys and the girls teams put a lot of hard work put in the off season and the Titans were expecting a huge year, and a huge year they had.

The boy’s team found a groove and with many juniors on the 2019 team, they showed more maturity in their play. Despite not winning region, there was a lot of progress gained.

When the 2020 season was getting started, the student athletes did not hold back on their expectations “At the very first practice, I knew how great we were going to be this season. There wasn’t one person on the team who wasn’t committed to getting better,” Senior Raegan Long said.

After winning at the level they had, the girls knew there could be great things ahead.

As for the boys, they were looking to finally take that big step. Every athlete on the team wanted a region championship and with now five seniors on the team, it was certainly capable.

The season and it’s results were all in the hands of the athletes, until it was suspended indefinitely.

“With high hopes and expectations for both the girl’s and boy’s in making a strong run at regional championships, it has been very frustrating for both teams. My spirit aches for all my players, and it is especially disheartening for all our seniors; the hard work they’ve put in for four plus years and the expectations of a great season ahead,” said Coach Curtsinger about the current standing of the season.

It is truly heartbreaking for every student athlete, but especially for the seniors having their final season derailed before it could even start. For these Titans it means even more. This was their big year. They have won throughout their careers, but this year was expected to be on an entirely different level.

“We had too much talent and that’s a good problem to have,” ssaid Long about the girl’s team.

“I’ve never been more excited about a season in my life and unfortunately I might not be able to participate in it,” said senior Kobie Wessling about the boys team.

Throughout the troublesome time and worry, they are all trying to keep a good mind-set. Hard work got them to be where they are today and it won’t stop now because of a delayed season.

Kiersten Bryant, felt strongly about the current situation, but was extremely humble and knew that there’s always more for everyone in life. “The Bible talks about how we should consider it pure joy when we go through troubling times and when we are going through a storm because it makes our faith stronger and relationship with Christ grow. Yes, I am upset about not being able to finish goals I worked for a year to accomplish, but I want Jesus to be glorified through every aspect of my life. I am thankful that throughout this storm, I have had the opportunity to get closer to Him and maybe let others know about how being in a relationship with Him is the best win in someone’s life. Not a temporary game,” said Bryant.

Through fear and uncertainty, the Titans will keep their heads high and hope for the best.

“We have outstanding scholar athletes that have, and will continue to excel, in other areas of life. Depending on quarantine guidance, discussions with state officials will determine any opportunity of a potential summer tournament.  We remain both hopeful of summer months and focused presently on taking care of ourselves within family life and this quiet time of reflection,” said Curtsinger.

There is still hope for this season to have a happier ending, but regardless of the outcome the Mercer County Titan Tennis program, especially the 2020 seniors, have a lot to be proud of.

Listed below are the names of the 2020 seniors for both the boy’s and girl’s teams that deserve to be recognized and honored for their hard work and dedication over their high school careers.