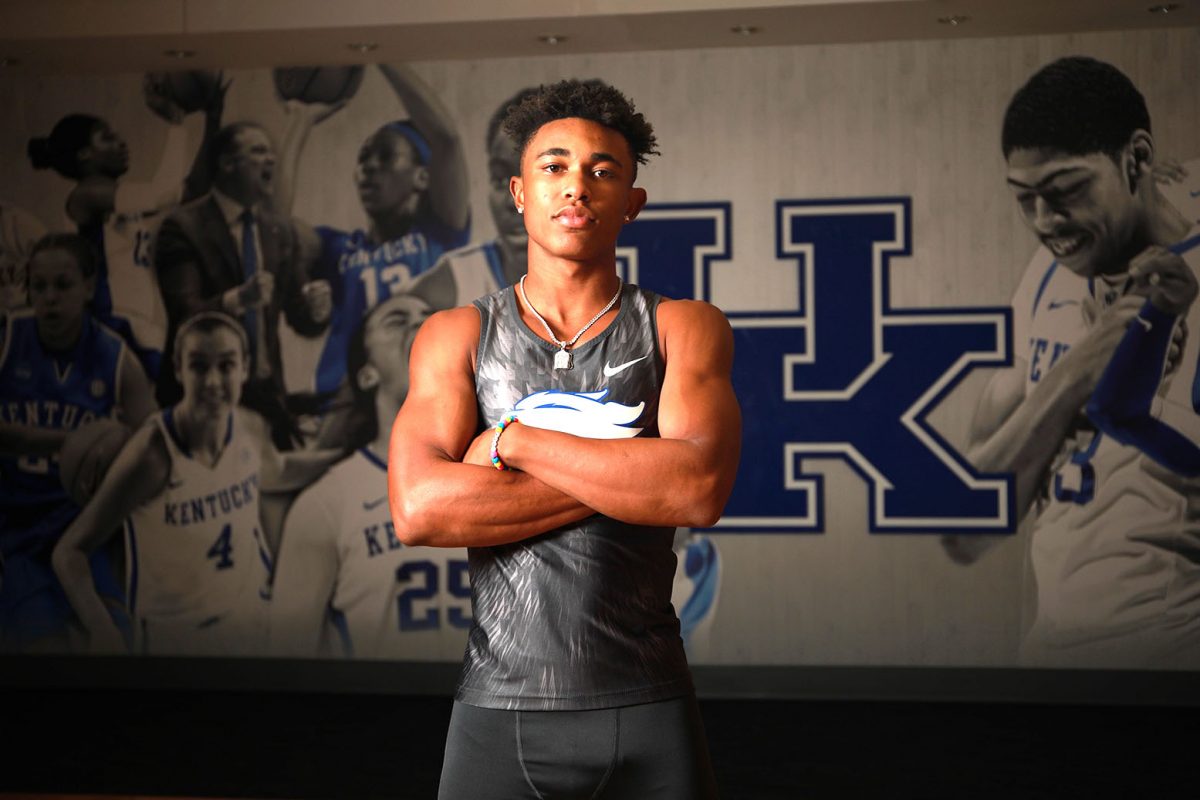 Teammates and good friends Ezarious Roller (not pictured) and Marquise Kinley will be joining a prestigious Wildcat program after graduation. (Photo submitted.)

Boyle County track and field has had many gifted athletes come in and out of the program.

No matter the sport, the Rebel program produces talented athletes with nearly every graduating class. This year on the track and field team, they have multiple standouts. Two of those, Ezarious Roller and Marquise Kinley, have committed to the University of Kentucky.

“I couldn’t stop imagining myself there for the next four years, it just clicked and I wanted to be a part of it,” said Roller.

Roller and Kinley compete in different events, but have the same goal of winning in every meet. Throughout their Rebel track and field careers, Kinley participated in running events and specialized in the triple jump and long jump. Roller specialized in the shot-put and discus events.

Ezarious had a tough decision to make when it came to where he would further his athletic and academic career. Not only did he receive offers for track and field programs, but he also received offers to play footballl. However, Roller is sure he has made the right choice and is excited for his future as a Wildcat.

Both guys have had stellar careers as rebels and individually.

The program will certainly miss them along with the rest of the Rebel seniors. As of now, the season is suspended indefinitely, with a good chance of cancellation. Though their careers aren’t yet over.

To them they will always be a Rebel. No matter where life takes them, they are proud to have been part of such a program.

Even though Ezarious wasn’t originally from Boyle County, he fit right in and was welcomed by all, including his good friend and teammate, Kinley.

Roller says Kinley was one of his very first friends when he made the move to and was only one of the many reasons he felt at home.

“I wasn’t raised in Boyle County my whole life like most of the people that live here now, but the thing is, as soon as I got here I was always treated like I’d been here forever. Boyle County is just one big family and one of the greatest experiences I’ve had in my life is being around the big family that Boyle county is. It’s why I’ll miss Boyle County High Cchool, because I’ve made so many memories with all the friends and family I’ve surrounded myself with,” said Roller about his time as a Rebel.

As for Kinley, he is just as proud, “I am very proud of my school and being a Rebel as well. I have always been a part of great, winning teams at Boyle county. From track and football even, the standard has always been higher for the athletes at Boyle County because we are known to win. The thing I will miss the most after I graduate is the friendships I have made and how now we are all going to have to go our separate ways.”

It will be disappointing if these two never get to represent the Rebels in a track and field event again. Regardless, having these last few months of school taken away is sad for any senior. These months are supposed to be some of the most memorable and it is heart wrenching to see these moments being taken away, especially for those losing their final seasons.

“It’s honestly heartbreaking to know that I’m not going to have a senior season,”Kinley said. “This season was going to be one of my best. I worked hard during my indoor season to prepare myself to be the best, and definitely had hopes of getting another (state championship) ring.”

Roller said, “Honestly, I was pretty angry when they first said the season was delayed for a month because I had already begun to throw farther than I had the year before and it was my chance to finally take an individual state championship metal home. I’d gotten closer every year and for my last shot at it to be taken away so quickly it hurt. But I just try to look at it as positively as I can, because some people may never run or throw again in their life, while I was blessed enough to continue my track and field career at UK.”

Lexington is now the next step. Barring a complete change in the outlook of the current season, the next time these two talented student athletes compete will be in a Wildcat uniform. With a lot of hard work and dedication, their dreams are coming true.

“UK just felt like home, and I know that I can be a great addition to the strong team they already have. I’m looking forward most to making new friends on campus and working my hardest to perform at my very best,” said Kinley.

Their careers have already been filled with great success, but both Roller and Kinley know their careers are far from over.