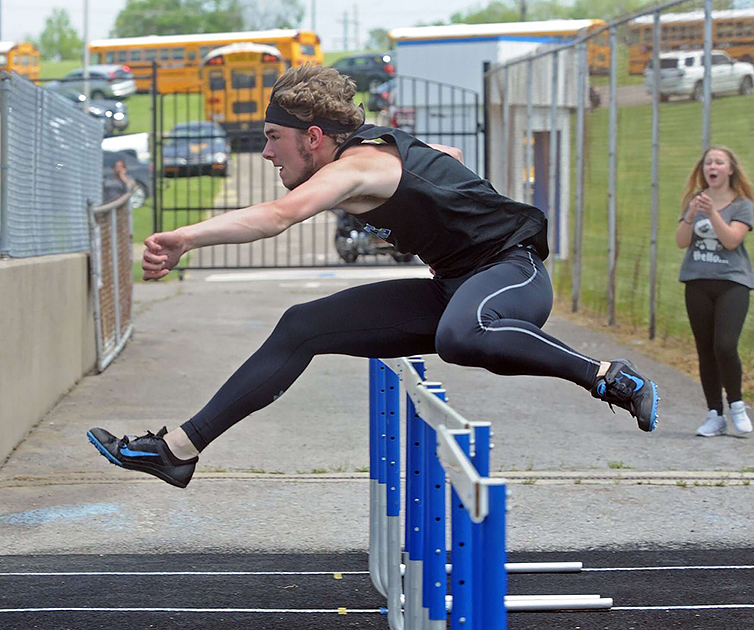 Gabe McKnight aims to leap ahead of the competition next spring by using his downtime to improve his performance. (Photo submitted.)

Danville High School has had quite the run with their track program. After a 28 year state title drought ending in 2018, the Admirals have only moved forward.

One of the key athletes on that 2018 championship roster is senior Gabe McKnight.

McKnight has been running track—and winning—ever since middle school. For Danville, he was a state champion in the 100 meter hurdles as well as the 300 meter hurdles. He set new state records in both events.

The potential of his career was all in his own hands, and he didn’t let his middle school accomplishments be the highlight of his career. In his freshman year, McKnight earned a spot to participate in the AAU Junior Olympics in Detroit, Michigan. It would only get better and better for the athlete, along with the rest of the Admirals.

In 2018, Danville dominated in most of their events, eventually winning regional and state championships, beating out runner up Walton Verona by only 10 points.

McKnight set a personal record in the state meet with a 110 meter hurdle time of 15.11. He still had two more seasons to improve.

At the beginning of the 2019 season, the Admirals felt as though they could repeat as state champions given their talent. But first, they had to take care of their regional title.

After some confusion and a close finish, the Admirals proved themselves as regional champions once again. Unfortunately, they did not repeat in the state meet. But once again, McKnight knew there was more ahead for himself.

After his many strong performances throughout middle school and high school, McKnight picked up college interest. After taking visits to different schools, he made his decision right before the start of his final track season. McKnight had committed to the University of the Cumberlands Patriots.

“When I visited U.C. I felt at home right away. The Campus is absolutely gorgeous, and I just had the gut feeling that I would thrive there for the next four years. Their facilities are gorgeous,” he said.

McKnight is excited for his next step in his track and field career. He has always pushed himself to be the best he can both in and out of the classroom.

For as exciting as joining the program may be to McKnight, he still was looking forward to the 2020 high school track season.

All of the hard work put in was really looking to pay off big time in his senior year. That was until the spread of COVID-19.

At first there was hope that the season would just be slightly delayed, but after the recent orders to suspend the spring sports indefinitely, it’s looking more and more like McKnights senior season wont take place.

“It sucks. It really does. I was looking forward to this track season more than anything else this school year,” he said. “I wouldn’t wish this on anyone.”

But like every other year of competition, no matter the result, there is always be a next step. It is now time for McKnight to prepare for his freshman season with the Patriots.

“I still workout at home,” he said. “All I can do is focus on my collegiate career from now on.”

Working hard at getting better will be key for McKnight in his first year. No matter how he performs, making it to this level is something to be proud of.

The city of Danville and more specifically the school system, has meant a lot to McKnight and his family. He has a good head on his shoulders and is thankful for his family at home, as well as his family in the athletics program.

“I can definitely say I’m proud to be an Admiral,” he said. “I have such a home feeling when it comes to Danville. Being someone to work towards an overall goal is what being an Admiral means. Being an Admiral is executing the necessary actions for the best possible outcome for everyone. I’ll miss all of the school events, for example homecoming week, where we dress up doing all the funny themes. I will cherish these moments forever.”

The story of his track and field career is far from over. After graduation, McKnight will be locked in on preparing to be a Patriot.