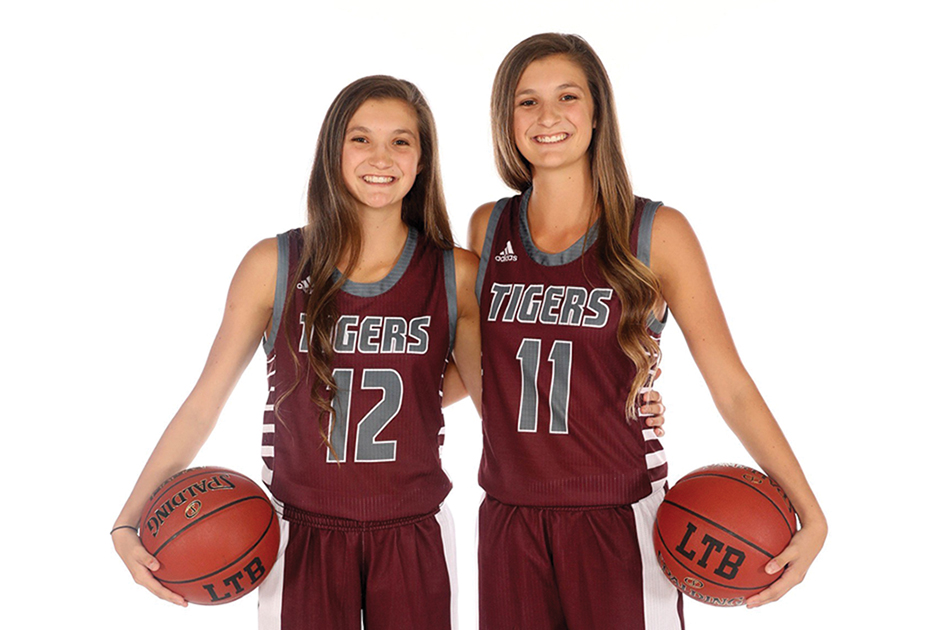 Faith and Lexy Lake were looking at a possible title to cap their junior years with the Campbellsville University Tigers. The sisters are taking advantage of the extended downtime to bring home a championship next year. (Photo Submitted)

Faith and Lexy Lake have achieved significant success throughout their high school and collegiate basketball years.

Standouts on the Lady Titans basketball team that won back-to-back state championships, both sisters are now attending the University of Campbellsville and are working hard at carrying over the same success.

Both Faith and Lexy have played valuable minutes for the Lady Tigers, and both are shooting the ball at a very effective rate.

In high school, both girls were known for their stellar performances from beyond the arc. In fact, Lexy Lake was invited to the national high school three-point competition, finishing second behind Maryland signee Taylor Mikesell.

Converting over to the college game hasn’t slowed either of them down. In their sophomore year, both sisters shot around 40-percent from deep, with Lexy staying at the top of nearly every statistical three-point category in the country.

Coming out of high school and jumping right into the collegiate level shooting these kinds of numbers is no easy feat.

Both sisters talked about the adaptations it takes to continue a high level of play, like learning new defenses and playing with new teammates. They also talked about their growth since playing their first season.

“I feel like this past season things started to click more for me, I was able to get more into a rhythm,” Lexy said. “Mentally I had to learn how to watch film and how to use a scout created for the opposing team. It took a lot of adjusting but it definitely helped my game.”

“I think we gained a lot of experience our first season which led to a little more playing time this season,” Faith said. “I feel like I got stronger and all around better on the court. Mentality wise, I just knew I had to be ready when my number was called.”

The sisters caught their stride and weren’t caught off guard by a sophomore season slump.

They helped their team earn a 29-3 record. The team was hot all year long and never showed any true signs of slowing down.

Both girls knew this very well could be a year they won it all. The NAIA national tournament was right around the corner for these two, when unfortunately, the COVID-19 virus hit the United States and all sporting events for the near future were cancelled.

“The news was honestly gut-wrenching,”  Faith said. “We had a pretty good season and felt really good about our chances at winning the title.”

Lexy said the seniors on the team were deeply affected. While they got to complete a full regular season, there was just so much disbelief and disappointment in the way it ended.

“This season was so much fun and I will remember it forever. I cannot believe our season ended the way it did…it was pretty crushing. Our seniors didn’t deserve to go out that way and i honestly feel like we had a really good chance at winning the NAIA national championship.”  Lexy said.

There is always next year though. Lexy said that all they can do is use the unfortunate ending to the previous season, to help fuel them for the next.

Both girls want it all. They have high expectations for themselves and their team. When asked what their goals will be on their junior season, they each had the same mind set, that the championship is there for them to win. They will be looking at next season as unfinished business.

That doesn’t mean they’re over confident.

Faith said her personal goal is to work hard during the extended offseason to level up her game play.

“I really need to take my game to another level,” she said. “This season I shot the three well, but that won’t be a secret next season so I need to add more to my game.”

She added, “I really need to work on my jump shot and getting to the basket. I also need to get stronger and focus on my lifting this summer.’

“Mercer County means so much to me,” Lexy said. “This is where I grew up and learned to love the game of basketball. The people in this community are amazing and I am so thankful for the support they have shown me throughout my career at Mercer. It means the world to me.”

Faith said Mercer County means a lot to her, too.

“My basketball career started here with an amazing group of girls that pushed me to be the best I could be every single day,” she said. “Because of these amazing girls and coaches, I am able to play at the next level which is amazing. The communities support has been great throughout my career and I can’t thank them enough.”

These two sisters are very proud of where they came from and deservedly are proud of themselves.