Smith And Short Head To Nationals 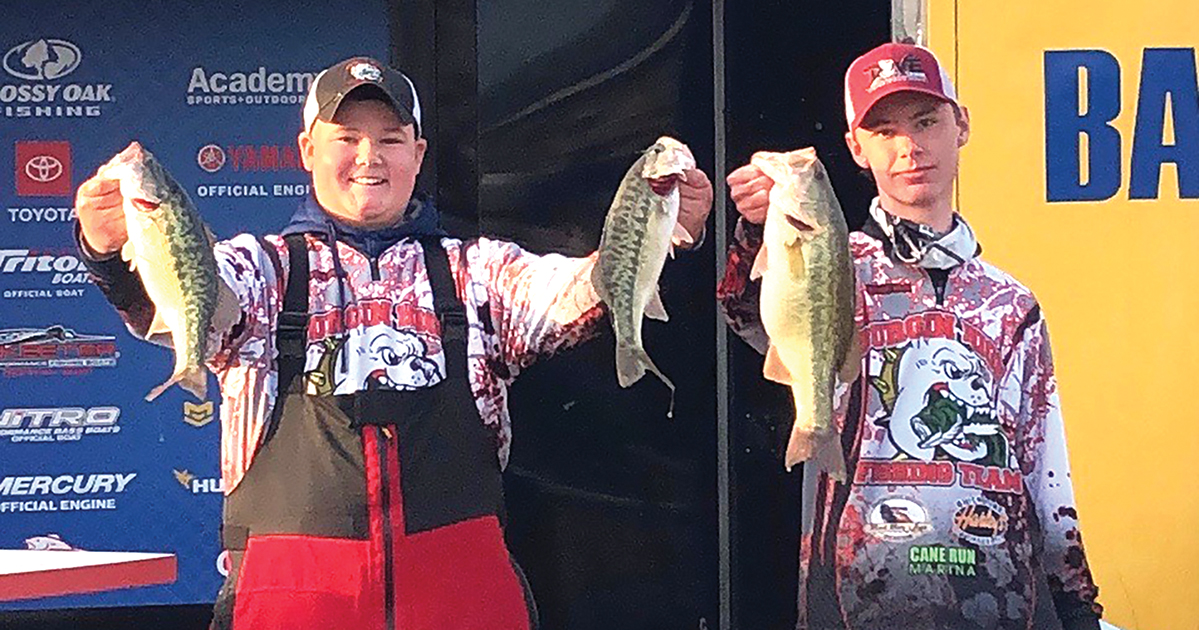 Hayden Short and Archer Smith finished 19th out of 250 teams at the B.A.S.S. National Qualifier in Alabama. Their greatest challenge may be preparing for a season when they have to practice social distancing. (Photo submitted)

Burgin Independent schools has had multiple success stories out of it’s fishing program, despite being relatively new. Two of its anglers placed in the top 20 in qualifiers to head to the Bass Federation’s Student Angler national competition in August.

Burgin’s bass fishing team has had one coach, Milton Hammons, and he has led his team to successful seasons and made sure they’re putting in the work to get the results they want.

Burgin won their first regional championship banner in 2015. With their team success has grown individual success. Burgin sophomores Archer Smith and Hayden Short recently competed in the B.A.S.S. National Qualifier in Alabama on Smith Lake, where they placed 19th out of 250 boats in the competition. This event involved schools from all across the United States.

Accomplishing their trip to nationals wasn’t luck. The two put in many hours of practice to learn the lake and the fish activity. This event is in a different state, meaning completely different fish activity and foreign waters.

When asked about what they did to prepare, both athletes had nearly the same answer.

“It took a lot of planning to be able to go into Alabama for the event. When we got down there to pre-fish that’s when the work began. From sunrise to sunset, we were figuring out what the fish were doing, where the fish were located and what they like, until we found a pattern. We finally found a pattern, which is key in placing good in these tournaments,” said Smith

“It took a lot of practice for Archer and I to really figure out the bass and to find a good pattern. We were able to go down the weekend before and practice. People may not realize that each lake and season are different. Without the extra time on the water our results may have been very different,” said Short

They are one step closer to their main goal and every bass fishing athlete’s goal, winning the national competition. It will take even more preparation and practice, but these two are willing to put in the work. Thankfully for them, the lake they will be competing on will be Kentucky Lake, so it won’t be too far from home.

However, with the complications of the COVID-19 cancellations, there isn’t much practice that can be done for now.

Not only would winning nationals make their dreams come true, just competing is still an honor to these two athletes. The tournament will be held on national television, just as it is every season, so there are a lot of opportunities in terms of sponsors and college scholarships. Both of them understand that this won’t be easy, but is worth all of the practice they can put in.

Short was asked what they do to prepare despite not being able to practice on the lake.

“We’ll focus on organizing our tackle boxes, practicing casting, researching Kentucky Lake and trying to find tips and clues that may further improve our chances of winning,” he said.

Both fishermen know what they want to achieve and will be anticipating the competition in the months to come.

“The same team has won it back to back years, so coming out and beating them will be quite the task,” Smith said.

“Winning it all or even just doing well and placing in the top 25 would be amazing and could help us gain scholarships,” Short said. “We’re glad to have represented our team, sponsors, school and our town.”