Steele: “I felt honored to be on the inaugural team for both sports” 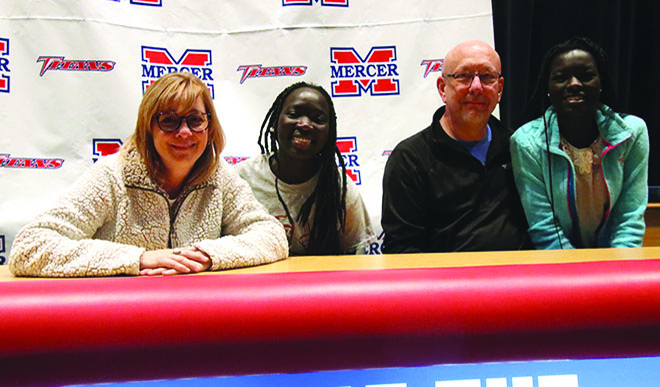 Mercer County senior Abby Steele is pictured with her parents, Roger and Kandi Steele, and sister, Emmy after her signing. (photo by Arpan Dixit)

In the next academic and athletic year, the inaugural track and field and soccer programs will be underway.

Abby Steele, a senior at Mercer County Senior High School, became the first ever member of the inaugural track and field team and will join Head Coach Paul Brooks’ staff on the soccer team, becoming the first dual sport athlete at CU-Harrodsburg.

“I just felt honored to be asked to be on the inaugural teams for both sports,” said Steele. “I love both sports. I see soccer as my hobby and track is my competitive sport, although I love both sports equally. I am very competitive in everything and I challenge myself every time I run or with every play that I make. I am excited to be a Pioneer like my Dad was in high school.”

Steele said she narrowed her choices down to CU-Harrodsburg and Brescia University, but ultimately decided to become a Pioneer.

“I decided on CU-Harrodsburg because of the student to teacher ratio. It was the best financial option and it was an honor to be a part of one of the first inaugural teams and the first track signee,” said Steele.

Her journey is different than most. Steele is originally from Ethiopia, but came to the United States in 2012. Her parents, Roger and Kandi Steele, adopted her and their lives changed forever.

“God has brought this beautiful young woman into our lives and we are forever grateful,” said Steele’s mother, Kandi.

“We are very grateful to have Abby in our lives,” said Steele’s father, Roger.

Steele didn’t speak English and no one around her spoke any of the five tribal languages that she was accustomed to.

“I placed my faith in God and trusted that he would lead me down the path I am supposed to go,” said Steele. “God gives second chances and opens new doors. My journey has been a long road and a battle. I thank God and my family for their support and guidance. I plan to make a difference for that that need my help after the new doors God as opened for me.”

Soccer is a very popular sport back in Ethiopia, and that’s where her love for the game grew as a child, but she never played organized soccer until she came to the States. When she first arrived here, Tony Brown was her head coach in middle school, where Steele learned to play the game.

“Coach Brown taught me the rules and regulations of the game,” said Steele.

“He worked with me on skills and endurance. He spent many hours teaching and training me to play and be competitive even when you’re behind,” said Steele. “He taught us to hold our heads high and be a good sport. I appreciate his time and support he has invested in me to make me successful.”

Culver talked about coaching Steele at the signing.

“This group of seniors this year was special to me because they were my first group of freshman when I started coaching here,” said Culver. “The first thing I noticed about Abby when she stepped on the field was that she was very quiet and kept to herself, but she has this smile about her that infects everybody around her. Anybody that knows her, knows that she plays the game 100-percent from start to finish. She’s a great teammate and I’m very proud of the person she has become.”

Steele’s soccer resume includes being team captain her final two years, earned academic all-state (2016, 2017), and during her senior year, was named to the all-district and all-region teams.

“He taught me more advanced ball skills, trick plays and how to play other positions that I did not play in high school,” she said.

“When she made the decision to not play club soccer in the Spring and focus on track, she went to another level,” said Steele’s high school track coach, Terry Yeast. “CU-Harrodsburg will not get anyone better than this crazy goofball. For soccer and track, she is going to be a huge asset for Campbellsville-Harrodsburg. We’re really proud of her and for what she’s done.”

Steele talked about Yeast and assistant coach Lynn Flach, who has coached her the last four seasons on the track.

“Coach Yeast and Coach Flach have been tremendous supporters. They both offer constructive criticism to help us learn and grow,” said Steele. “They both support us in every event. I was shy at first when I joined the track team but as time passed, they are like my family. I’m just very thankful for all the coaches who dedicated their time to make me successful and help me move to the next level.”

Steele plans on majoring in psychology and minor in social work.

“I plan to obtain my master’s degree once I graduate from college. I plan to work with special and disabled children,” said Steele. 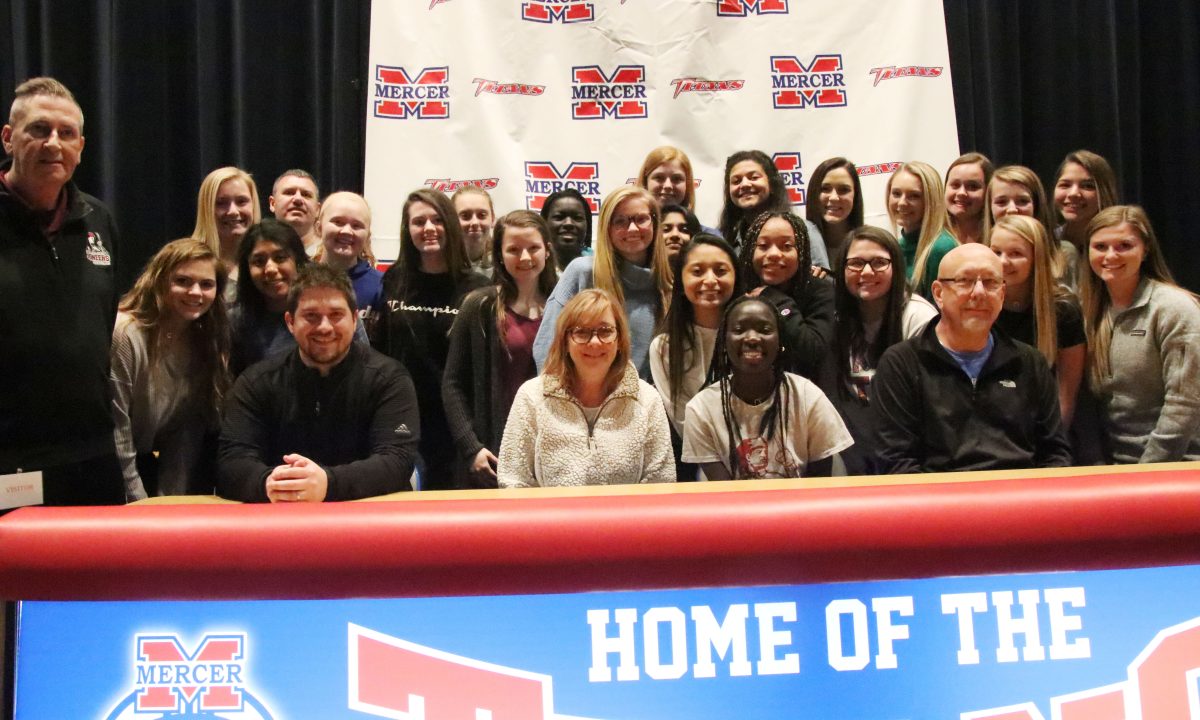 Steele is pictured with her family, soccer coaches and teammates. (photo by Arpan Dixit) 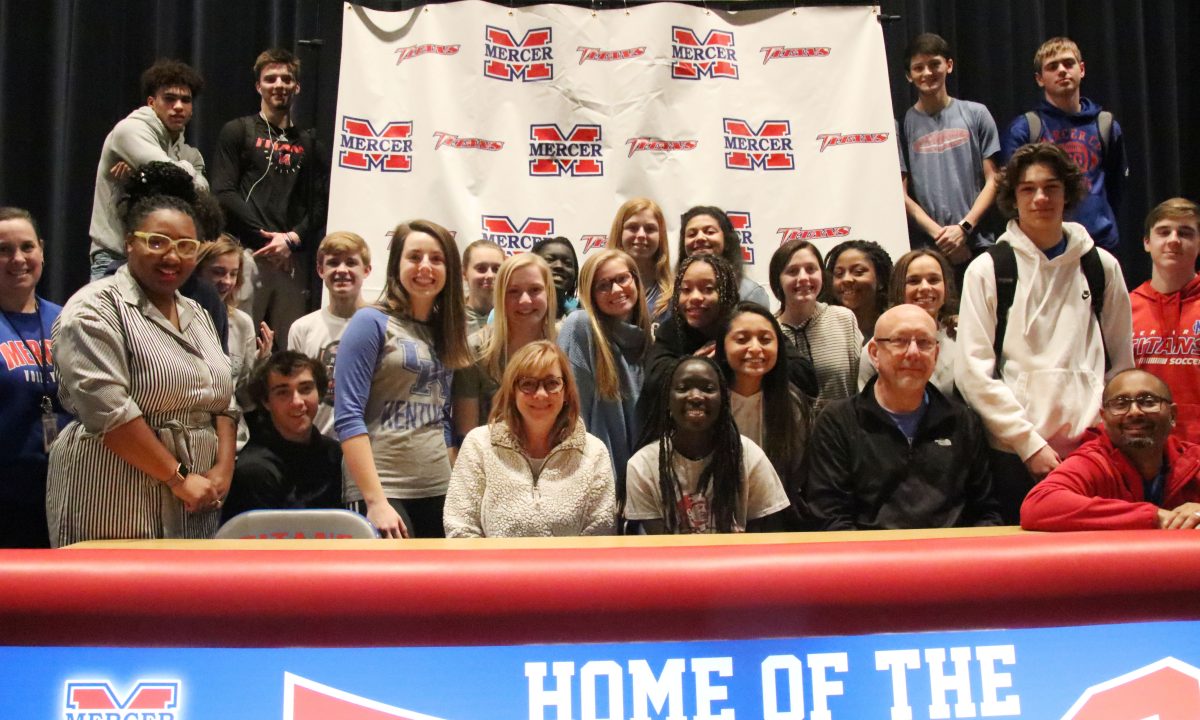 Steele is pictured with her family, track and field coaches and teammates. (photo by Arpan Dixit)