Miller: “The coaches made me feel like I was already a part of the team” 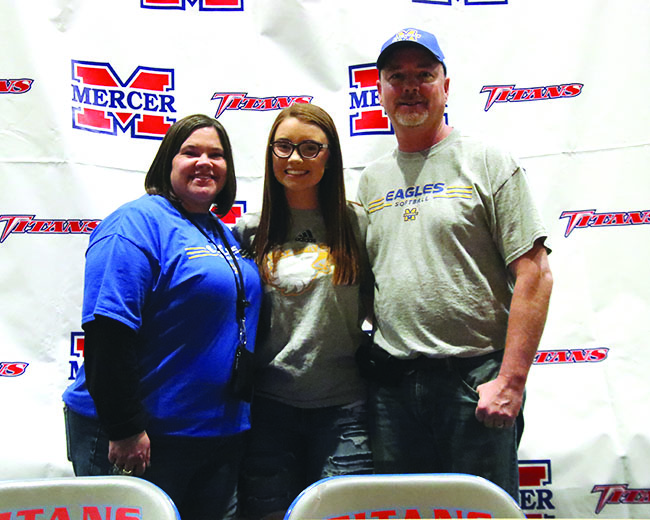 Mercer County senior Kynleigh Miller is pictured with her parents, Leigh-Ann and Keith Miller after the signing. (photo by Arpan Dixit)

Mercer County athletics have seen many student-athletes go on to play at the next level. Add another one to the growing list.

Senior Kynleigh Miller, a member of the Lady Titans softball team, signed her national letter of intent on Wednesday, Feb. 19.

“From the very first time I visited Midway, I immediately felt at home,” said Miller. “The softball coaches and players made me feel like I was already a part of the team the first camp I went to. Not only does Midway have an amazing softball team, but they also have an incredible nursing program.”

Miller said her decision was a tough one because she also received interest and held offers from Kentucky Christian University and Thomas More University.

Miller is primarily a pitcher, but can play all over the infield.

“I’m done this several times with several young ladies, but this one is special to me. Kynleigh has been with me for a very long time,” said Mercer County softball Head Coach Rob Tharp. “She has played for me for six years. Most girls don’t get that opportunity. We needed her and she was that good of a player. She came up to the high school team in seventh grade and there was no looking back ever since then. We’ve been through a lot together, ups and downs. These young athletes are going through different things at this point in their lives, and it’s our job as coaches to try get personal with them to an extent, show them love and be there for them. I’ve been through broken bones with her that I feel like I was a part of, unfortunately. We have a great season ahead of us and I’m just thankful to be along for the ride with her. I am thankful that she is able to continue her career. She got herself better and put herself in the right position to be successful.”

Miller said Coach Tharp always pushed her to be her best. That is something a student-athlete needs as they are growing up playing any sport.

“Moving up to play at the high school level as a seventh grader was difficult. My Mom had her doubts, considering I was so young. When I joined the team, Coach Tharp didn’t treat me like me like a little girl, he treated me just like any other high schooler on the field, which made me feel like I could accomplish anything I set my mind to,” said Miller. “Coach Tharp knows what I’m capable of, which is why he pushes me more than others. He always told me that whenever he stops getting on me is when I should be worried.”

Miller’s dad, Keith Miller, is also the assistant softball coach and has coached his daughter since she was very little.

“I’m proud of her. I’ve coached her since she was five,” said Coach Miller. “I know she’s worked extremely hard for what she has earned and Midway is getting a good one. I know she will get through nursing. It’s not all about athletics, but it’s a big step in her life and I’m just very proud of her.”

Miller talked about her Dad’s impact on her life and how he has helped her get her to this point in her life.

“Growing up with my Dad being my coach is probably one of the best things that’s ever happened to me,” she said. “We of course have our ups and downs when we’re on the field, but if it wasn’t for my Dad, I wouldn’t be anywhere near where I am today. Being a pitcher, you have double the practice. At the end of the day, my Dad, being my number  one fan, was always the one of the bucket. Just starting out being a pitcher, he was the one who never gave up on me and for that, I’m very grateful.”

“He saw me pitch at one of my travel ball games and we’ve kept in touch ever since. This first camp I ever went to, he introduced me to all the players and the girls welcomed me with smiling faces, making me feel like I was already on the team.”

Miller said she always knew that whatever she did, she wanted to help people, leading her to pursue a career in nursing.

“I want to end up being a neonatal nurse practitioner,” she said.

Miller is set to begin her senior softball season and has high hopes for her team.

“Going into my senior year, I don’t want to hold anything back. I don’t want to have any regrets that I didn’t push my team hard enough or give enough effort for my team,” she said. “As a team, we all just have to give everything we got and hold nothing back going into the season.” 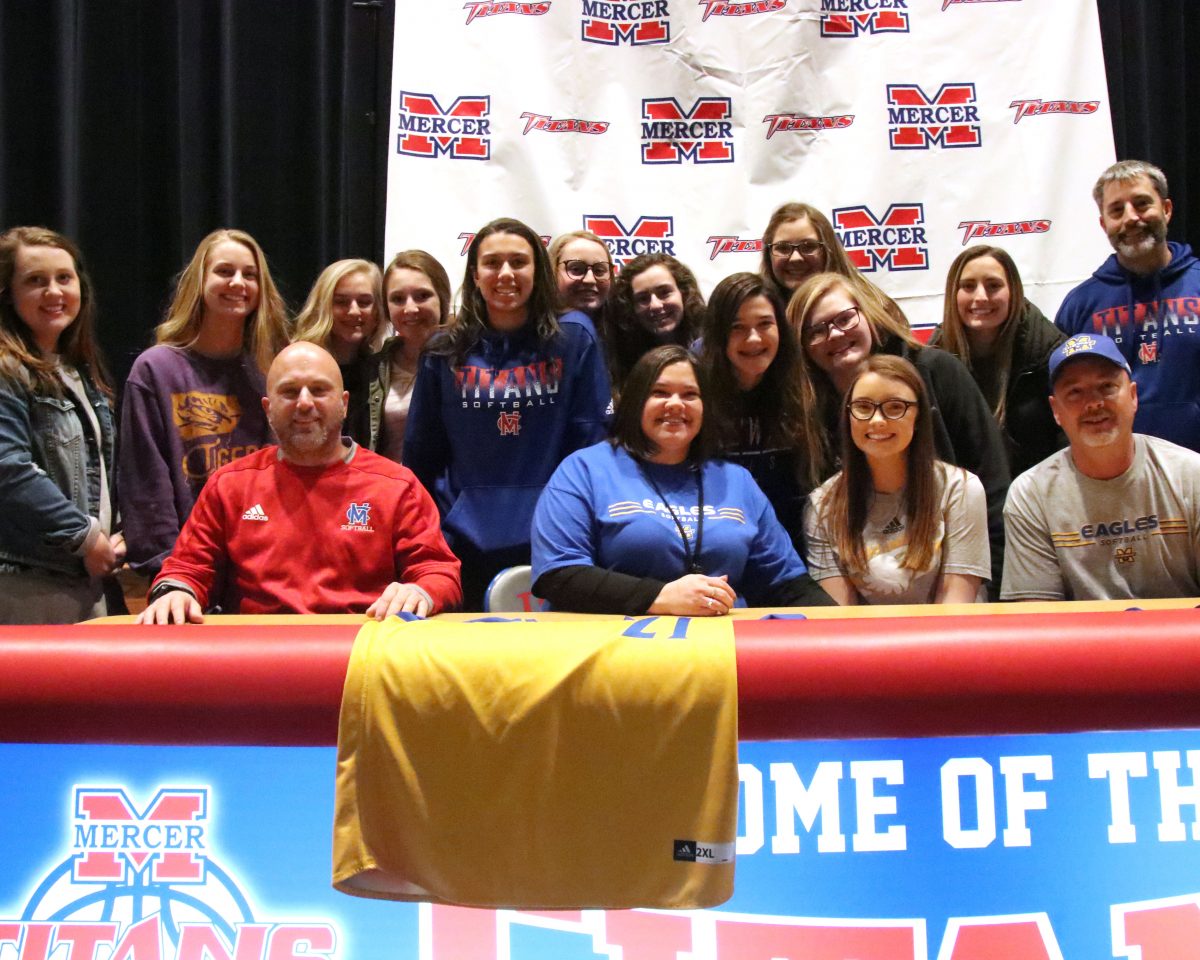 Miller is pictured with her family, coaches and teammates after the signing. (photo by Arpan Dixit)