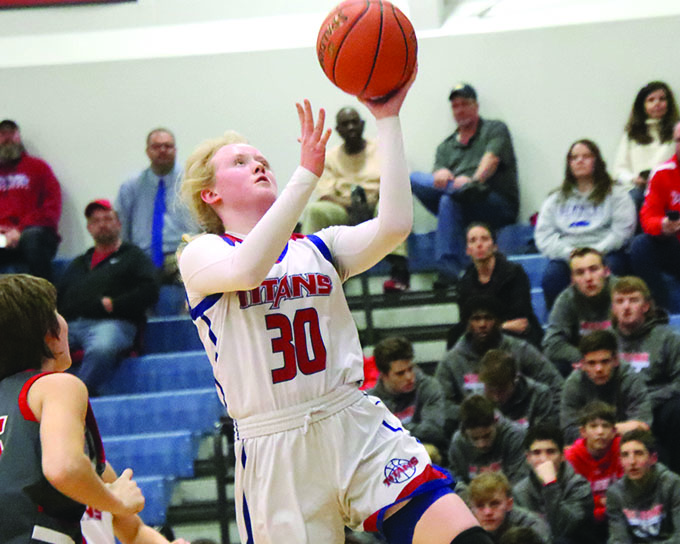 Mercer County freshman Lindsay Jessie goes up for two of her nine points against Burgin in the first round of the 46th District Tournament on Monday, Feb. 24. (photo by Arpan Dixit)

Mercer County (21-8) has ended Burgin’s (6-18) season every year since the spring of 2014. That streak continued on Monday, Feb. 24, in the first round of the 46th District Tournament at East Jessamine High School by a final score of 75-25.

“I thought we were a little bit sloppy to start the game to be honest,” said Mercer County Head Coach Hayley Spivey. “But, it’s the postseason. Nerves factor in and we just have to come ready to play. We had two or three in double figures tonight and everybody contributed ac

“I thought we pushed the ball and ran the fast break well tonight,” said Spivey. “There are things we have to fine tune but that’s in every aspect.”

“They competed. They’re still learning. There are still some things that they need to work on, but, I’ll give them credit. They showed no fear,” said Spivey.

Burgin senior Julia Arnett was the top scorer for Burgin with seven points to go along with two blocks and two steals. Seventh grader Gabby Thompson, who was inserted into the starting lineup halfway through the season, finished with six points, going 2-for-2 from beyond the arc.

“We battled and gave it our all out there, but Mercer County is so athletic and so good. They are very well coached,” said Burgin Head Coach Keith Monson. “We gave them everything we had and they still took it right at us.”

Arnett played inspired basketball in her final game of the season, something Monson was proud to see from one of his senior leaders.

“I think we’re learning the advanced parts of the game. We’ve gotten to be better ball handlers and better shooters and we’ll continue to work,” said Monson. “Julia went out playing with everything she had. We’ll miss her next season but I know her impact will be felt through our younger players in the future.”

The Lady Bulldogs end their season with a record of 6-18.

The Lady Titans will advance to the 46th District championship game on Thursday, Feb. 27. They will be going for their 12th straight district crown. You’ll have to go back to 2008 when the last time the Lady Titans dropped a district contest.

Spivey talked about how she will get her team to maintain focus heading into the district final.

“We talked about that. From here on out, we have to be ultra focuses no matter who we play,” she said. “We just have to stay focused and make it tough on our opponent.”

The Lady Titans will face either East or West Jessamine for the district title on Thursday night. 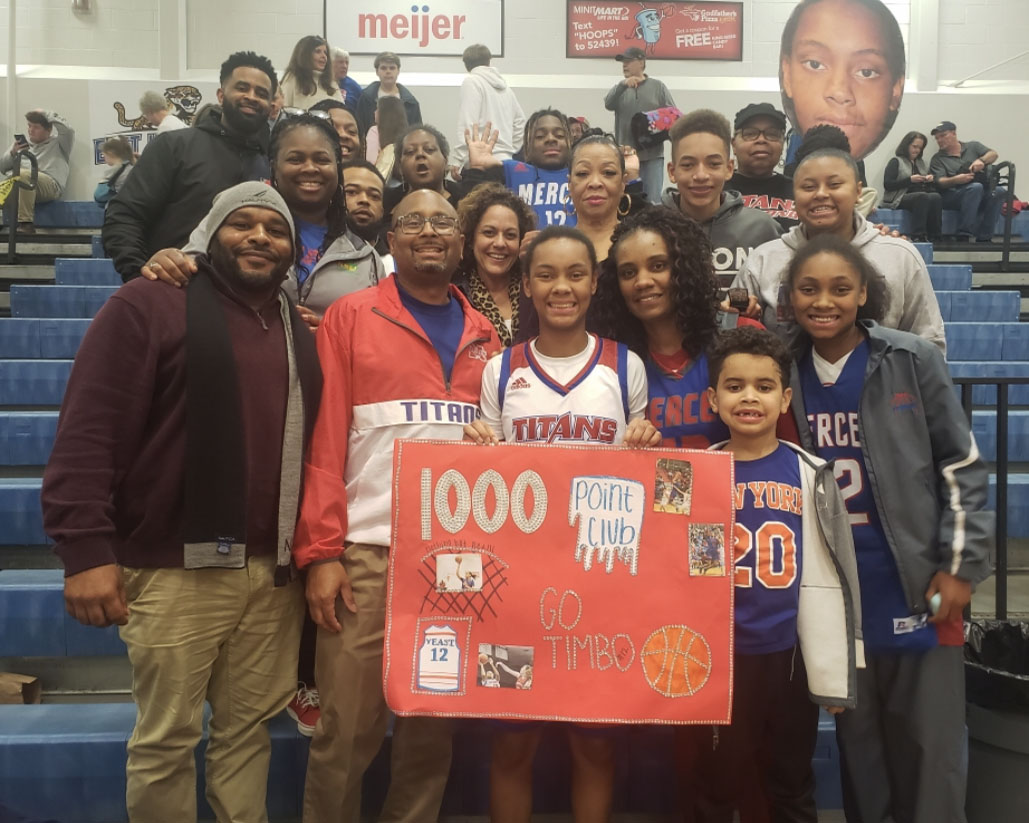 Mercer County freshman Timberlynn Yeast eclipsed 1,000 points in her young Lady Titans career against Burgin on Monday, Feb. 24, in the 46th District Tournament. Yeast is pictured with her family after achieving the milestone. (photo submitted) 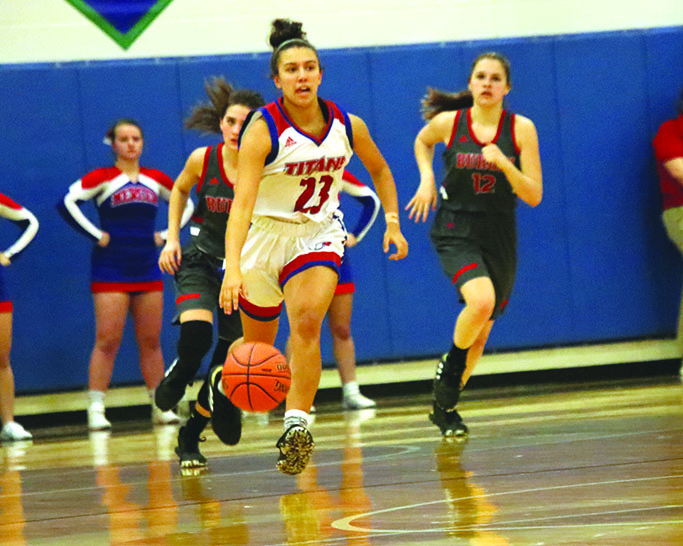 Mercer County junior Ry’Ann Tharp (23) grabs the rebounds and leads the fast break against Burgin in the first round of the 46th District Tournament on Monday, Feb. 24. (photo by Arpan Dixit) 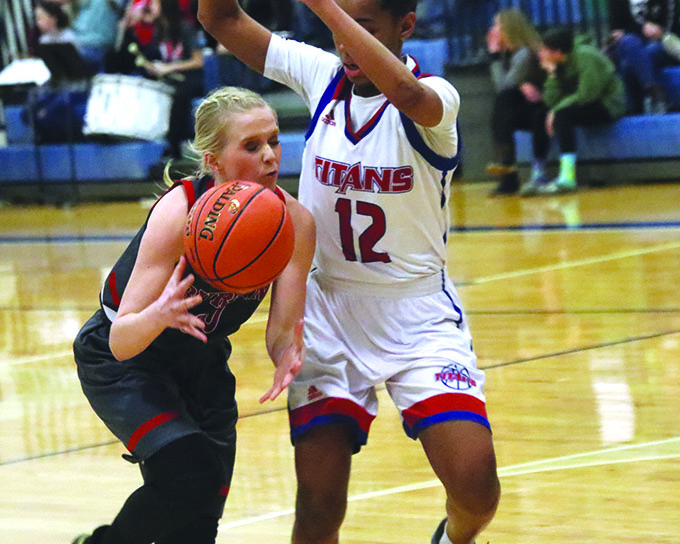 Burgin freshman Kaiden Lewis attempts to maintain possession on a drive to the basket against Mercer County in the 46th District Tournament. (photo by Arpan Dixit) 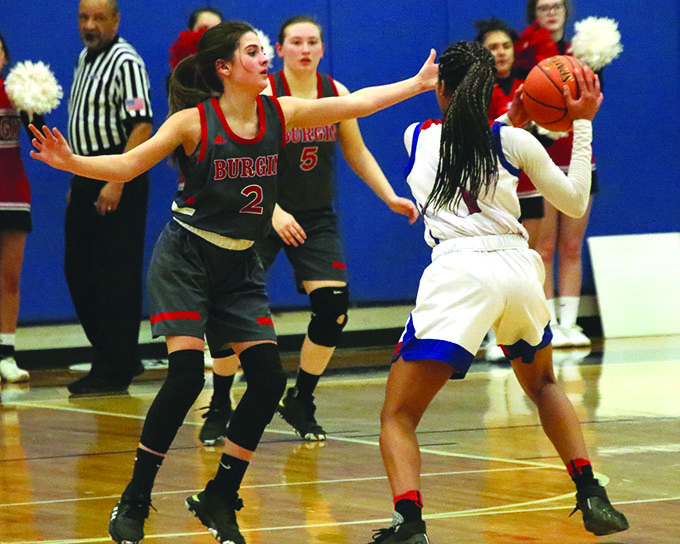