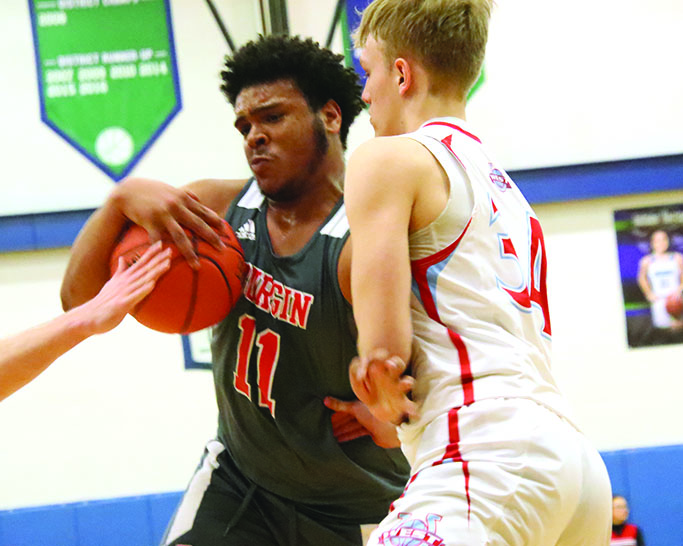 Burgin sophomore Roleeke Smith (11) drives to the paint against West Jessamine in the first round of the 46th District Tournament. Smith was second on the team with 16 points. (Photo by Arpan Dixit)

Burgin’s (4-27) first season under Head Coach Troy Lee Thomas has been a tough one.

The Bulldogs’ season ended on Monday, Feb. 24, in a 98-52 loss in the first round of the 46th District Tournament at East Jessamine High School.

Despite the season being a tough one, Thomas said he has enjoyed getting to know his players this season and is thankful for the relationships he’s made in his first season as Burgin head coach.

“I coached girls for 14 years prior to coaching these guys, and as a coach, you have to adjust,” said Thomas. “The big thing coaching boys this year was just being great and developing relationships that last a lifetime. These guys are going to be husbands someday. They’re going to be fathers someday and I want these guys to be able to come back years from now, see each other, and talk to each other about their time here. The relationships that you build is everything and that’s what coaching is all about. It’s been a great time for me to get to know these outstanding young men.”

The Colts controlled the game from the tip, with DeAjuan Stepp scoring a game high 31 points and hyping the West crowd with a flurry of dunks.

“We knew West was a strong team with good players, but I told our guys that anything can happen when tournament time comes around,” said Thomas. “You have to believe that you can do it first of all. Nothing is given. Our guys played hard tonight and we’re going to miss our seniors.”

Cole Mitchell and Wesley Tyler played their final game in a Burgin uniform on Monday night.

“We’re going to miss them. They’re going to be very successful and have great jobs one day,” said Thomas. “I told them when they make a lot of money, to remember me. I’m so glad that I got to know these two young men because they mean a lot to me and everybody in this program and the Burgin community.”

Tyler scored a team high 18 points, including going 4-for-6 from beyond the arc.

Burgin ended the first half on an 8-0 run, including two triples form Tyler, but trailed 50-26 at halftime.

West opened the second half on a 8-0 run of their own, spearheaded by Stepp. Clayton Winter and Landon Pugh each had 16 points for the Colts. Pugh checked in for the first time in the second quarter and nailed his first three triples to gives West a big boost. Nate Breeden was the last Colt in double figures with 12 points.

Freshman Jacob Qualls led the Bulldogs in assists with four and also finished with 13 points, including three triples.

The Bulldogs end their season with a record of 4-27, but as Coach Thomas said at the beginning of the season, it’s a marathon, not a sprint.

“We have a long way to go, but I know that these guys will buy in and we will have a bright future here at Burgin,” said Thomas before the season began. 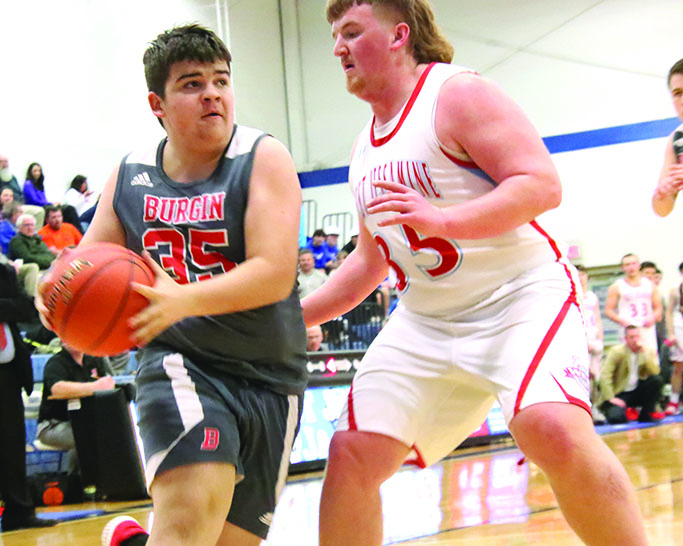 Burgin sophomore Landon Browning (left) attempts to drive past West Jessamine’s Luke Barr in the first round of the 46th District Tournament on Monday, Feb. 24. The Colts def. Bulldogs 98-52. (photo by Arpan Dixit) 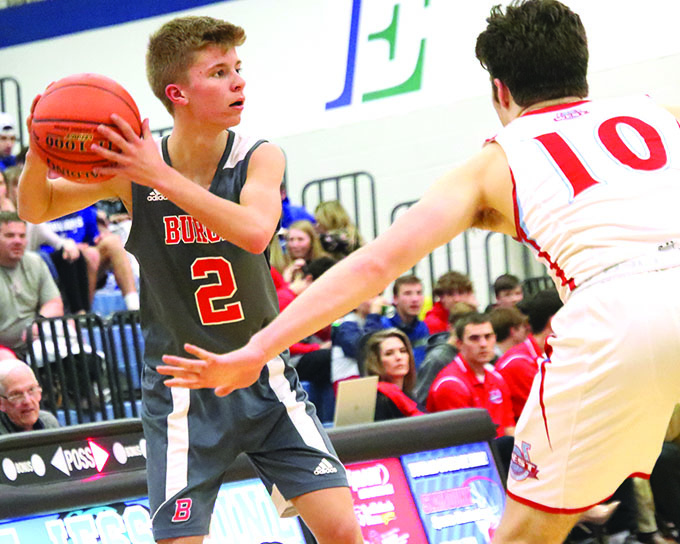 Burgin freshman Jacob Qualls (2) dribbles to the corner and looks for an open teammates against West Jessamine in the 46th District Tournament on Monday, Feb. 24. Qualls finished with a team high 4 assists. (photo by Arpan Dixit) 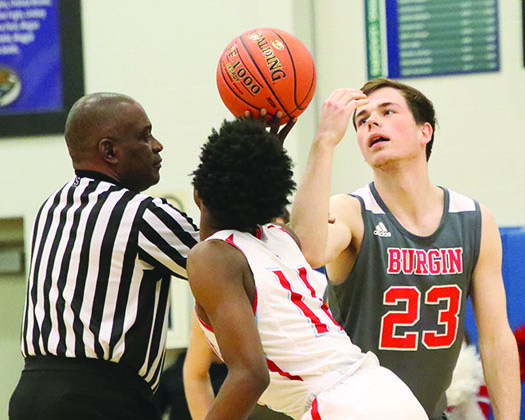 Burgin senior Wesley Tyler (23) gets set for tip-off against West Jessamine’s DeAjuan Stepp in the first round of the 46th District Tournament. (photo by Arpan Dixit)