Thomas: “The effort is there, we just have to play smarter.” 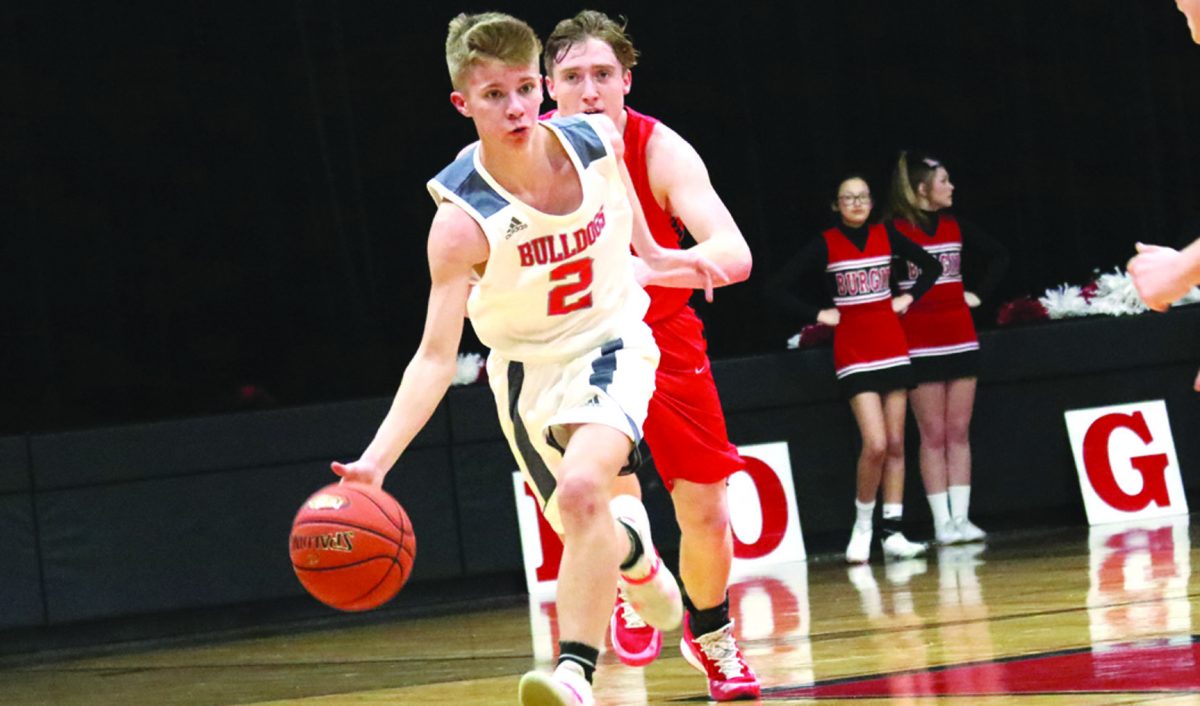 Burgin freshman Jacob Qualls (2) leads the fast break after securing the rebound in a 51-49 loss to Powell County on Monday, Feb. 10. Qualls had 7 pts and a team high 3 assists. (photo by Arpan Dixit)

“That’s 29 missed opportunities to get a shot off and that can’t happen,” said Thomas.

Both teams started the game off with seven straight turnovers on the first 14 possessions of the game.

The Pirates led 13-9 after the first quarter once both teams settled down and were able to maintain possession.

Powell County took a six point lead, 25-19, into the locker room. Sophomore Roleeke Smith led the Bulldogs with eight points at the half. Luke Pasely led the Pirates with six points.

In the third quarter, Powell County managed to build their lead up to 12. Sophomore Evan May found senior Wesley Tyler down low for two points to cut the lead to eight, 31-23, with four minutes left in the third quarter. Tyler was the top scorer for the Bulldogs with 18 points.

Smith also had a big second half, hitting his first triple to cut the lead to six with just under two minutes left in the period.

The Pirates were able build that lead back up to 12, but Tyler got hot and hit back-to-back triples to cut it back to six with just under five minutes to play.

“They (Tyler and Smith) played well offensively for us. I need them to play great on the defensive end too, which means grabbing rebounds, alternate shots and I need for those two guys to put pressure on the other team,” said Thomas. “Scoring is easy but you have to be able to guard somebody. I felt like as as team, collectively, we didn’t do a good job defensively. I’m proud of our effort. The next step for us is to play smart.”

Freshman Jacob Qualls found Tyler down low for two points to make it 51-49 in favor of Powell County with 50 seconds to play. That would be the final score of the game as the Bulldogs had the opportunity to tie or take the lead, but turned the ball over in the final seconds.

“We competed hard, but you have to win the pyshical stats like charges, 50-50 balls and just overall hustle plays,” said Thomas. “It’s more than just playing hard. We work on game situations in practice everyday. You’re hoping to replicate that into games. We shot ourselves in the foot at the beginning of the game with all the turnovers. We can’t get lost in the moment. We took two charges, which is what we wanted, but at the end of the day, it’s about rebound and hitting free throws. 29 turnovers just won’t cut it.”

Burgin will be back on the hardwood on Friday, Feb. 14, when they travel to take on Jackson City at 7:30 p.m.