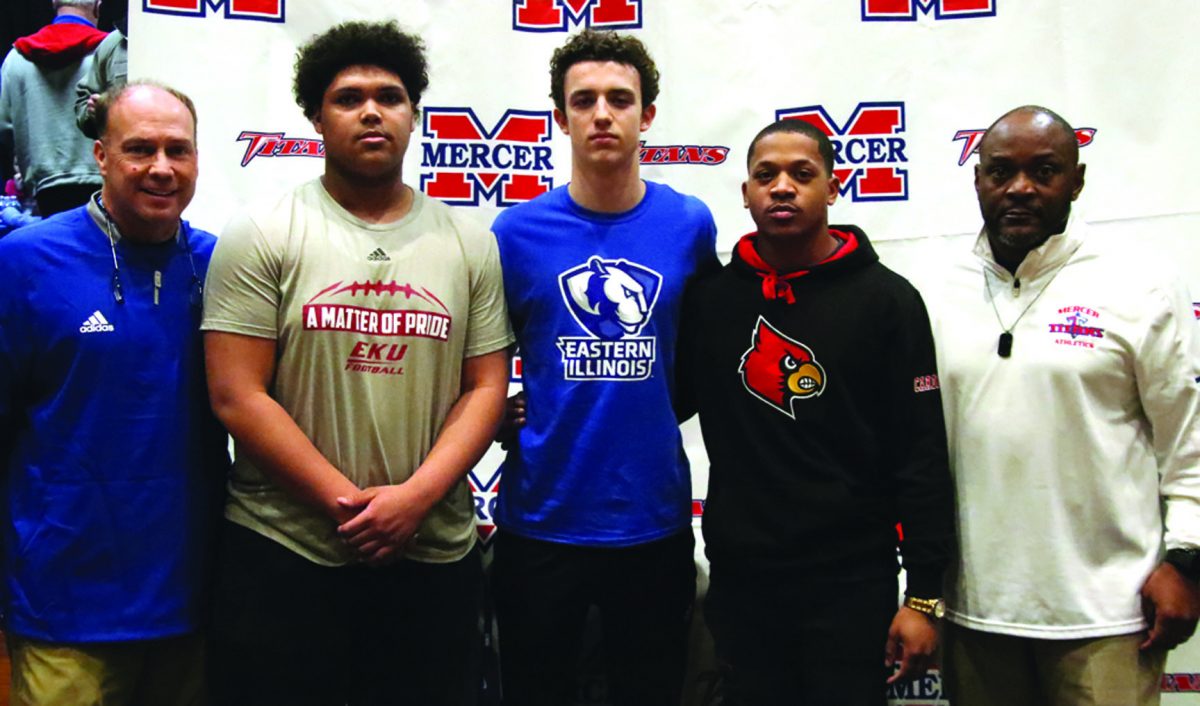 Three Mercer County football standouts recently made the choice to further their education and athletic careers.

Seniors Kaelin Drakeford, Malachi Yulee and Darrian Baker all signed their national letters of intent for their respective universities.

“We’re extremely proud of these three young men. One of the best things about football is that it really is an ultimate team game,” said Buchanan. “I think these three young men have had exceptional position coaches. We have assistant coaches that not only care about their players, but also really know their stuff and hold them accountable.”

Buchanan also thanked the families of the three seniors.

“It takes a lot of support and patience from the families to see guys get to this point,” he said. “Going to and from practice, keeping up with pride shirts and shorts. As proud as I am of these young men, I want to acknowledge the families, teammates and position coaches that made this happen. There is a lot of people that is a part of this success today. I’m very appreciative of all those people that have helped these three young men get to this point.”

Buchanan gave some advice to his seniors.

“Don’t come home. Once they take off and graduate, I don’t want to see them again until at the earliest, Thanksgiving,” said Buchanan. “Stay there. Come home and see us during the holidays. Keep going to practice, go to summer school if you want to graduate early. I love football, but the best thing about football is being a vehicle to have a successful life as an adult. Take those classes, get that master’s degree, do everything your coaches ask of you and you’ll be glad that you did.”

Baker sighted the proximity from home to EKU being a big difference, but not the only one.

“Eastern is home. It’s 50 minutes away and all my family, friends and coaches can come watch me at any point and I can come back and support Mercer County,” said Baker. “The coaches at EKU are just set on greatness. They went 7-5 two years in a row and they weren’t satisfied with that. They want to win a national championship. They want to be really great.”

Baker’s size, standing at 6 feet four inches, along with his athleticism is a big reason why coaches at the next level took notice.

Drakeford said the constant communication was a big factor in becoming an Eastern Illinois Panther.

“EIU really made it known how much they wanted me from the moment they started recruiting me and I really liked the coaches,” said Drakeford. “They told me about my opportunity to come in and play from the beginning. They stayed 100-percent with me the entire time and that really meant a lot to me.”

Drakeford not only gets it done on the gridiron, but also on the hardwood, averaging a double-double during his senior season for the Titans. That type of versatility is something college coaches look for. Playing and excelling at multiple sports is something that really catches the eyes of coaches at the next level.

Yulee was impressed with the atmosphere at the University of Louisville and what Head Coach Scott Satterfield is building.

“What separated Louisville from other schools was the program and the coaching staff. I felt like their program would be best in developing me into a better man. The overall atmosphere there also played a big role in my decision,” said Yulee. “The conversations I had with the running backs coach were genuine. What stood out to me the most was that they prioritized family and academics over football. Although football is a great sport, it doesn’t last forever.”

Yulee, who led the Titans with 928 rushing yards and 14 touchdowns on the ground, is tough to handle when he is in a rhythm.

“They are all great young men and I know they will succeed at football and in life,” said Buchanan.