Tigers pull away from CU-Harrodsburg in second half 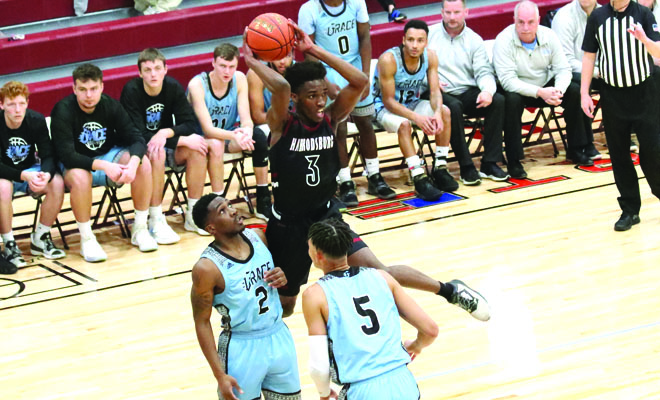 CUH freshman Marquis Dorsey leaps in the air and looks for an open teammate against Grace Christian University on Friday, Feb. 7. (photo by Arpan Dixit)

In his first season as a head coach, Austin Sparrow has had the challenge of taking over a team just before the season started, and has embraced that challenge.

“It’s a challenge being the youngest collegiate head coach in the state, but I’ve learned that it’s important to delegate your responsibilities to others that are in charge. Relying on others isn’t a weakness and I have been able to rely on advice from other head coaches,” said Sparrow back in September.

Most recently, the Campbellsville University-Harrodsburg Pioneers took on the No. 2 ranked Grace Christian University Tigers on Friday, Feb. 7.

After hanging tough in the first half, trailing by one at the half, the Pioneers ran out of gas and the Eagles came away with a 92-81 win after a big second half.

“We executed well in the first half with two of our starters, Shadarno Clarke and Jamal Weaver, out due to foul trouble,” said Sparrow. “We got key minutes from Marquis Dorsey and our bench to finish the first half strong.”

Austin Jackson and Brandon Winchester-Jones were a force for the Tigers, scoring 25 and 24 points, respectively.

The Pioneers were playing without the services of one of their top players, Tyron Duncan, who is out for the season with an injury.

“We’ve embraced the next man up mentality all year long with recent injuries we’ve had to make it a part of our teams identity,” said Sparrow. “We got a solid performance from our bench since he has been out and it gives our bench a great opportunity to continue developing.”

Dorsey’s and-1 and two made free throws on back-to-back possessions made the score 62-60 with 10 minutes to play.

Jackson managed to get going late after a strong start, scoring two points down low to extend the lead to 75-66 with five minutes to play.

Jackson and Winchester-Jones managed to control the game the last few minutes and helped No. 2 ranked GCU earn the win.

Weaver led the Pioneers with 21 points. Dorsey (17), Devin Baker (15) and  Antoine Darby (11) were the four Pioneers in double figures.

“We are a really good team. Our record doesn’t show it, but our strength of schedule is at the top of the entire NCCAA,” said Sparrow. “We have focused all year on the phrase, ‘it’s not about how you start the season, but how we finish.’ We’ve got to play to our strengths and further develop our identity as a team. It’s great to keep battling through adversity this season. Don’t count this team out during tournament time in two weeks.”