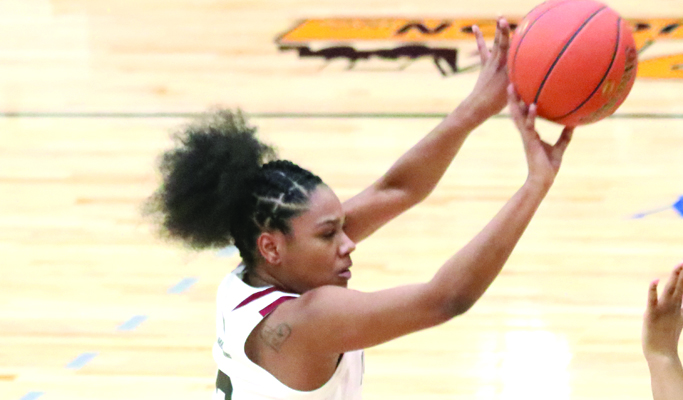 The Lady Pioneers forced 22 turnovers tonight as they continued to pressure the ball in a big win.

“I was extremely impressed with how we pressed. We decided to go with a different press due to the length that Oakland City has,” said Head Coach Brian Tribble. “They are a very tall team, who passes the ball well and I decided to press them man-to-man, and see if my team could guard one-on-one in the open court, which impressed me the most because we did a solid job and stayed out of foul trouble while playing an aggressive style defense, and we were able to turn them over and score in transition.”

CU-Harrodsburg was led in scoring by Oriona Woods with 19 points on 9-for-13 shooting night from the field.

“She (Woods) got back to her old ways. She had been struggling a bit, and we talked prior to the game and I just told her that I trusted her,” said Tribble. “She was able to take care of the ball having only turnover, and when she leads with her play, her teammates will usually follow.”

Kelynn Clay added 18 points on 9-for-16 shooting. E’moni Washington posted another double-double scoring 12 points and 11 rebounds, while shooting 7-for-7 from the free throw line.

It was a big game for the Lady Pioneers as they have now won back to back games headed into the last month of the season when they have five road games and one home game remaining.

Next up for the Lady Pioneers is a matchup on the road with Wilberforce University on Saturday, Feb. 8, at 1 p.m.

The Lady Pioneers improved to 13-8 on the season.

“As we feel like we can make a deep run into the playoffs and beyond, chasing a national championship as a second-year program, we have to continue playing in transition,” said Tribble. “We enjoy playing an exciting style of basketball, fast paced and up tempo, which means we have to take care of the ball and get everyone involved. So as we go forward, I will continue working to use our depth to keep fresh legs on the court and force other teams to run with us.”