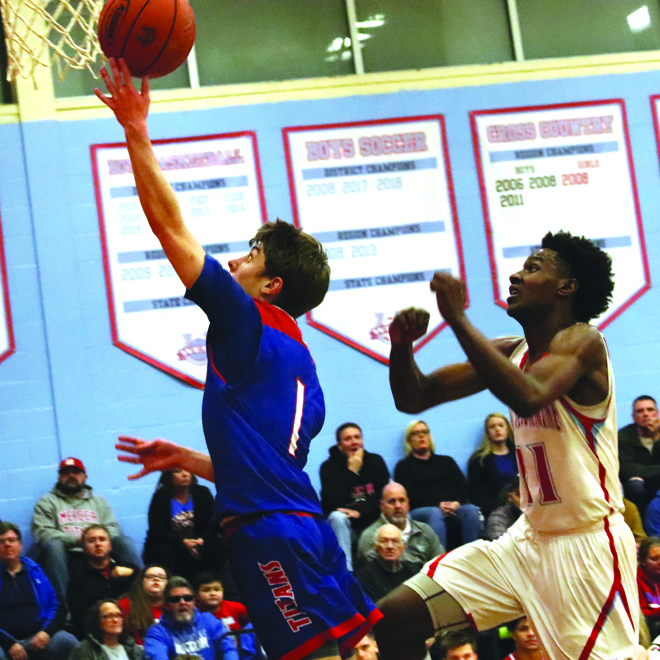 The win for the Colts sweeps the two regular season meetings with the Titans this season.

“We have not played well versus West this season. We have came out intimidated both games and dug ourselves a huge hole. We have scrapped to erase these large leads, but were not able to get the stops in either game to really make it a game,” said Head Coach Josh Hamlin.

Despite the loss, an individual milestone was reached for the Titans.

Senior Kaelin Drakeford eclipsed 1,000 points in his Titan career after a game high 27 points and a team high 13 rebounds for his 11th double-double of the season.

“Kaelin has had a great career. Seeing him reach 1,000 points is a testament to his hard work,” said Hamlin. “He’s had a tremendous year, and we are just really happy that he was able to achieve this individual goal.”

Clayton Winter led the Colts with 24 points and a game high 17 rebounds.

West Jessamine got off to a hot start, scoring the first seven points of the game, and eventually took a 16-5 lead, forcing the Titans to call a timeout with 2:25 left in the first quarter. Gavin Salva had a strong start for West, going on a personal 5-0 run before the timeout.

Colts led 22-8 after one quarter, with Salva leading the way with 10 points. Drakeford and junior Sam Baughman were the top scorers after the first period for the Titans with three points each.

DeAjuan Stepp’s two points in the paint with 3:30 left in the first half gave the Colts a commanding 30-11 lead, that blossomed to a 21-point lead at the half.

The second half was where Winter made his mark on the offensive end, scoring 15 of his 27 points in the second half.

“Clayton (Winter) has had a great year. He dominated us in the first half with 12 rebounds, but when we decided that we wanted to play basketball and that we can be pretty good, we limited him to four rebounds in the entire second half. It is just a matter of being intentional and working as hard as he does each possession,” said Hamlin. “He epitomizes not taking plays off and that is a credit to him.”

Despite the Titans winning the second half 47-38, the hole they dug themselves in was too much to overcome.

Senior Jamisen Lewis had a big second half, scoring majoring of his 19 points in the final two periods. Lewis and Drakeford were the only two Titans in double figures.

“If we could’ve started better either game, we probably, at worst, split with West this season,” said Hamlin. “It definitely is something that we will have to overcome, but right now that mental hurdle is in our heads with West.”

The Colts improve to 2-1 in district play, while the Titans fall to 2-2.