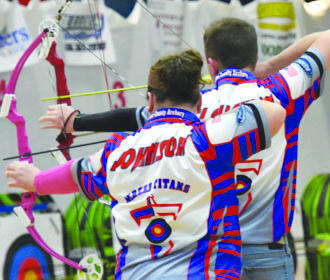 The Titans placed fourth out of eight teams with a total score of 3272.

Senior Bailey Robinson was the top female archer and top Titan archer with a score of 290 out of 300, placing her fourth overall out of 260 competitors. Robinson was tied for third, which resulted in a shoot off. A shoot-off consists of five arrows from 15 meters out.

“Shoot offs are very intense as the gym is full of people and the two archers are the only ones on the floor” said Head Coach Eric Miller. “Bailey (Robinson) did an outstanding job keeping her composure.”

Robinson’s arrow deflected off another dropping her to fourth place.

“Arrow deflections are sometimes just a part of the sport,” said Miller. “With Bailey, it’s her selflessness. She helps young archers not only at our practices but at tournaments. She helps keep them calm and focused to bring out their best performance and that’s true sportsmanship.”

Freshman Kamron Maddox was the top male archer for the Titans, placing 10th out of 284 male competitors with a score of 283

“With Kamron, his confidence has been the most impressive thing about him,” said Miller. “He was already a very grounded individual and you can now see the confidence growing at each tournament.”

“We faced off against some of the top archers in the state this past weekend,” said Miller. “I’m proud of these kids and the effort they put in.”

Mercer County will be back on the range this Saturday, Jan. 25, as they host the Mercer County 5th Annual Winter Wonder Shoot.

“Where this team stands right now is good. We are still fine tuning some of these kids as the total talent of this team has yet to be unleashed,” said Miller. “I believe in this team, we believe in each other and together this can be the best archery team Mercer County has ever had.” 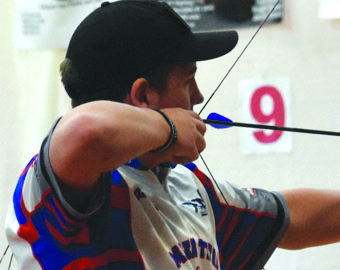 Mercer County freshman Garrett Clark concentrates on his next shot at the Lincoln County Invitational on Saturday, Jan. 18. (photo by Eric Miller)