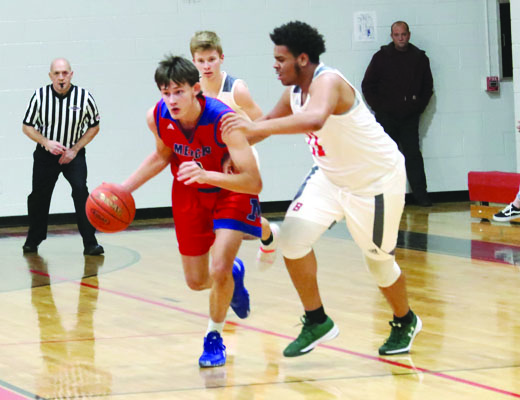 Mercer County freshman Evan Hart had his best game of the season, scoring a game high 14 points while grabbing four rebounds. Hart scored all 14 of his points inside the paint.

“Evan (Hart) has been doing some good things in practice. He’s a kid that we wanted to get some looks for throughout the year,” said Head Coach Josh Hamlin. “And due to some sickness, we got him some run against Corbin last week and he played well. He’s really talented around the rim with either hand. He’s got good hands and he’s played really well this past week. He gives us a different element out there.”

“Wesley’s (Tyler) play has increased tremendously. The thing I want him to do is lead us in rebounding,” said Thomas. “You have to play hard every possession. He has gotten better with his effort and it translates on the court. I can tell Wesley wants to be a good player. He really loves the game. He’s a good offensive player for us and has improved a lot since the beginning of the season.”

A fast break score by senior Micah Cheek forced another Burgin timeout, with the score 14-2 in favor of the Titans.

The Bulldogs responded. Tyler scored seven more points, including his first triple, to cut the Titan lead to 15-9 with just under two minutes to play in the first quarter.

Coach Thomas preached effort at the beginning of the year, something the Bulldogs had been lacking, but he’s seen progress every game.

“I thought the end of the first quarter was something positive to build on,” said Thomas. “I want to find areas where we’re growing every day in practice and in our games. But I thought that was a very positive stretch for us.”

Hart checked into the game in the second quarter and immediately made an impact. He scored eight points in the second period, finding his spots on the floor and being ready when the pass was coming to him.

“He moved well without the ball tonight and put himself in good positions to score,” said Hamlin.

Mercer County used a big spurt in the second quarter to take a 41-19 lead into the locker room.

Drakeford flirted with a triple-double in the first half, scoring eight points, hauling in six rebounds and dishing out five assists. The seniors didn’t play all that much in the second half, finishing with 12 points, seven rebounds and six assists.

The Titans started the third quarter on a 12-3 run, spearheaded by back-to-back steals and lay ups by Baughman and Drakeford.

“Skylar (Logan) plays so hard. The reason why I have to put him out there is because of his effort,” said Thomas. “His effort is really relentless and he’s a kid that really wants to learn to get better. That’s the reason why I love that kid. He really gives us a big boost off the bench.”

Junior Jackson Qualls and Jacob Qualls each had three points in the backcourt for the Bulldogs. The latter was second on the team with two assists.

The Titans took a 60-28 lead heading into the fourth quarter and cruised the rest of the second half.

The Titans take on West Jessamine in their next matchup and it has big implications in terms of district seeding. With a loss, the Titans would drop one full game behind West in the district standings with one district game left for the Titans.

“Friday is a must win. It’s one of those things when you get 18, 19 or 20 games in, you just want to see a lot of things cleaned up,” said Hamlin. “I thought we got sloppy at times during both halves of the game. We got three days to get ready for West. We wanted to tighten up the screws a little bit. If we can figure out a way to play defense for four quarters, I like our chances.”

The Titans have been without their second leading scorer, senior Jamisen Lewis, due to illness. Lewis is averaging 17 points per game on the season and will be pivotal against the Colts. The Titans travel to Nicholasville to take on the Colts at 7:30 p.m., on Friday, Jan. 24. 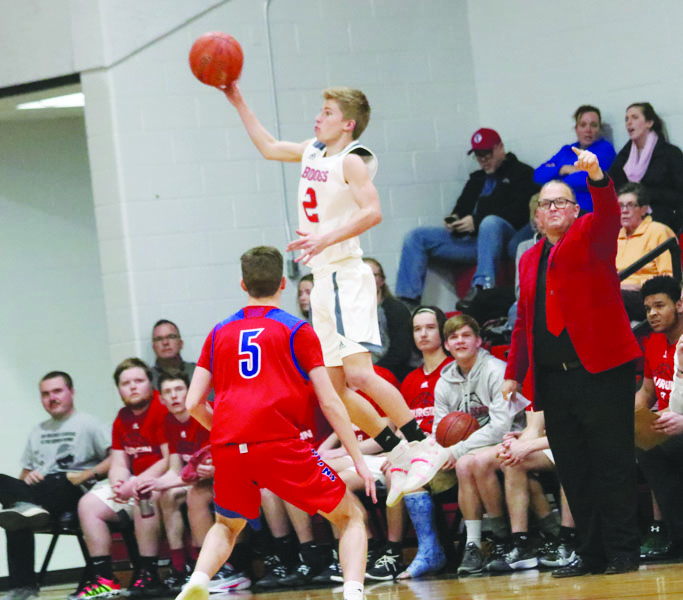 Burgin freshman Jacob Qualls leaps to save a ball against Mercer County on Monday, Jan. 16. Qualls had two assists against the Titans.