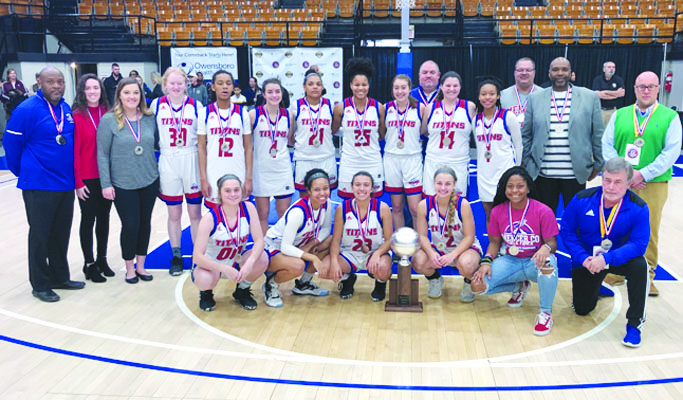 The Mercer County Lady Titans basketball team is pictured above with their runner-up trophy at the 2A State Championships this past weekend in Owensboro. (photo by Arpan Dixit)

After defeating Garrard County and Boyle County in the sectional round, the Mercecr County Lady Titans (14-5), for the second straight year, earned the opportunity to play in the 2A State Championships in Owensboro.

Mercer County’s run ended in the championship game to the Christian Academy of Louisville Lady Centurions (17-2) on Sunday, Jan. 19. In their previous two games, they defeated Rowan County (10-8) and Belfry (9-8).

Senior Channing Lewis, sophomore Love Mays and freshman Timberlynn Yeast were named to the 2A State Tournament All-Tournament Team after the conclusion of the championship game.

Here is a recap of their tournament, starting with the first game.

The Vikings came in winners of four straight, but the Lady Titans were able to come away with the 62-50 victory on Friday, Jan. 17, in the first round of the tournament.

Lewis came out firing, scoring Mercer County’s first nine points of the game, all from behind the arc. Unfortunately, she would soon pick up her second foul with two minutes left in the first quarter and had to sit.

The Vikings and Lady Titans were tied at 12 after the first quarter. Junior Ry’Ann Tharp provided  a spark off the bench, hitting a triple in the corner.

Tharp isn’t known for her scoring, but was glad she was able to contribute to a team win.

“I think it’s important to bring something to the game if you’re coming off the bench,” said Tharp. “Usually I’m not a big offensive player, but today was a good game for me on the offensive side.”

The Lady Titans held a 23-18 lead at halftime, but came out the aggressor in the second half, winning the third quarter 20-11 to go up 43-29 heading into the fourth quarter.

Timberlynn Yeast set a 2A state tournament single game assist record with six and the Lady Titans set a team record with 17 overall against the Vikings. Mays was second on the team with five assists.

“We talked about maybe not playing our best game, but finding a way to win,” said Head Coach Hayley Spivey. “Ry’Ann (Tharp) was big for us off the bench and she provided a huge spark that we needed. Channing (Lewis) got two tough fouls in the first quarter, didn’t play much the rest of the half, but comes out and plays the way she did was huge for us.”

Lewis, who has been averaging 25 points per game in her last five games, talked about working on her fitness in order to prevent fatigue during games.

“I’ve been working on finishing stronger at the basket. I’ve been doing CrossFit for a few months now and that’s helped a lot,” said Lewis.

Yeast, Lewis, Tharp and Mays were the four Mercer players in double figures against the Vikings.

“The stat sheet doesn’t always show everything. Love (Mays) had to guard Haven (Ford) and that’s a huge task,” said Spivey. “We’re a very athletic team so we’re blessed to be able to dive into passing lanes with our length and athleticism.”

Belfry’s Katlyn Ball set tournament records in the first round, with 33 points and 27 rebounds against Warren East.

The Lady Titans had the tall task of stopping Ball, but were up to the challenge, holding Ball to just 9 points and 5 rebounds in a 69-33 victory.

“I challenged them today about just playing together and that’s what they did,” said Spivey.

Mercer County’s two leading scorers in the game, Yeast with 14 and Lewis with 18, also led the team in assists, with four and six, respectively.

“It’s just about sharing the ball and that we did that really well,” said Spivey. “We had 22 steals as a team, and your offense builds off of that.”

The Lady Titans broke the tournament record with those 22 steals.

Sophomore Anna Drakeford, who scored 10 points, talked about playing together.

“We just played unselfish basketball. We passed the ball, moved it and did what we had to do,” said Drakeford. “Our coaches have been on us for about two weeks about getting in the passing and getting steals and we were finally able to do that.

Lewis said the key to applying pressure is being active and constantly moving.

“Getting our hands in the passing lanes and making sure passes don’t go through will force turnovers and lead into our offense,” said Lewis.

The senior ended up tying Yeast for the tournament record for most assists in a game with six.

Mercer County and CAL have not met since the 2018 LIT, where the Lady Centurions throttled the eventual state champion Lady Titans just a few weeks before postseason play began that year. Two years later, they meet in another title game, this time at the 2A State Tournament. This contest was much closer, but the result ended up the same with CAL taking the 61-55 win to claim the 2A state title.

“This is a great tournament. I just think it is really good for our team to be in a tournament mid-January that mimics the region tournament,” said Spivey. “We played some great competition and that will only benefit us down the road. It’s also a plus that we played three games in three days. That prepares us for the postseason, and I am proud of the way my team competed throughout the tournament.”

Lewis stayed hot from the  previous matchup against Belfry, knocking down a triple to open the game on a pass from Drakeford, who ended the first quarter with a triple of her own. CAL was up 16-12 after one quarter.

Mays scored a fast break bucket on an assist from Timberlynn Yeast to pull the game within two, 20-18, and force a Lady Centurion timeout with 2:48 left in the first half.

Calhoun was named MVP of the tournament, finishing with a game high 20 points, 12 of them coming in the second half.

Despite CAL having momentum to start the second half, Mays continued to score inside the paint. She scored another paint bucket with 2:50 left in the third quarter to cut the CAL lead to four, 35-31, but Mia Beam answered with a triple for the Lady Centurions.

Calhoun’s bucket gave CAL a 10-point lead, their biggest of the night, with one minute to play in the third.

Mays weaved her way through to the basket right before the third quarter buzzer to make the score 45-39.

Mays stayed hot and opened the fourth quarter with another paint score, but CAL answered with four of their own by Calhoun.

“Love played great this weekend. She started to look like her old self again,” said Spivey. “She is just so quick, athletic and able to be successful on both ends of the floor. We’ve been talking to her about being in attack mode and getting to the rim. She is just hard to guard and she’s doing exactly what we need her to do.

Timberlynn Yeast’s and-1 cut the CAL lead down to five, 49-44, but Jaya McClure answered with an and-1 of her own a few possessions later to extend the CAL lead back out to eight, 56-48, with just two minuets to play.

Yeast scored a bucket at the buzzer, but CAL earned the 2A state title with a tough victory over the Lady Titans. 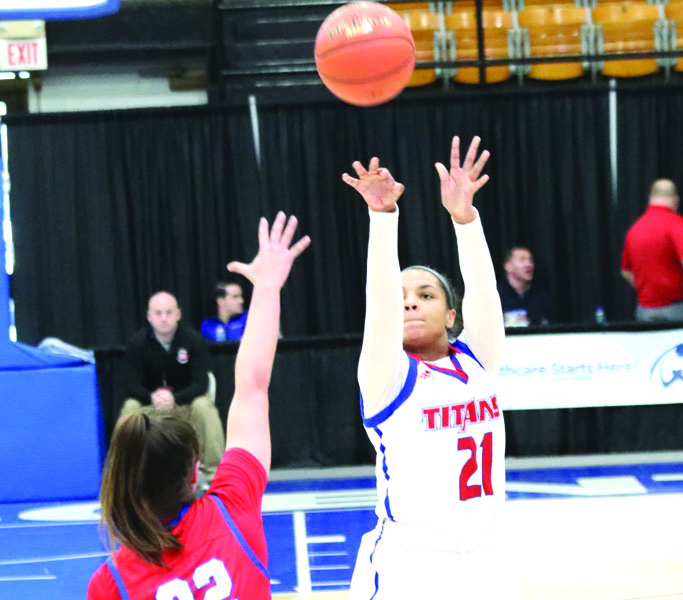 Mercer County senior Channing Lewis shoots a three pointer to open the 2A Championship game against CAL on Sunday, Jan. 19. Lewis was named to the All-Tournament Team. 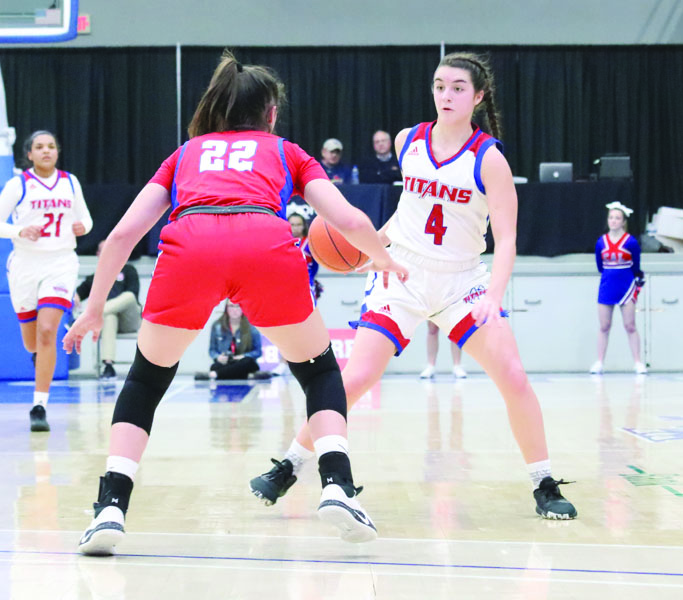 Mercer County freshman Anna Drakeford (4) stutter steps and plans her next move against Mia Beam (22) of CAL on Sunday, Jan. 19. 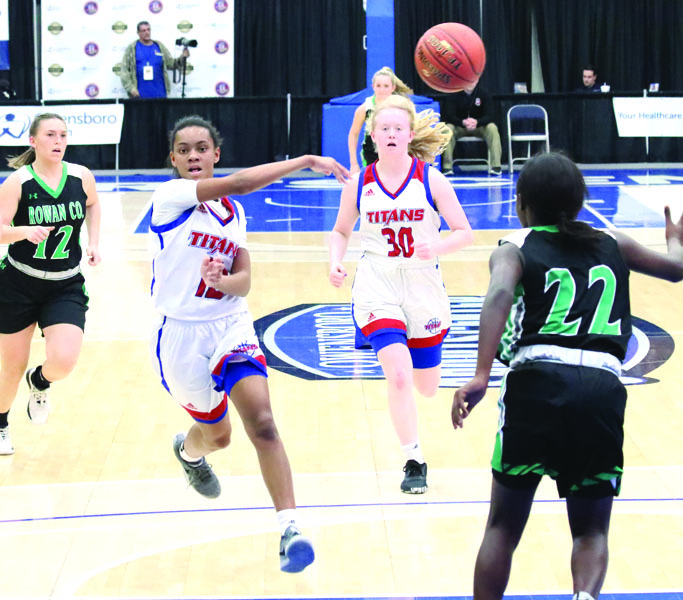 Mercer County freshman Timberlynn Yeast makes a no look pass to the corner against Rowan County in the 1st round of the 2A State Championship on Friday, Jan. 18. 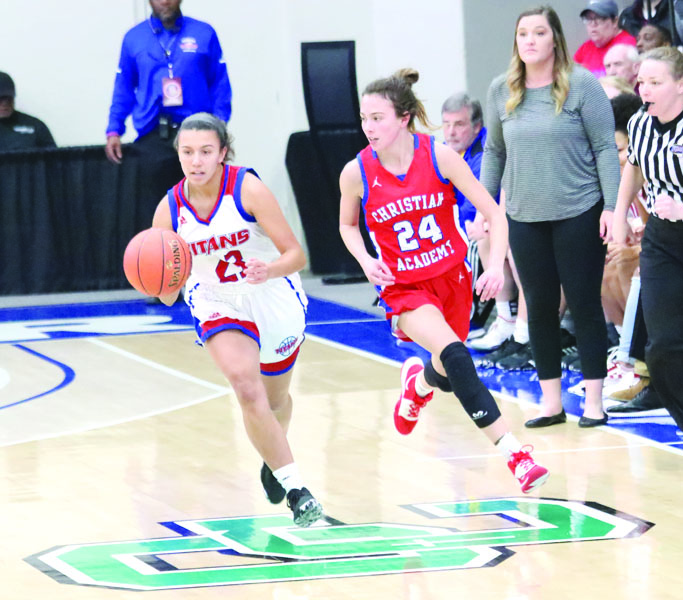 Mercer County junior Ry’Ann Tharp (23) steals the ball and leads the fast break against CAL in the 2A State Championship on Sunday, Jan. 19.