Mercer County takes No. 3 ranked team in state down to wire 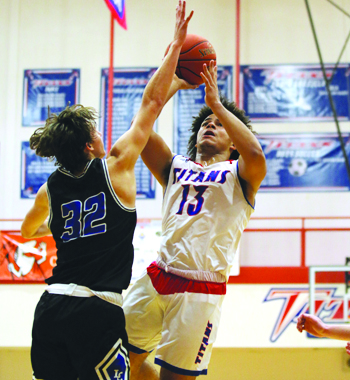 Mercer County senior Bryson Yeast (13) drives to the hoop and shoots over Lexington Catholic’s Ben Wedding on Saturday, Jan. 11, in the 2A Sectional Final. (photo by Pam Merchant)

The Mercer County Titans (9-6) had the chance to compete at the 2A State Championships with a win over the Lexington Catholic Knights (15-1), the No. 3 ranked team in the state AP polls, but fell just short in the sectional finals in a 60-57 affair on Saturday, Jan. 11, at Mercer County Senior High School.

Senior Jamisen Lewis led the Titans in scoring with 23 points. Junior Sam Baughman was the other Titan in double figures with 12 points.

“Our other guys really stepped up. Jamisen (Lewis) and Sam (Baughman) had good offensive games, but even better overall games,” said Head Coach Josh Hamlin. “Those two kids left it all on the floor, as did the rest of the kids. Jamisen and Sam made timely, huge shots and played with great poise. Bryson (Yeast), Kobie (Wessling) and Trey (Price) provided great minutes and sparks for us. They battled all night defensively and executed the game plan to perfection. I hated that we had to lose a game like that because I felt like we were the better team that night.”

Hamlin said anytime you go 8-of-25 from the free throw line, you don’t expect to have a shot to win the game.

“That’s how hard our kids battled,” he said. “It was a testament to their toughness and their will. We were really proud of their fight.”

Mercer County’s leading scorer, Kaelin Drakeford, was held to just six points. Drakeford had been averaging 21 points prior to the matchup with the Knights.

“Kaelin played a good game overall. He helped navigate their pressure, along with Jamisen (Lewis), and got the ball where it needed to be,” said Hamlin. “He just had a hard time with the ball going into the hoop on Saturday. He had some good looks, but they just didn’t fall.”

Drakeford also struggled at the free throw line, going 1-of-7, despite being around 80-percent on the season.

Despite the struggles on offense, Hamlin said Drakeford didn’t let other parts of his game fall because of it.

“Foul trouble could have been one of the reasons he took some of his offensive aggressiveness out of him because he became more of a distributor instead of attacker because he was more aware of picking up a charge,” he said.

Baughman was tied for the team lead in points with 19, hitting 6-of-8 triples, a season high.

“Sam (Baughman) works really hard. He is very streaky, but when he’s on, he can get hot quickly and his confidence builds in a hurry,” said Hamlin. “He’s had some streaks like he had in this game at times this season but I was really impressed with his defense tonight. He stuck his nose in there, rebounded the ball and got his hands on a lot of passes. He turned his defense into offense.”

Baughman was 3-for-3 from beyond the arc after the first quarter and hit his fourth triple as the first half buzzer expired.

Drakeford was tied with Baughman with 19 points of his own, and also had a team high 11 rebounds for his seventh double-double of the season. Hamlin advocated for Drakeford to be 12th Region Player of the Year after his buzzer beater at East Jessamine and sticks by his statement.

“I’ve said this since the very first game when he knocked down 46. Kaelin (Drakeford) is the best all-around basketball player in this region,” said Hamlin. “He’s done nothing short of showing everyone that. It’s just a matter of if he’ll win it or not. It’s going to be very tough to win three straight region players of the year from the same school, but right now, there is not a kid more deserving than Kaelin to win that award.”

Lewis was the last Titan in double figures with 15 points, with nine of them coming from beyond the arc. Lewis has been one of the most consistent players for the Titans this season and Hamlin knows his importance going forward.

“Jamisen (Lewis) is one of the most underrated players in this region and he continues to prove that with his play night-in and night-out,” said Hamlin.

The Titans held a 22-point lead after three quarters and cruised from there.

Wessling led the Titans with a team high four assists. Hamlin said Wessling is the glue guy for the Titans.

“He knows he’s the glue guy for our team. He’s not the most talented kid we’ve got, but he serves a role and has real value for us,” said Hamlin. “He adds a toughness to our team that sometimes we’ve been lacking. That’s been really important for us. Any offense you get from Kobie (Wessling) is a luxury because he makes his calling card on the defensive end. He is really tough to replace because he does a lot of things right defensively.”

Senior Dillon Warren knocked down his only triple after checking in late in the fourth and freshman Evan Hart made good use of his short minutes, scoring four points and hauling in two rebounds, one coming on the offensive glass. 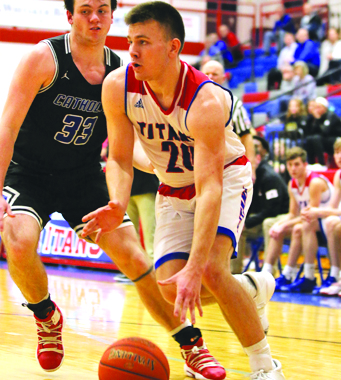 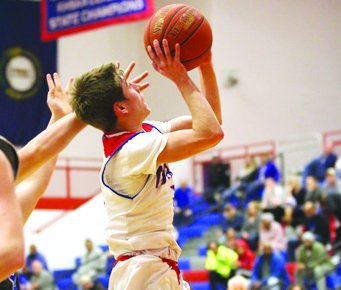 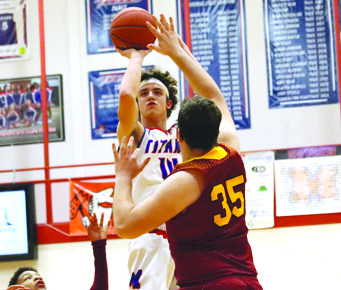 Mercer County senior Kaelin Drakeford shoots over Garrard County’s Mason Sulla for two of his 19 points in the first round of the 2A Tournament Sectional on Thursday, Jan. 9. (photo by Arpan Dixit)