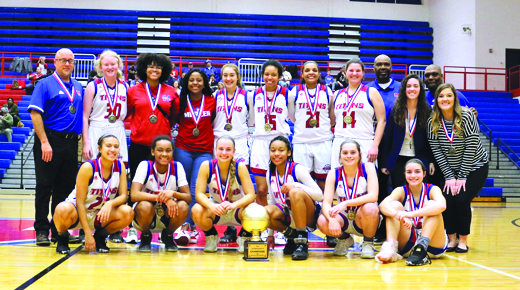 The Mercer County Lady Titans are pictured with their 2A Sectional Championship trophy after defeating Boyle County to advance to the 2A State Championship in Owensboro this weekend. (photo by Pam Merchant)

The Mercer County Lady Titans (12-4) have high hopes for the new year. One of those obstacles towards their ultimate goal includes the annual 2A State Championship.

After competing in the 2A tournament last season, the Lady Titans are back in 2020 after defeating Boyle County (7-9) in the sectional final on Saturday, Jan. 11, and Garrard County (7-7) in the first round last Thursday, Jan. 9.

The Lady Titans will take on Rowan County in the first round of the 2A State Championship on Friday, Jan. 17, at the Owensboro Sportscenter.

Here is a recap of their last two wins.

After defeating Garrard County for the second time in a month, the Lady Titans took on their rivals, the Lady Rebels. Mercer was able to advance and win the sectional round with a convincing 74-42 win.

Mercer County dominated from start to finish, leading 41-15 at halftime and 52-32 at the end of the third.

“It’s great to be back at the 2A State Tournament,” said Head Coach Hayley Spivey.

Last year, both the winner and runner-up were able to advance to Owensboro. This year, only the winner goes.

“There was a little bit more pressure this year knowing only the winner gets to advance,” she said. “I think the girls were ready to play. It’s especially tough to play a 12th Region team at any point during the season. We knew Boyle County could pose some problems with their size, so it was good to see the girls come out of the gate with energy and intensity. That’s something we lacked against Garrard County and we challenged the girls to start strong and they did.”

The Lady Titans have played the Lady Lions twice this season and have won by a combined 60 points, most recently in an 88-64 contest in the first round of the 2A Sectional Tournament.

Lewis had a monster game, filling up the stat sheet and taking over the game when the Lady Lions got off to a hot start.

“Our goal every game is we want to score 20 points a quarter. Well, we did that, but also gave up 21 points,” said Spivey. “We’re playing a fast paced game, we just didn’t have any defensive intensity. It wasn’t a great team effort, but they’re competitors.”

Spivey talked about the impact Lewis has had this season, leading the team as the most experienced player.

“She (Lewis) was super impressive. I think tonight, as a senior, that’s a good thing. She was able to come in and take over the game,” said Spivey. “I took her out early and told her to take over the team as a senior. She responded really well and she just took over. When we struggled to score, she found a way to put the ball into the basket.”

After losing the first quarter by one, the Lady Titans went on a 29-10 run in the second quarter to take a commanding 49-31 lead heading into the locker room.

Mercer cruised in the third quarter, finishing the period up 66-47, and scored 22 more points in the fourth and closed out the game to earn their 11th win of the season and a berth in the 2A Sectional Final.

Sophomore Love Mays had one of her best games of the season. She scored 15 points and had three steals.

“She had an awesome game. She dealt with an injury early on so she’s now getting into the swing of things,” said Spivey. “She’s really fast and she’s a great defensive player. Offensively, we’ve been telling her to attack because of her quickness.”

Yeast poured in 20 points, with most of them coming in the second half. She also had 11 rebounds. 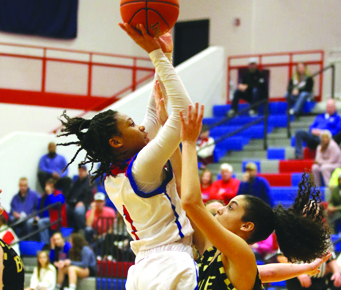 Mercer County sophomore Love Mays (left) shoots over contact against Boyle County in the 2A Sectional Final on Saturday, Jan. 11. Mays finished the game with 12 points. (photo by Pam Merchant) 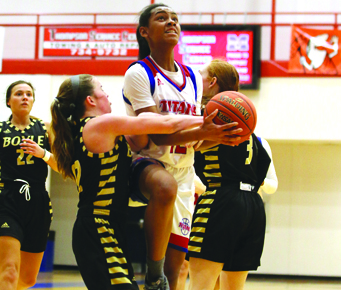 Mercer County freshman Timberlynn Yeast shows off her strength driving to the hoop and shooting while being fouled against Boyle County on Saturday, Jan. 11, in the 2A Sectional Final. (photo by Pam Merchant) 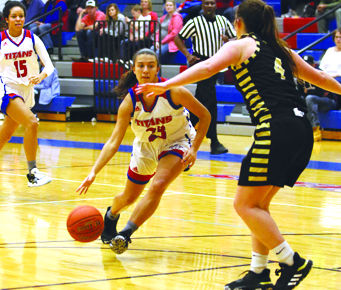 Mercer County junior Ry’Ann Tharp (23) drives to the middle of the lane to look for a shot in the 2A Sectional Final against Boyle County on Saturday, Jan. 11. (photo by Pam Merchant)