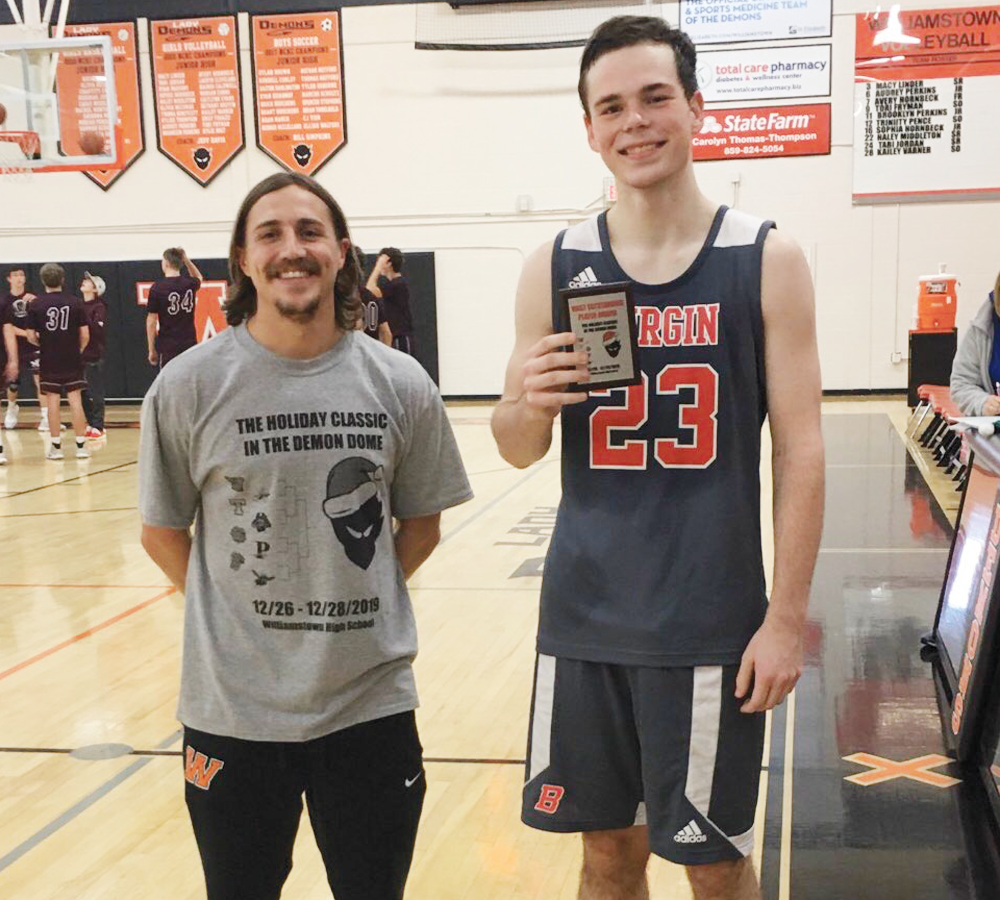 The Burgin Bulldogs (1-10) competed in the Williamstown Holiday Tournament from Thursday through Saturday, Dec. 26-28, at Williamstown High School.

The Bulldogs went 0-3 in the tournament, competing against Paris, Metcalfe County and Williamstown.

Senior Wesley Tyler was named to the all-tournament team for his performance in three games, averaging 13 points and 7 rebounds while shooting 52-percent from beyond the arc and 40-percent from the floor.

“I’ll say this about Wesley (Tyler). He has really grown a lot on the offensive end. He’ll tell you that he wants to grow defensively as well,” said Head Coach Troy Lee Thomas. “He’s grown in other areas as well. Rebounding and playing defense are the two big things that I want him to do as well as everybody else. He’s just playing with a lot more confidence. Whatever you do in practice, you do in the game, and that’s what I try to tell him and the rest of the guys. Wesley has really stretched his skill level and I like to call him a stretch four. He can post up and also shoot the three. He played really well for us in these three games.”

The Bulldogs have also been battling illness, with a couple of their key players sidelined. Junior Jackson Qualls missed the final game of the tournament. Junior Noah Mayes missed the entire tournament. Sophomore John Boursaw and freshman Jacob Qualls battled illness as well, but were able to suit up for all three contests. All four are key contributors for the Bulldogs.

Here is a recap of Burgin’s three games.

Burgin faced off against the Paris Greyhounds in their first game of the tournament and struggled. Paris controlled the game, forcing 31 Bulldog turnovers and came out with a 75-28 win.

“They (Paris) are very athletic, long and quick. When you play teams like that, you have to be able to adjust against the competition. They are very well coached and they have a great tradition. We had a tough time against a superb opponent, but one thing I told our kids no matter what the score is, they have to keep fighting,” said Thomas.

Jackson Qualls was the top scorer against Paris with seven points and also the top distributor with two assists. Sophomore Roleeke Smith was the top rebounder with seven.

Ricky Washington was the top scorer for Paris and the game with 24 points. The Greyhounds improved to 2-6 after defeating Burgin.

In their second game in Williamstown, the Bulldogs faced off against the Hornets from Metcalfe County.

Thomas saw his team bring much more effort than the first game, but the Hornets were able to come away with the 78-61 victory. Burgin struggled again with 26 turnovers, but Thomas said he saw some growth in his team.

“Despite having some guys out, I thought our guys played hard. I felt like we grew a little bit,” said Thomas. “Despite not having the numbers like we do, our kids didn’t give up and I was proud of them.”

Boursaw was the top scorer with 19 points. Smith and Jacob Qualls were the other two Bulldogs in double figures with 10 points each. Tyler was the top rebounder with five. Jackson Qualls also had a team-high and season-high eight assists.

“If somebody is tough on us, we have to be tough back. I want our kids to fight for each other,” said Thomas.

Jax Allen was the top scorer for the Hornets with 17 points. Peyton Dial and Boston Devore were also in double figures with 15 and 14 points, respectively.

In their final game of the tournament, the Bulldogs faced off against the Williamstown Demons, the hosts.

Despite the Bulldogs battling and inching close at the end of the game, the Demons came away with the close 59-52 victory on their home floor.

Tyler, who was named to the all-tournament team after the game, scored a game-high 24 points and hauled in 9 rebounds. Smith was the other Bulldog in double digits with 15 points.

“With the majority of our key guys out this game, our guys gave a great effort. I loved how we fought the whole time,” said Thomas. “When you come into a new program, it takes a year or a year and a half to really have everyone buy in. It’s a process of just growing. I never allow our teams to look at the score in the first quarter. I want them to just concentrate on the game. Before you can buy into something, you have to believe in it.”

Thomas said he believes guys are starting to buy in and understand the system he is trying to implement in his first season on the Burgin sidelines.

“I feel like some of our guys are honestly gaining more confidence in themselves. We may not be winning, but one thing I try to tell them is at the end of the game, that scoreboard may say one thing, but if you can say I gave my best effort to the best of my ability is winning to me. That’s what I’m really trying to emphasize.”

The Bulldogs will be back on the court on Friday, Jan. 10, when they travel to Owsley County to take on the Owls at 8 p.m.